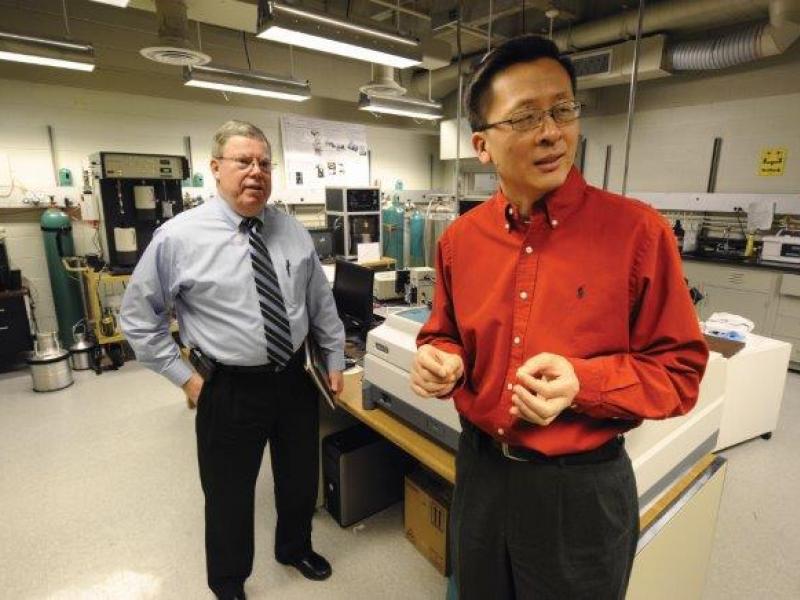 Recently, the Rensselaer Polytechnic Institute Center for Future Energy Systems (CFES) was selected to receive a state grant redesignating the center as part of the New York State Center for Advanced Technology (CAT) Program. (Pictured above) Marty Byrne, associate director (background) and Jian Sun, CFES director and professor in the Department of Electrical, Computer, and Systems Engineering at Rensselaer.

Troy, NY – Today, the development of clean energy is critical to the economy and the environment of the state and the nation. Recently, the Rensselaer Polytechnic Institute Center for Future Energy Systems (CFES) was selected to receive a state grant redesignating the center as part of the New York State Center for Advanced Technology (CAT) Program. The 10-year designation amounts to over $9 million in investment into Rensselaer, the Capital Region, and New York state.

“RPI’s development of renewable and efficient energy technologies through its Center for Future Energy Systems (CFES) has once again earned the university designation as a Center for Advanced Technology (CAT),” said Empire State Development President, CEO, and Commissioner Howard Zemsky. “Selected as one of 15 CATs throughout New York State, we congratulate RPI and look forward to its continued success in research and development for years to come.”

CFES is the locus of energy research at Rensselaer, where world-leading science and engineering researchers from all fields gather to collaborate on advancing energy technologies for the benefit and promotion of economic growth in New York. The center’s research thrusts range from advanced materials for energy conversion and storage, to energy efficiency, renewable energy, smart grids, and grid resiliency.

“The Center for Future Energy Systems was chosen during a very competitive process to be one of 15 New York state Centers for Advanced Technology, and redesignation will enable the center to expand further its partnership, multiply its economic impacts, and help New York state realize its vision for a cleaner, more efficient and affordable future energy system,” said Jian Sun, CFES director and professor in the Department of Electrical, Computer, and Systems Engineering at Rensselaer.

CFES actively partners with small and mid-sized companies, global corporations, New York state and federal agencies, and educational institutions to accelerate energy research, move technologies from the laboratory to the marketplace, and ultimately build value and create jobs. Over the last decade, the center has worked with over 70 New York State companies, with a cumulative economic impact of $84 million, leading to the creation of more than 200 jobs.

In addition, the center continues to expand its participation with industry partners and K-12 education through a series of energy seminars, workshops, and conferences. The center also created the Energy Scholars Program to engage Rensselaer junior and senior students in energy-related research and technology development through collaboration with industry. Companies that have supported the initiative include: National Grid, New York Power Authority (NYPA), Corning, GE Energy, GE Global Research, and Chart Industries.

Senator Kathy Marchione said, “Clean energy is the future that’s here today. Promoting a healthier environment and a stronger economy are vital parts of a long-term clean energy strategy that will position New York State as a national leader in this important field. Being re-designated as part of the New York State Center for Advanced Technology (CAT) program affirms that RPI’s Center for Future Energy Systems has once again been recognized for its valuable contributions in advancing this high-tech field of study and research. I applaud RPI, its dedicated faculty, and public and private sector partners for achieving this continued recognition. I am proud to support RPI, as I did during the recent State Budget that re-appropriated $600,000 for the Institute’s Smart Lighting Research Center. RPI is a national leader in cutting-edge technological research and higher education, and our entire Capital Region benefits from its continued successes.”

Senator Neil Breslin said, “I applaud the Rensselaer Polytechnic Institute Center for Future Energy Systems (CFES) on being re-designated for an additional 10 years, as part of the New York State Center for Advanced Technology program.  The positive economic and environmental impact this center has had over the past 10 years has been felt statewide and I am happy to see they will be able to continue to build upon these past achievements.”

Assemblymember John McDonald III said, “The CAT program re-designation is a reflection of the excellent work that the RPI Center for Future Energy Systems has accomplished in the past, and we look forward to future advancements. The Capital Region is fortunate to have such a rich international resource in our education and research community, and I am confident that the additional reinvestment in the CAT will lead to greater discovery and success not only for RPI, but for the Capital Region as well. We need to increasingly think regionally and nationally, which is why I also worked with my Senate counterparts during the past State Budget to secure a $600,000 grant for the nationally recognized Rensselaer Smart Lighting Engineering Research Center.”

Assemblymember Steven McLaughlin said, “I am pleased to see that one of the Capital Region’s most prestigious educational institutions is receiving this grant money,” McLaughlin said. “The $10 million grant over 10 years will help CFES partner with industry leaders, quickly move technology to the marketplace, and eventually grow the economy and create jobs. As someone with a background in solar energy, I realize the importance of investing in renewable and more environmentally friendly energy sources. I look forward to state-of-the-art energy research being done at RPI and will continue my unwavering support of the school and its efforts.”