Student-Led Company Receives Grant To “Amp It Up” 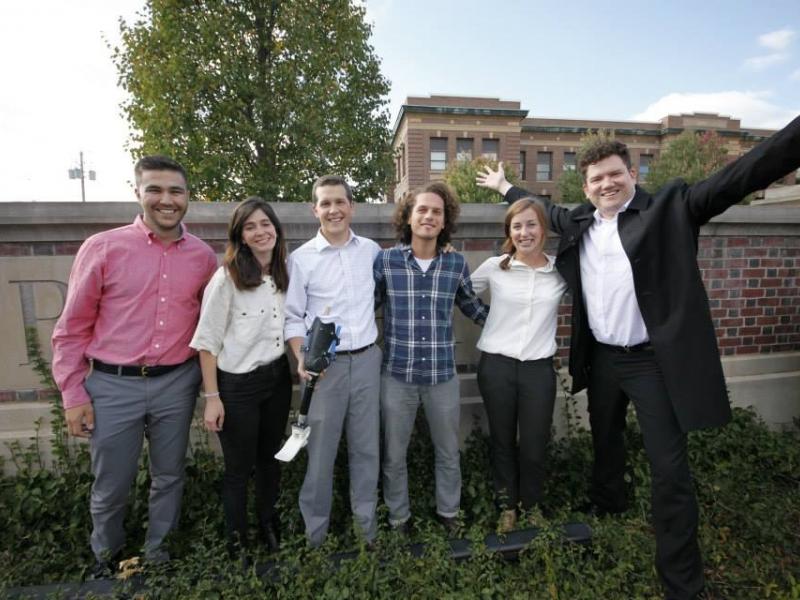 Amp It Up team members celebrate their success with creating an inexpensive device that could make prosthetic legs readily available to amputees in developing nations.

Student-Led Company Receives Grant To “Amp It Up”

Doctoral candidate Matthew Dion ’12 and his partners in Amp It Up have been awarded a prestigious EXIST-Gründerstipendium (EXIST Business Start-up Grant) to help fund their invention—an inexpensive device that could make prosthetic legs readily available to amputees in developing nations.

A program of the German Federal Ministry for Economic Affairs and Energy, EXIST provides awards of up to 200,000 euros to help students, graduates, and scientists bring innovative projects and services to market. The grant will enable Dion and his partners to officially launch Amp It Up early next year.

The company will receive EXIST funds in two installments, starting with 30,000 euros to develop a prototype and business plan. Once that work is approved by the EXIST board, Amp It Up will have access to up to an additional 170,000 euros to move ahead with production.

Amp It Up has developed a prosthetic socket that makes it easier and cheaper to connect a patient’s residual limb to a prosthetic leg. Known as Amparo, the socket is made of a thermoplastic material that becomes pliable when heated and, as a result, offers significant advantages.

Amparo can be easily molded and customized for each patient, without the expensive casting and tooling required for existing sockets. Fittings can be done more quickly and don’t require the specialized skills of prosthetists, who typically practice in major population centers. Many amputees must travel for days to see these specialists.

Amparo can be reheated and remolded to maintain the proper fit—an important consideration because the size and shape of residual limbs fluctuate over time. Amparo can be mass-produced, resulting in significant cost-savings.

“We wanted to design a socket that would be extremely inexpensive and that amputees could be taught to adjust themselves,” Dion said. “In many developing countries, the government will provide a prosthetic leg every four years. But the residual limb can change drastically in the first six months, leaving the patient with a prosthetic leg that’s no longer comfortable or functioning properly. One of our goals with Amparo is to give patients the freedom and flexibility to reshape the socket, on their own.”

The invention and resulting company grew out of the Global Engineering Teams (GET) program, which helps engineering students develop essential global teamwork skills. Each GET participant is assigned to a multidisciplinary, intercultural team. Each team tackles a different real-world problem, posed by a GET sponsor.

Students gain invaluable experience in planning and managing an engineering project, overcoming cultural barriers, and working with long-distance teammates. Sponsors receive potential solutions and recommendations on how to improve product and process development.

A GET partner university, Rensselaer chose Dion to participate in the program in 2014. His team was charged with increasing access to prosthetic limbs in developing countries. Dion’s teammates included Jessica Menold and Wesley Teerlink of Pennsylvania State University and Lucas Paes de Melo and Isabel Bahiana Wotzasek, both of Hasso-Plattner Institute in Germany. Now, the five are partners in Amp It Up.

Like the other GET participants, Dion and his teammates attended a kickoff meeting in South Africa, where they met one another and their adviser, learned which task had been assigned to them, and decided how best to move forward. After the six-day opening session, the three U.S. team members returned to their universities. Paes de Melo and Wotsazek remained in South Africa, conducting interviews in surgeons’ offices, clinics for amputees, and in squatter areas.

Eric Ledet, associate professor of biomedical engineering and Rensselaer GET coordinator, believes it was “those interactions, especially with people with disabilities,” that inspired Dion’s team to take the project further. “They saw a huge need—something they might not have appreciated without that experience,” Ledet said.

Dion agrees. “We realized the need required a response that extended beyond GET,” he said. “We wanted to do something bigger and better, so we took another path.”

Like the other GET participants, Dion’s team spent several months developing a solution and preparing to present their prototype at the final GET meeting. The other teams disbanded after that session, but the Amp It Up teammates chose to continue—a decision that was supported by team adviser GET General Manager Marco Eisenberg. He remains involved and played a key role in helping Amp It Up secure the EXIST startup funds.

Ledet, who is Dion’s doctoral adviser, also is extremely supportive. “It is very gratifying to find students willing to dedicate their own time to a project that doesn’t directly benefit them but has the potential to provide enormous benefit to people in need,” he said. “As a professor, I get a great deal of fulfillment from providing a platform for these students to demonstrate what they’re capable of.”

Dion’s project exemplifies The New Polytechnic, a new paradigm for teaching, learning, and research at Rensselaer, the foundation of which is the recognition that global challenges and opportunities are so great that they cannot be addressed by the most talented person working alone, nor even by a single discipline, sector, or nation. The New Polytechnic enables collaborations between talented people across disciplines, sectors, and global regions, in order to address the complex problems the world.