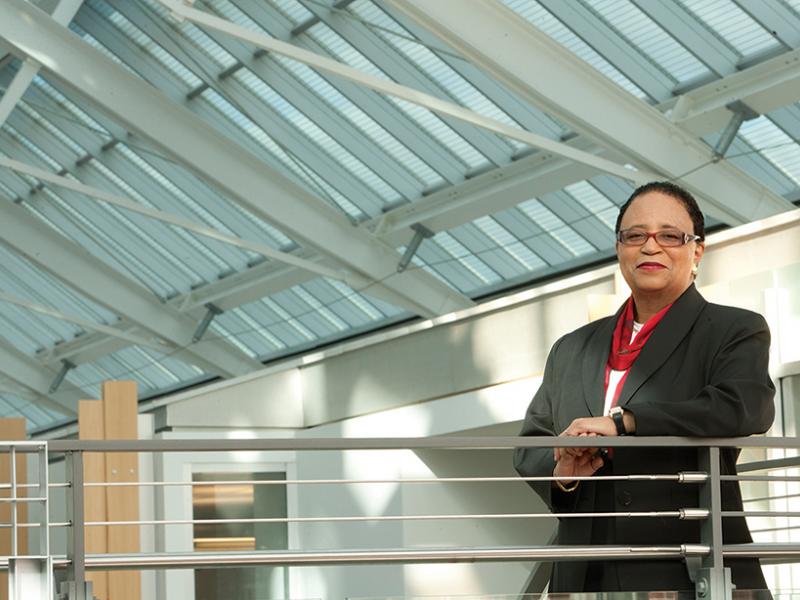 WASHINGTON, D.C. -- The White House today announced that President Barack Obama has selected The Honorable Shirley Ann Jackson, Ph.D., to receive the National Medal of Science, the highest honor for scientific achievement bestowed by the United States government. The award recognizes individuals deserving of special recognition for their outstanding cumulative contributions to knowledge in the physical, biological, mathematical, engineering, or behavioral or social sciences, in service to the nation.

“All of us at Rensselaer Polytechnic Institute are very proud that President Jackson has been chosen for the nation’s pre-eminent award for research and leadership in science,” said The Honorable Arthur J. Gajarsa ’62, Chairman of the Rensselaer Board of Trustees. “This honor is truly deserved. In addition to the important contributions Dr. Jackson has made in condensed matter theory, she has advocated vigorously for science and technology within the public realm, and, at Rensselaer, has established a new model for scientific and technological education, designed to address the great global challenges of our day.”

Dr. Jackson has served as the 18th president of Rensselaer Polytechnic Institute since her appointment in 1999. At Rensselaer, Dr. Jackson has undertaken a transformation of the university’s pedagogical approach with the implementation of The New Polytechnic, emphasizing collaboration across disciplines, sectors, and regions to address key intersecting challenges and opportunities in energy security, health, food, water, and national security, as well as the linked challenges of climate change and allocation of scarce resources so critical to our future.

“Shirley Jackson’s contributions to science, to education, to business, and to society have been extraordinary,” said Ginni Rometty, Chairman, President, and CEO of IBM. “At IBM, we have benefitted from her insight, wisdom, and pioneering spirit in so many dimensions. As the transformational leader of one of America’s great educational institutions, she is richly deserving of this signal honor.”

“Dr. Shirley Ann Jackson has worked tirelessly in the pursuit of research, STEM education for all students, in service to our government, and for Rensselaer,” said Wanda Denson-Low, Rensselaer Trustee and Former Senior Vice President at the Boeing Company.  “Dr. Jackson has been a role model for all women globally, not just for those who wish to pursue science and engineering, and she has inspired all those who have crossed her path.”

From 2009 to 2014, Dr. Jackson served on the President’s Council of Advisors on Science and Technology, which assists the White House in policy formulation in the many areas of science, technology, and innovation that are crucial to strengthening the economy and increasing opportunity. In 2011, she co-authored a report to the President offering an overarching strategy for revitalizing the leadership of the nation in manufacturing.

“Dr. Jackson epitomizes the greatness of American science by tackling the hard and important problems of society that science can and must address,” said Dr. Jonathan S. Dordick, Ph.D., Vice President for Research at Rensselaer. “She does this through intensity, dedication, and a vision that makes the complex seem solvable. She is a role model for science in our nation and her receipt of the National Medal of Science represents a well-deserved honor.”

The National Medal of Science, which will be presented to Dr. Jackson at an awards ceremony held at the White House, was established by the 86th Congress in 1959.  A committee of 12 scientists and engineers appointed by the President evaluates the nominees for the award. Since its establishment, the National Medal of Science has been awarded to 487 distinguished scientists and engineers whose careers spanned decades of research and development.

“Dr. Jackson was my first physics teacher at MIT in 1969,” said Dr. S. James Gates, Jr., University of Maryland Distinguished University Professor. “She has been a ‘north star' to many colleagues over the years as she modeled exceedingly well something she says: ‘Even smart people have to work very hard to accomplish something great.’ She is the epitome of this statement in so many diverse areas and deserves a hearty congratulations from all the communities she has touched.”

Office of the President