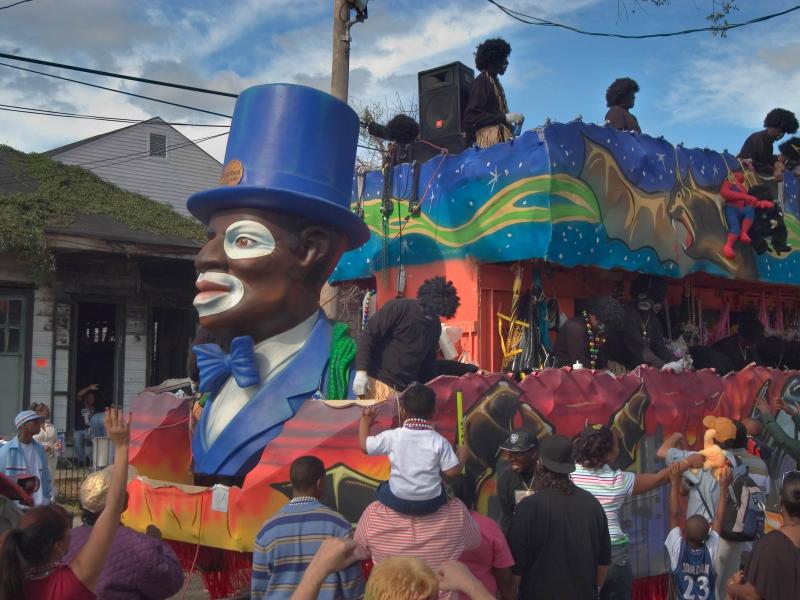 In the aftermath of Hurricane Katrina, the Zulus [the oldest African-American carnival organization] acted as stewards of their ravaged and demoralized communities and as ambassadors of the cultural traditions they had preserved for over a century. Using their reputation as one of the most anticipated Mardi Gras attractions, the Zulus re-energized their once subversive spectacle of black identity to draw attention to the politics of race and place in New Orleans. Photo credit: Alexey Sergeev

Troy, N.Y. — In the last three decades, ordinary Americans launched numerous grassroots commem­orations and official historical institutions became more open to popular participation, according to Ekaterina Haskins, associate professor of rhetoric in the Department of Communication and Media at Rensselaer Polytechnic Institute (RPI). In her latest publication, Popular Memories: Commemorations, Participatory Culture, and Democratic Citizenship, Haskins critically examines this trend by asking how and with what consequences participatory forms of commemoration have reshaped the rhetoric of democratic citizenship.

The publication investigates four distinct examples of participatory commemoration: the United States Postal Service’s “Celebrate the Century” stamp and education program, the September 11 Digital Archive, the first post-Katrina Carnival in New Orleans, and a traveling memorial to the human cost of the Iraq War. According to Haskins, the book’s comparison of the four case studies suggests that popular memories make for stronger or weaker sites of civic engagement depending on whether or not they allow for public affirmation of the individual citizen’s contribution and for experienc­ing alternative identities and perspectives.

“Popular Memories serves as the first book-length study of participatory memory practices,” said Haskins. “The book addresses how public commemorations of the last decade both reflect the rise of participatory culture and constitute an important site for contesting what it means to be a citizen in today’s liberal democracies. Throughout the book, I investigate how citizenship, understood as a relation among strangers bound together by a common national or cultural identity, is negotiated through a variety of cultural practices and media, including official and grassroots commemorations, museums, and electronic archives.”

Haskins, who is interested in the theory and history of rhetoric, visual rhetoric, and rhetorics of public memory and national identity, also noted that it is important to approach commemorations as both representations of civic identity and politi­cally consequential sites of stranger interaction.

“Despite differences in sponsorship, genre, historical scope, and political purpose, all these commemorations relied on voluntary participation of ordinary citizens in select­ing, producing, or performing interpretations of distant or recent historical events,” Haskins said. “These collectively produced interpretations—or popular memories—in turn prompted interactions between people, inviting them to celebrate, to mourn, or to bear witness.”

For example, here’s an excerpt from Chapter 3 which is titled: “Carnival after Katrina: Popular Festivity in a Time of Crisis,”

“For weeks after Hurricane Katrina inundated most of New Orleans and adjacent areas of the Gulf Coast in late August 2005, all major television networks and print media carried images of the flooded neighborhoods, thousands of displaced residents, and scores of those who failed to evacuate and were stranded on rooftops awaiting rescue…The images will no doubt form a prominent part of the pubic archive of Hurricane Katrina, for they offer a large-scale panoramic view of what many now consider a human-made catastrophe. Yet, the first collective commemoration of Katrina occurred a mere six months after the hurricane and took the form of a giddy popular ritual – the Carnival. Although at first blush it may seem an unlikely site of public commemoration or civic engagement, the first post-Katrina carnival of 2006 merits consideration as an example of popular memory because it acted as a collective forum for remembering the recent disaster and debating the city’s civic and cultural identity.” (Page 67)

Haskins is the author of award-winning Logos and Power in Isocrates and Aristotle. Her research on classical and contemporary rhetoric has been published in the Quarterly Journal of Speech, Rhetoric Society Quarterly, Philosophy and Rhetoric, History and Memory, Space and Culture, Journal of Communication Inquiry, and the American Communication Journal, as well as in a number of edited collections.

Haskins has received numerous awards, including the Karl Wallace Memorial Award from the National Communication Association in 2007, the Eastern Communication Association’s 2005 Everett Lee Hunt Award for Outstanding Scholarship in recognition of her book, the Rhetoric Society of America's Kneupper Award for Best Article published in 2000 in the Rhetoric Society Quarterly, and Outstanding Dissertation award from the American Society for the History of Rhetoric in 1999.