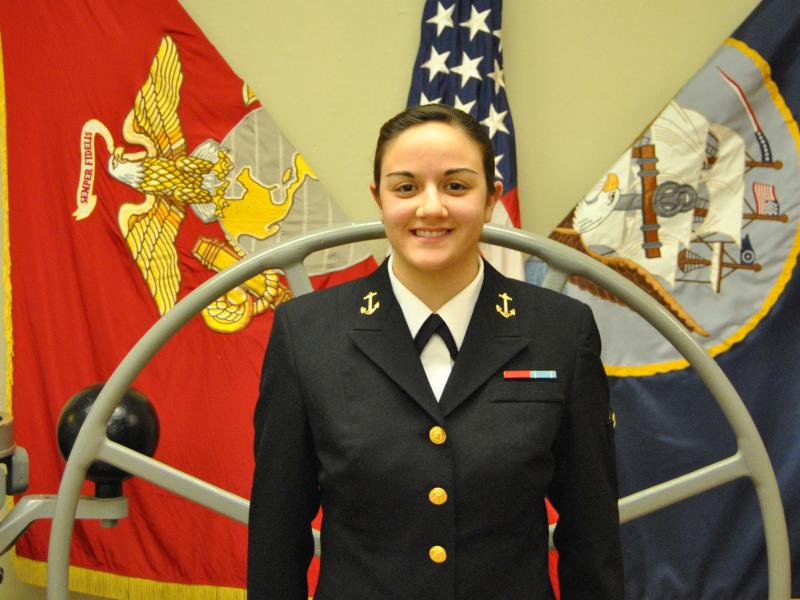 Midshipman Amanda Gallo, a senior majoring in nuclear engineering, was one of 125 midshipmen and only six women nationwide selected from this year’s NROTC graduating class for the U.S. Navy’s submarine force. The U.S. Navy only opened service in the submarine force to female officers in 2010.

Gallo entered Rensselaer in August 2012 as the recipient of a four-year Navy ROTC scholarship. She was active in the Navy Junior Reserve Officers Training Corps (JNROTC) program at Riverhead High School on Long Island when she first learned that the Navy had opened submarine service to women. Since then it has been her goal to join the program.

After completing the application process, which included interviews with top-level Navy officers in Washington, D.C., Gallo was selected by Adm. James Caldwell, director of naval reactors, to enter into the U.S. Navy’s submarine program.

“It’s a huge honor to be joining such a great community,” Gallo said. “I admire everyone in the force, especially all the people I’ve met already. They’ve been a huge motivation and inspiration to solidify my passion to do this.”

Gallo is the third woman from Rensselaer’s ROTC unit to enter into the U.S. Navy’s highly competitive submarine program, according to Capt. Dan Arensmeyer, professor of practice, naval science, and commanding officer of RPI’s NROTC unit.

“Ms. Gallo is an exceptionally well-rounded individual. Very strong academically in a challenging degree, she has also excelled physically and in leadership positions within the ROTC unit,” he said. “She is the ‘complete package’ and exactly what the Navy is looking for to lead our future submarine force.”

At Rensselaer, Gallo has been an active member of the campus and local communities. She has volunteered in the restoration of the USS Slater in downtown Albany, tutored Troy students at Blitman Commons on the weekends, and has been a tutor within the NROTC program.

Gallo also has been a member of the NROTC sailing team, competing in several regattas, and during the fall 2015 semester she served as the NROTC athletics officer, planning physical training events for 99 midshipmen throughout the semester.

Last summer, Gallo was awarded an internship in nuclear science at Brookhaven National Laboratory through the U.S. Department of Energy. Her research work, which involved computer modeling with Nuclear Regulatory Commission codes for the accident at Fukushima Daiichi Unit 1, was part of the Advanced Fuels Campaign and was performed in partnership with GE on next-generation nuclear reactor designs.

After graduation in May, Gallo will report to the Navy’s Nuclear Power School in Charleston, South Carolina, for six months of instruction, followed by another six months of training at one of the Navy’s operating prototype reactors. From there, she will complete the Submarine Officer Basic Course before reporting to her first submarine, most likely in early 2018, according to Capt. Arensmeyer.

The first women submariners reported to their ships in the fall of 2011; to date, 75 women have served or are currently serving in the force, which numbers approximately 60,000 personnel. In January 2015, the Navy began integration of female enlisted sailors, as well.

“I think it’s just awesome that women are finally getting recognized for their abilities,” said Gallo. “Women can be effective and efficient CEOs and admirals; we can be engineers and astronauts. It shouldn’t be astonishing that women are in history books—it should be a regular occurrence, and I hope that women like myself get after their dreams with all their might to keep writing those pages.”