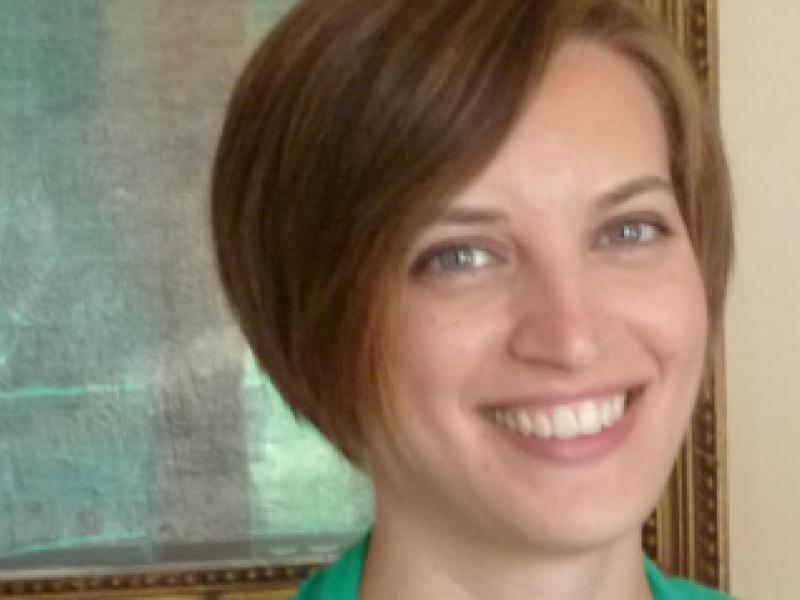 Quantum computers promise a vast improvement in speed over classical binary computers. The computers rely on quantum bits, or “qubits,” a system that can exist in more than one state at the same time, allowing the computers to consider multiple solutions simultaneously. Plasmons, quasiparticles arising from the collective motion of electrons on the surface of a metal, can strongly modify the behavior of nearby light, and could be instrumental in building some of the key components of a quantum circuit. But far more must be learned about their effects to develop them as a material.

“We really need to fundamentally understand how light and matter interact in the vicinity of these plasmonic nanoparticles – nanoparticles in which plasmons can be excited – in order to be able to develop the best devices possible,” said Esther Wertz, an expert in light-matter interactions who recently joined the faculty at Rensselaer Polytechnic Institute (RPI). “The challenge to that is that, because the sphere of influence around the plasmon is so small, experimentally it has been very difficult to probe that interaction.”

Wertz, an assistant professor of physics, applied physics, and astronomy in the School of Science at Rensselaer, uses an optical spectroscopy technique known as super-resolution imaging to investigate the light-matter interactions in the vicinity of metal nanoparticles in which plasmons can be excited. The technique, which was developed for biological applications, allows researchers to locate fluorescent objects with a precision greater than 250 nanometers, the conventional limit for optical microscopy. That makes it ideal for observing these light-matter interactions around plasmonic nanoparticles, particles about 50 to 150 nanometers across on which plasmons can be excited with light, and which exert their strongest influence – or “enhanced electromagnetic field” – in a circumference of about 20 nanometers.

Wertz is particularly interested in how plasmons may affect the properties of a single emitter – a fluorescent molecule, quantum dot, or similar systems that can absorb and release energy in the form of single photons of light. When a single emitter absorbs light, the energy is transferred to an electron, and the emitter is said to exist in a “matter” state. When the energy is released, it is emitted in the form of a photon, which is a “light” state.

The environment surrounding a single emitter strongly affects its properties. When placed in proximity to a plasmon, changes include how quickly and how well the single-emitter will emit light, the wavelength of the light emitted, and angle and position of emission of that light. Even more intriguing are the effects of two plasmons in proximity to one another and a single-emitter. At the junction between the two plasmons, the influence they exert is particularly enhanced.

“If I place one single emitter in a location where the enhanced properties are optimal, I can get into a regime where the light and the matter interact so strongly that you cannot distinguish what is light and what is matter,” said Wertz. “You enter a regime in which there is a coherent oscillation between the light and matter state. And the resulting system behaves as a coherent light-matter state – you can’t distinguish anymore when it is in a light or a matter state; it behaves as a mixture of both at the same time.”

This scheme is of particular interest to quantum applications, which rely on the simultaneous existence of multiple states. In plasmonics, the effect is very distance dependant, with properties one nanometer away from the particle varying widely from those 50 nanometers away. But while this phenomena has been observed, it is not understood well enough to predict or design systems.

“One of the goals is to be able to gain a fundamental understanding of ‘if I do this, necessarily that will happen,’” said Wertz. “With that knowledge in hand, these materials may be developed for all sorts of quantum devices – quantum computers, quantum cryptography. But first we need the understanding.”

Wertz’s work is an example of how Rensselaer embodies The New Polytechnic, a new paradigm for teaching, learning, and research. Rensselaer leads by using advanced technologies to unite a multiplicity of disciplines and perspectives, in order to take on large, multifaceted challenges to become transformative in three fundamental ways: in the global impact of our research, in our innovative pedagogy, and in the lives of our students.