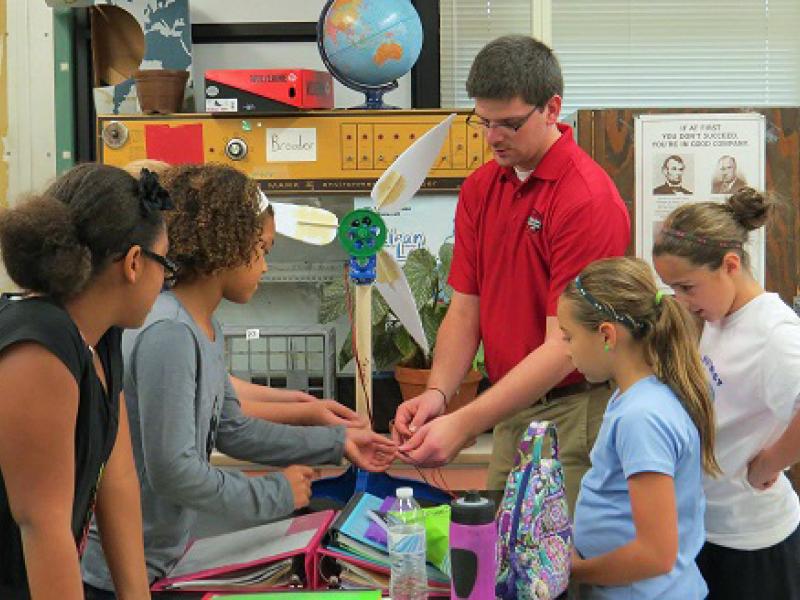 In celebration of National Engineers Week, the Rensselaer Polytechnic Institute (RPI) Engineering Ambassadors and Congressman Paul Tonko will visit Watervliet City Schools for a full day of hands-on activities, presentations, and discussion of careers in science, technology, engineering, and mathematics (STEM). The program will run from 8 a.m. through 2:20 p.m. on Monday, February 22, and is intended to encourage more students – and in particular women, underrepresented minorities, and low-income students – to pursue an education in the STEM fields.

“Lots of students feel they don’t have the resources for an engineering education, or they’re not smart enough in math and science, when in reality the most important traits for being an engineer are a passion for the work, creativity, and an ability to solve problems,” said Carson Hotard, a mechanical engineering student at Rensselaer and member of the Engineering Ambassadors. Since forming in 2012, the Rensselaer Engineering Ambassadors have visited more than a dozen Capital Region school districts annually, using real-life examples from fields as varied as wind energy and snowboarding to inspire more than 20,000 students to consider a career in engineering. “If you have an idea, hang on to it, and you can make it happen with engineering.”

Advancing STEM education is also a priority for Congressman Tonko, as the federal representative works with leaders in Washington and at the local level to boost engineering curriculum in schools. Tonko, himself an engineer, has introduced legislation with U.S. Senator Kirsten Gillibrand – the Educating Tomorrow’s Engineers Act – that addresses the nation’s critical need for STEM graduates. As part of the day’s events, Tonko will speak with Watervliet students and facilitate a panel discussion with engineering students.

“Advances in STEM disciplines and a higher number of STEM-educated professionals are primary drivers of our economy and the creation of quality jobs. Our need for these new workers grows every day, and we must continue to work to meet that challenge locally,” Tonko said. “My education in engineering didn't go away when I received my diploma – I employ the philosophies of a strong STEM education every day of my life. That is what we're doing in the Capital Region, and I applaud the Watervliet School District and Rensselaer for their inexhaustible efforts to make our communities worldwide leaders in STEM education.”

A small urban school district, Watervliet faces challenges similar to those of larger city districts, including high poverty. The majority of students enrolled in Watervliet Junior/Senior High School are economically disadvantaged, with approximately 70 percent of students in grades 7-12 eligible for the federal free and reduced-priced lunch program.

“Having Congressman Tonko and Rensselaer’s Engineering Ambassadors visit our high school will help increase awareness of the many opportunities STEM education and careers offer as our students consider their future,” said Superintendent of Schools Dr. Lori Caplan. With an enrollment of 50 percent female students and nearly 30 percent African-American and Latino students, Watervliet High School’s demographics are representative of the groups that are often underrepresented in STEM fields. “The interaction with college students and the hands-on activities our students experience will help encourage or ignite an interest in science, engineering, and technology, especially among students who may not otherwise think the pursuit of STEM education is possible,” Caplan said.

Economic projections point to a need for approximately one million more STEM professionals than the U.S. will produce at the current rate over the next decade if the country is to retain its historical pre-eminence in science and technology, according to a 2012 report by the President’s Council of Advisors on Science and Technology. To meet this goal, the United States will need to increase the number of students who receive undergraduate STEM degrees by about 34 percent annually over current rates.

According to the National Science Foundation 2016 Science & Engineering Indicators report, the proportion of bachelor’s degrees awarded in science and engineering fields relative to degrees in all fields has remained stable at about 32 percent from 2000 to 2013. Nine percent of those degrees are conferred upon African-Americans, and 11 percent are conferred upon Hispanic-Americans. While women earn the majority of degrees in biological, agricultural, and social sciences, they lag behind men in bachelor's degrees in engineering, computer science, mathematics and statistics, and physics.

At Watervliet Junior/Senior High School, a group of about 15 Engineering Ambassadors, split into teams, will spend the day in each of seven science classrooms. Each team will lead students in grades 7-12 through one of the following presentations: Future of Light; Thermoelectric Devices; Tissue Engineering; Wind Energy; Digital Sound; Snowboarding; and Advanced Manufacturing.

“They design a snowboard, test it, observe what does and doesn’t work, and then refine the design based on those observations. They may not have realized it before, but that’s the engineering design process,” said Hotard.

Hotard, who joined the Engineering Ambassadors in the spring of 2013,  said the payoff for hours of training, preparation, and presentations comes when he sees middle and high school students respond to the group’s message.

“You have moments when you finish the session and one student comes up to you and says, ‘wow, that was really cool, I want to be an engineer.’ Or when, by the end of a session, their hands are shooting up and they’re asking questions and you can see you’ve got the gears turning in their heads,” Hotard said. “If all of the work that I’ve done in the last three years could make a lasting impression on just five to 10 students, it’s worth it.”

Founded by National Society of Professional Engineers in 1951, National Engineers Week (February 21–27, 2016) is dedicated to ensuring a diverse and well-educated future engineering workforce by increasing understanding of and interest in engineering and technology careers, according to the society's website. Today, the week is marked through a formal coalition of more than 70 engineering, education, and cultural societies, and more than 50 corporations and government agencies.