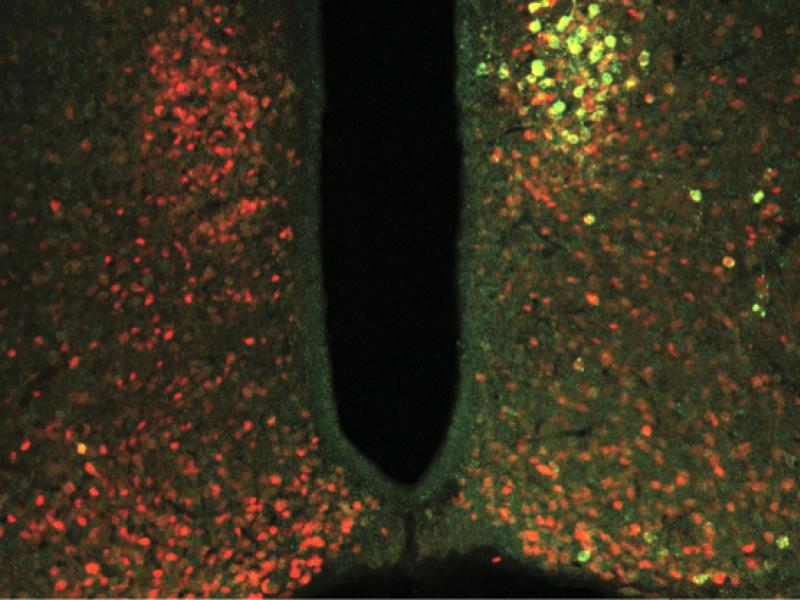 To learn what different cells do, scientists switch them on and off and observe the effects. There are many methods that do this, but they all have problems: too invasive, too slow, or not precise enough. Now, a new method to control the activity of neurons in mice, devised by scientists at Rensselaer Polytechnic Institute (RPI) and Rockefeller University, avoids these downfalls by using magnetic forces to remotely control the flow of ions into specifically targeted cells.

Jonathan Dordick, Howard P. Isermann ‘42 Professor of Chemical and Biological Engineering and a member of the Center for Biotechnology and Interdisciplinary Studies at Rensselaer, and colleagues successfully employed this system to study the role of the central nervous system in glucose metabolism. Published online in Nature, the findings suggest that a group of neurons in the hypothalamus plays a vital role in maintaining blood glucose levels. Glucose metabolism is fundamental to human health, and a mechanism for controlling metabolism through remote activation of specific regions of the brain may provide new routes to therapies for a range of important diseases.

“These results are exciting because they provide a broader view of how blood glucose is regulated—they emphasize how crucial the brain is in this process,” said Jeffrey Friedman, Marilyn M. Simpson Professor and head of the Laboratory of Molecular Genetics at Rockefeller University. “And having a new means for controlling neural activity, one that doesn’t require an implant and allows you to elicit rapid responses, fills a useful niche between the methods that are already available.”

“It may also be possible to adapt the method for clinical applications,” said Dordick. "We can imagine adapting this method in a number of in vitro applications in drug discovery. Depending on the type of cell type we target, and the gene expression we enhance or decrease within that cell, this approach holds potential in development of therapeutic modalities, for example, in metabolic and neurologic diseases.”

Dordick’s research exemplifies the work being done at The New Polytechnic: a new paradigm for teaching and learning at Rensselaer. Faculty and students are addressing difficult and complex global challenges, the need for interdisciplinarity and true collaboration, and the use of the latest tools and technologies, many of which are developed at Rensselaer.

Previous work led by Friedman and Dordick tested a similar method to turn on insulin production in diabetic mice. The system couples introduction of a natural iron storage particle, ferritin, and a fluorescent tag to an ion channel called TRPV1, also known as the capsaicin chili pepper receptor. Ferritin can be affected by forces such as radio waves or magnetic fields, and its presence tethered to TRPV1 can change the conformation of the ion channel.

“Normally, radio waves or magnetic fields, at these strengths, will pass through tissue without having any effect,” says first author Sarah Stanley (now assistant professor of medicine, endocrinology, diabetes, and bone disease at Icahn School of Medicine at Mount Sinai). “But when this modified ferritin is present, it responds and absorbs the energy of the radiofrequency or magnetic fields, producing motion. This motion opens the channel and allows ions into the cell. Depending on the ions flowing through the channel, this can either activate or inhibit the cells’ activity.”

This study is the first to turn neurons on and off remotely with radio waves and magnetic fields. TRPV1 normally allows positive ions—such as calcium or sodium—to flow in, which activates neurons and transmits neuronal signals. The researchers were also able to achieve the opposite effect, neuronal inhibition, by mutating the TRPV1 channel to only allow negative chloride ions to flow through.

“The modified TRPV1 channel was targeted specifically to glucose-sensing neurons using a genetic technique known as Cre-dependent expression,” says Stanley. “To test whether a magnetic field could remotely modulate these neurons, we simply placed the mice near the electromagnetic coil of an MRI machine.”

Using this novel method, the researchers investigated the role these glucose-sensing neurons play in blood glucose metabolism. Hormones released by the pancreas, including insulin, maintain stable levels of glucose in the blood. A region of the brain called the ventromedial hypothalamus was thought to play a role in regulating blood glucose, but it was not possible with previous methods to decipher which cells were actually involved.

Friedman and colleagues found that when they switched these neurons on with magnetic forces, blood glucose increased, insulin levels decreased, and behaviorally, the mice ate more. When they inhibited the neurons, on the other hand, the opposite occurred, and blood glucose decreased.

“We tend to think about blood glucose being under the control of the pancreas, so it was surprising that the brain can affect blood glucose in either direction to the extent that it can,” says Friedman, who received a bachelor’s degree in biology from Rensselaer in 1977. “It’s been clear for a while that blood glucose can increase if the brain senses that it’s low, but the robustness of the decrease we saw when these neurons were inhibited was unexpected.”