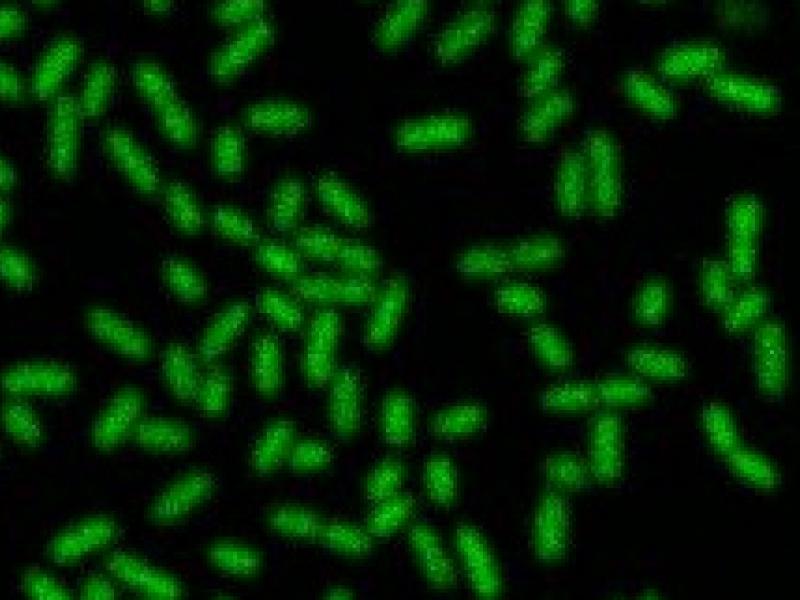 Suicide allows bacteria found in opportunistic infections to create an antibiotic tolerant biofilm, according to a team including researchers at Rensselaer Polytechnic Institute (RPI). In work recently published in Current Biology, the researchers found that a molecule secreted by the bacterium Pseudomonas aeruginosa causes a breakdown in the respiratory chain, killing some of the population and triggering the creation of a biofilm among survivors, and thus conferring increased tolerance to antibiotics.

“What we’ve found is a suicidal pathway in which the sacrifice of some leads to a benefit for the community,” said Blanca Barquera, an associate professor of biological sciences and member of the Center for Biotechnology and Interdisciplinary Studies (CBIS) at Rensselaer. “One of Pseudomonas’ own molecules targets one of its own proteins, and while some die, the ones that survive are induced to make a biofilm. This research helps us to understand how Pseudomonas creates biofilms, and that could help us prevent biofilms that play a role in persistent and relapsing infections.”

Pseudomonas is a common bacterium that typically creates serious infections in patients with immune systems weakened by other conditions, including cystic fibrosis, cancer, HIV, or a traumatic injury. Often, the bacteria cells secrete a sticky substance that binds them together in multiple layers. Formation of biofilms is one of several mechanisms that make it possible for Pseudomonas to resist multiple antibiotics intended to defeat it.

The researchers examined the role of 2-n-heptyl-4-hydroxyquinoline-N-oxide (HQNQ), a signal molecule for communication, which Pseudomonas produces under high population densities. Researchers have long known that HQNQ inhibits respiration. The molecule is even commercially available to researchers seeking to inhibit respiration in experiments on bacteria and the mitochondria of eukaryotes. But its role in programmed cell death and biofilm formation that plays a role in persistent and relapsing infections was previously unknown. Persistent and relapsing infections are often refractory to antibiotics due to antibiotic tolerance of a subpopulation of cells that are not antibiotic resistant mutants, but rather are “dormant” cells that survive antibiotic killing. HQNQ-dependent biofilm is formed by these cells.

The research team determined that HQNQ disrupts the cytochrome bc1 complex, which plays a role in the branched respiratory pathways available to Pseudomonas. For some cells, the disruption of the cytochrome bc1 complex ends in cell death. But cells that are able to activate alternate respiratory pathways, which are not inhibited by HQNQ, can survive.

“The survivors that are antibiotic tolerant cells make a biofilm,” said Barquera.  “We know that this is part of a signaling process, but how it is regulated is not yet clear and will require further research.”

Blanca Barquera and Teri Hreha at Rensselaer provided expertise to determine the role of the bc1 complex, which confirms the pathway and the mechanism for cell death, which the researchers have identified. The research demonstrates “differentiation” whereby the physiology of Pseudomonas allows different populations to follow different fates.

“For a long time we considered all bacteria of the same species to be the same, and if you study one, you know about everything,” said Barquera. “But that’s not the case. Now we are beginning to understand that signaling pathways make it possible for different subpopulations to emerge under specific conditions.”

In future work, Barquera said the team hopes to identify the signaling pathways in Pseudomonas that instruct some cells to activate the alternate pathways, allowing them to survive and create biofilms with antibiotic tolerant cells, knowledge that will pave the way to strategies for defeating infections.

Barquera’s research exemplifies the work being done at The New Polytechnic, addressing difficult and complex global challenges, the need for interdisciplinary and true collaboration, and the use of the latest tools and technologies, many of which are developed at Rensselaer.

The research, titled “Auto Poisoning of the Respiratory Chain by a Quorum-Sensing-Regulated Molecule Favors Biofilm Formation and Antibiotic Tolerance,” was led by Laurence Rahme, of Harvard Medical School, Massachusetts General Hospital, and Shriners Hospital for Children, and included researchers at Tufts University, the University of Lausanne in Switzerland, and Hebrew University in Israel, as well as Rensselaer.