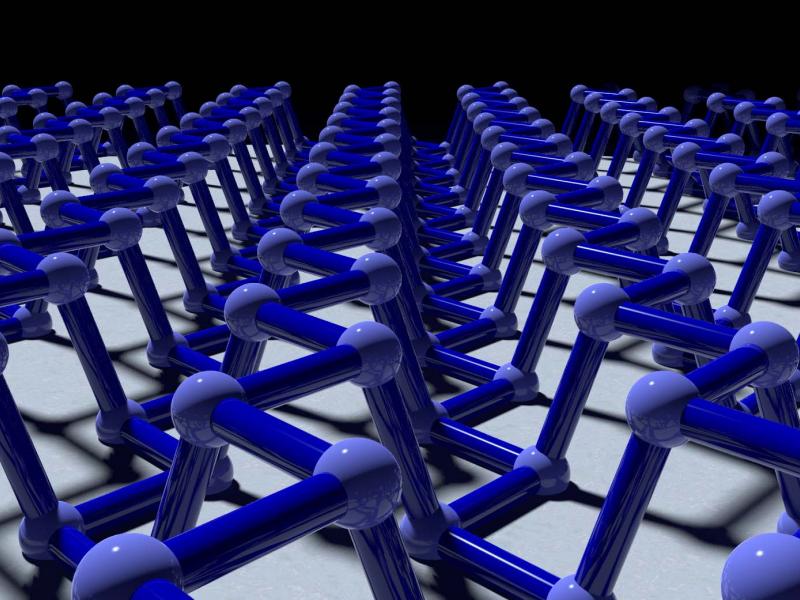 Two-dimensional phosphane, a material known as phosphorene, has potential application as a material for semiconducting transistors in ever faster and more powerful computers. But there’s a hitch. Many of the useful properties of this material, like its ability to conduct electrons, are anisotropic, meaning they vary depending on the orientation of the crystal. Now, a team including researchers at Rensselaer Polytechnic Institute (RPI) has developed a new method to quickly and accurately determine that orientation using the interactions between light and electrons within phosphorene and other atoms-thick crystals of black phosphorus.

Phosphorene—a single layer of phosphorous atoms—was isolated for the first time in 2014, allowing physicists to begin exploring its properties experimentally and theoretically. Vincent Meunier, head of the Rensselaer Department of Physics, Applied Physics, and Astronomy and a leader of the team that developed the new method, published his first paper on the material—confirming the structure of phosphorene—in that same year.

“This is a really interesting material because, depending on which direction you do things, you have completely different properties,” said Meunier, a member of the Rensselaer Center for Materials, Devices, and Integrated Systems (cMDIS). “But because it’s such a new material, it’s essential that we begin to understand and predict its intrinsic properties.”

Meunier and researchers at Rensselaer contributed to the theoretical modeling and prediction of the properties of phosphorene, drawing on the Rensselaer supercomputer, the Center for Computational Innovations (CCI), to perform calculations. Through the Rensselaer cMDIS, Meunier and his team are able to develop the potential of new materials such as phosphorene to serve in future generations of computers and other devices. Meunier’s research exemplifies the work being done at The New Polytechnic, addressing difficult and complex global challenges, the need for interdisciplinary and true collaboration, and the use of the latest tools and technologies, many of which are developed at Rensselaer.

In their research, which appears in ACS Nano Letters, the team initially set out to refine an existing technique for determining the orientation of the crystal. This technique, which takes advantage of Raman spectroscopy, uses a laser to measure vibrations of the atoms within the crystal as energy moves through it, caused by electron-phonon interactions. Like other interactions, electron-phonon interactions within atoms-thick crystals of black phosphorus are anisotropic and, once measured, have been used to predict the orientation of the crystal.

In reviewing their initial results from Raman spectroscopy, the team noticed several inconsistencies. To investigate further, they obtained actual images of the orientation of their sample crystals using Transmission Electron Microscopy (TEM), and then compared them with the Raman spectroscopy results. As a topographic technique, TEM offers a definitive determination of the orientation of the crystal, but isn’t as easy to obtain as the Raman results. The comparison revealed that electron-phonon interactions alone did not accurately predict the orientation of the crystal. And the reason why led the way to yet another anisotropy of phosphorene—that of interactions between photons of light and electrons in the crystal.

Meunier said the team had reason to believe phosphorene was anisotropic with respect to electron-photon interactions, but didn’t anticipate the importance of the property.

“Usually electron-photon anisotropy doesn’t make such a big difference, but here, because we have such a particular chemistry on the surface and such a strong anisotropy, it’s one of those materials where it makes a huge difference,” Meunier said.

“It turns out that it’s not so easy to use Raman vibrations to find out the direction of the crystal,” Meunier said. “But, and this is the beautiful thing, what we found is that the electron-photon interaction (which can be measured by recording the amount of light absorbed)—the interaction between the electrons and the laser—is a good predictor of the direction. Now you can really predict how the material will behave as a function of excitement with an outside stimulus.”

The research, “Anisotropic Electron-Photon and Electron-Phonon Interactions in Black Phosphorus,” was led by Meunier and Mildred Dresselhaus at Massachusetts Institute of Technology, and included researchers at Tohoku University in Japan, Oak Ridge National Laboratory, and the University of Pennsylvania, as well as Rensselaer.