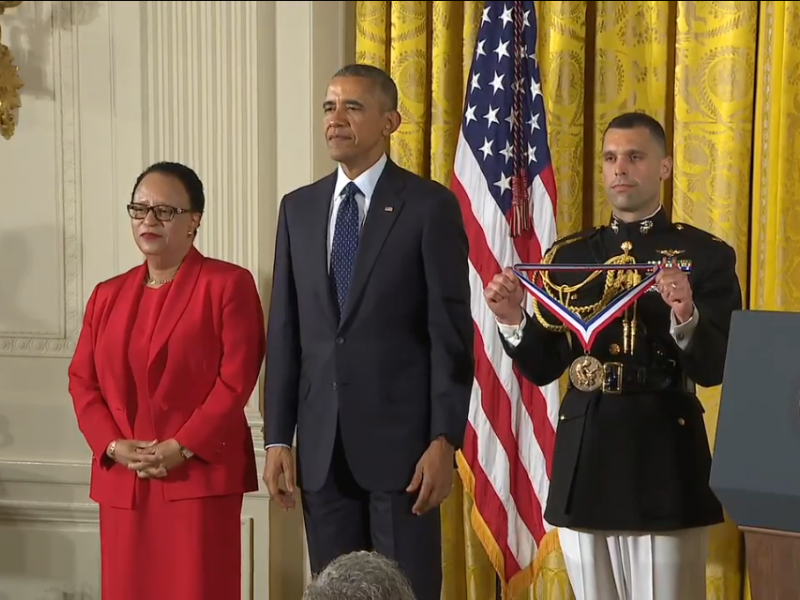 The Honorable Shirley Ann Jackson, Ph.D., President of Rensselaer Polytechnic Institute, has been presented with the 2014 National Medal of Science, the highest honor for scientific achievement bestowed by the United States government.

Award presented by President Obama at a White House ceremony

Troy, N.Y. -- The Honorable Shirley Ann Jackson, Ph.D., President of Rensselaer Polytechnic Institute, has been presented with the 2014 National Medal of Science, the highest honor for scientific achievement bestowed by the United States government. It was presented today by President Barack Obama in a White House ceremony. The award honors individuals deserving of special recognition for their outstanding cumulative contributions to knowledge in the physical, biological, mathematical, engineering, or behavioral or social sciences, in service to the nation.

“These scientific laureates exemplify the American spirit and ingenuity that have enriched our society and the global community in profound and lasting ways,” President Barack Obama said. “Their ambition and accomplishments are an inspiration to the next generation pursuing careers in the essential fields of science, technology, engineering, and math.”

The National Medal of Science was established by the 86th Congress in 1959. A committee of 12 scientists and engineers appointed by the President evaluates the nominees for the award. Since its establishment, the National Medal of Science has been awarded to 487 distinguished scientists and engineers whose careers spanned decades of research and development.

“This is a proud day for everyone at Rensselaer Polytechnic Institute,” said the Honorable Arthur J. Gajarsa ’62, Chairman of the Rensselaer Board of Trustees. “Dr. Jackson is a deserving recipient of the nation’s pre-eminent award for research and leadership in science. She has been the driving force behind establishing a new model for scientific and technological education at Rensselaer. Due to her leadership, we continue to be counted among the top universities in the world, while breaking new ground in terms of our research linked to global challenges, leading-edge pedagogical innovations, and an integrated transformative student experience.”

Dr. Jackson has served as the 18th president of Rensselaer Polytechnic Institute since her appointment in 1999. At Rensselaer, Dr. Jackson has undertaken a transformation of the university’s pedagogical approach with the implementation of The New Polytechnic, emphasizing collaboration across disciplines, sectors, and regions to address key intersecting challenges and opportunities in energy security, health, food, water, and national security, as well as the linked challenges of climate change and allocation of scarce resources so critical to our future.

In 2014, President Obama appointed Dr. Jackson as Co-Chair of the President’s Intelligence Advisory Board, which assesses issues pertaining to the quality, quantity, and adequacy of intelligence activities. In addition, she sits on the Secretary of State’s International Security Advisory Board and the Secretary of Energy Advisory Board. From 2009 to 2014, Dr. Jackson served on the President’s Council of Advisors on Science and Technology, which assists the White House in policy formulation in the many areas of science, technology, and innovation that are crucial to strengthening the economy and increasing opportunity. In 2011, she co-authored a report to the President offering an overarching strategy for revitalizing the leadership of the nation in manufacturing.