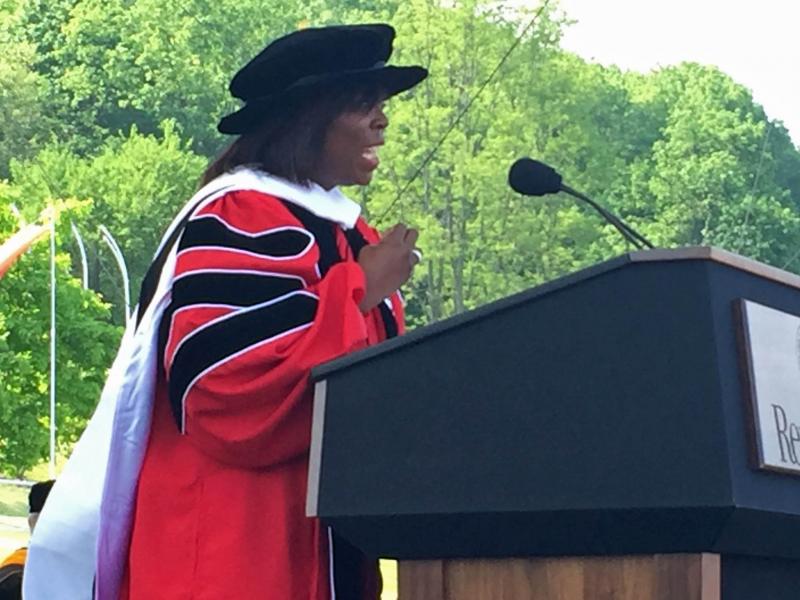 Executive Director of the United Nations World Food Programme Ertharin Cousin—leader of the world’s largest humanitarian organization—urged graduates to think first of others and be the first generation that embraces technology for all the right reasons at the 210th Commencement at Rensselaer Polytechnic Institute (RPI) Saturday.

“The only morality that technology has is what we give it—and that is where RPI and you, its graduates, come into play,” said Cousin. “Whether you have majored in engineering, the humanities, or management, the challenge I pose for all of you today is the same: How can we use the rapid advances we see in technology to improve our society, to make it more just and provide a real opportunity for peace and prosperity for everyone across the world?”

Cousin continued, “that means bringing the benefits of the information economy into service for the poorest, not just for profit. Achieving this goal will require people like you, the RPI Class of 2016, not just going off to gain riches… do that if you like but also make your ideas, talents, and skills available to organizations like mine or others helping solve problems. Overcome the challenges and address the issues for the public good.”

Cousin addressed 1,703 graduates, their families, and friends at the 210th Rensselaer Commencement today, held at the East Campus Athletic Village. During the ceremony, Rensselaer awarded a total of 1,877 degrees. They include: 140 doctoral degrees, 489 master’s degrees, and 1,248 bachelor’s degrees. Some graduates have earned more than one degree.

Rensselaer President Shirley Ann Jackson told graduates that their education has prepared them to address great global challenges, and she urged them to “dig deep in your lives and your careers.” Referring to the Commencement honorands, she said that although each has had a unique intellectual focus and career, they have worked with a unity of purpose in “empowering humanity by increasing our understanding of the universe, of our roots and commonality, and by increasing our compassion.”

“As you move forward in your brilliant careers, I encourage you to balance your sense of urgency with an understanding of the important,” said Jackson. “As you are doing your best at each stage of your professional lives, it is not important to win every argument, or to triumph in every contest, or, always, to be at the front of the line. Be slow to judge. It will make both your personal and professional lives happier. Be empathetic. Take your time, dig deep, find the truths that really matter, and unite us around them—as our honorands have done—because that is how humanity progresses and the world survives.”

Class of 2016 President Joshua Schramm reflected on how the journey to a STEM (science, technology, engineering, mathematics) education has unexpectedly led from the certainty of a set of knowledge to the uncertainty of its application in the world. Sometimes, said Schramm, “there is no correct answer.”

“On the road to global leadership, further academic achievement, innovation, creative expression, and entrepreneurship, fulfillment in our work will lead us to an answer. Not the answer, an answer,” said Schramm. “And with this answer, we can go forth confident that the challenges of today and tomorrow can be tackled, not just because of the tool-set Rensselaer has enabled us to build, but the experiences it has already allowed us to have.”

The graduates were also addressed by the 2016 honorands, David Skorton, 13th Secretary of the Smithsonian Institution, and Steven Weinberg, Nobel laureate and professor of physics and astronomy at the University of Texas.

Referencing campus programs and facilities that link STEM and the humanities—as well as the achievements of prominent Rensselaer alumni including Beatrice Hicks, Washington Roebling, and Curtis Priem—Skorton told the graduates that they are "armed with a world-class education" to tackle the challenges they face.

"Only our ability to work together, to think creatively, to 'think different,' will allow humankind to flourish," said Skorton. "As RPI graduates, you learned to do so enormously well. You are all ready to produce the innovation that our world needs."

Weinberg said his “message to graduating students, for the world’s sake as well as for your own, is that when you go forth and get things wrong, as you inevitably will, be willing to recognize that you have been wrong, and even be a little proud that as scientists or engineers you are able to know that you were wrong.”

Ertharin Cousin is the 12th Executive Director of the United Nations World Food Programme (WFP). Cousin brings more than 25 years of national and international nonprofit, government, and corporate leadership experience focusing on hunger, food, and resilience strategies. Cousin guides WFP in meeting urgent food needs while championing longer-term solutions to food insecurity and hunger. As the leader of the world’s largest humanitarian organization, she is an exceptional advocate for improving the lives of hungry people worldwide. In 2009, Cousin was confirmed as the U.S. Ambassador to the UN Agencies for Food and Agriculture in Rome. Previously, Cousin served as White House Liaison to the State Department, during which time she was appointed to the Board for International Food and Agricultural Development, and executive vice president and chief operating officer of Feeding America. A Chicago native, Cousin is a graduate of the University of Illinois at Chicago and the University of Georgia Law School. She received an Honorary Doctor of Humane Letters degree.

David Skorton is the 13th Secretary of the Smithsonian Institution. Previously, he was president of Cornell University and professor of medicine, pediatrics, and biomedical engineering. Prior to Cornell, Skorton was president of the University of Iowa and a faculty member, with research focused on cardiac imaging and image processing and clinical practice focused on adolescents and adults with congenital heart disease. He was elected to the National Academy of Medicine (formerly Institute of Medicine) and the American Academy of Arts and Sciences. Skorton is a nationally recognized advocate for the arts and humanities. He was the host of a Latin jazz radio show on Iowa Public Radio and plays the saxophone and flute. Skorton earned his undergraduate and medical degrees from Northwestern University and did his postgraduate medical training at UCLA. He received an Honorary Doctor of Humane Letters degree.

Steven Weinberg is a professor in the Physics and Astronomy Departments of the University of Texas, where he holds the Josey Regental Chair in Science. His research has been honored with the Nobel Prize in physics, the National Medal of Science, and numerous other awards, and election to the National Academy of Science, Britain’s Royal Society, and other academies in the U.S. and abroad. In addition to six scientific treatises, he has written several books for general readers, including Dreams of a Final Theory, The First Three Minutes, and To Explain the World, and two collections of published essays, many of which first appeared in The New York Review of Books. For this, he has received the Lewis Thomas Award for the Scientist as Poet and other awards. Educated at Cornell, Copenhagen, and Princeton, he taught at Columbia, Berkeley, MIT, and Harvard, where he was Higgins Professor of Physics, before coming to Texas. He received an Honorary Doctor of Science degree.