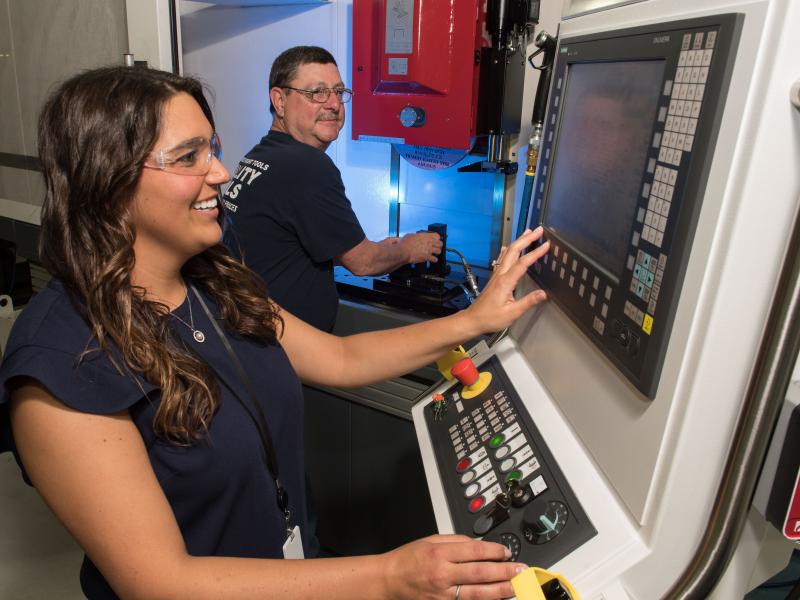 Melinda Dean works with Rick Cyr on a Blohm Grinder at Pratt & Whitney North Berwick. Dean is part of the Advanced Professional Studies program at that site.

TROY, N.Y. — The timing was just right. Pratt & Whitney had just introduced its PurePower® Engines and the company wanted to meet production demand by finding ways to manufacture the engine and other components more efficiently. Melinda Dean, a talented manufacturing engineer, was part of the specialized team at the company’s plant in North Berwick, Maine, focused on making these efficiencies. But Dean also wanted to pursue her master’s in engineering.

“I wasn’t sure how I was going to make it work—whether or not I’d need to quit my job to go back to school or whether this was something I could do while working,” said Dean, 28, who earned an undergraduate engineering degree in 2010 and then racked up four years of experience in the field. “I looked into what master’s programs were available and the majority of them were online. I really preferred to have interaction with professors and other students.”

Dean found the answer: the Advanced Professional Studies (APS), a master’s program designed by Rensselaer Polytechnic Institute for working professionals. Rensselaer, which launched APS two years ago, created this degree program, in Systems Engineering and Technology Management, specifically for Pratt & Whitney. As a result, the company, through its parent, United Technologies Corporation, pays for Dean and 12 other employees to pursue the two-year degree program.

As they continue gaining experience at one of the largest aircraft engine manufacturers in the world, they are also learning from one of the leading engineering institutions. The Rensselaer cohort works full time and also studies online, participates in web-based discussions and lectures and, every three weeks, takes a class with a Rensselaer professor who visits Pratt & Whitney.

Now the blended learning strategy has paid off, literally, for the company and the students. Dean and another APS student, T.J. Tyler, worked with a team of manufacturing and design engineers that recommended a change Pratt & Whitney says could significantly increase efficiency and cut costs.

Specifically, Dean said that through data collection and personal observation, she and colleagues saw that by changing the sequence in which several small parts are processed, far fewer are lost to distortion incurred during processing.

Cindy Szabo, the communications manager at Pratt & Whitney, said as a result of the improved efficiency, customers get their parts sooner.

“Pratt & Whitney has a culture dedicated to continuous improvement, and the work of Melinda and her team is another example of our company finding new and better ways to please our customers,” she said.

Dean said the Rensselaer education had played an important role in the discovery. In particular, she praised Professor David Rainey, a professor of practice in the Lally School of Management, who taught Lean Six Sigma I and II.

“What we’re learning in the RPI program in systems engineering and technology is to problem solve. All the methodology we are learning is helping to significantly make improvements to the process,” said Dean, whose group will graduate in 2017. “The RPI program, in combination with UTC and Pratt & Whitney, is giving us the opportunity to learn about the different tools we can use to make changes.”

“For working professionals, APS represents the best of all worlds: a nationally ranked quality education from among the country’s very best educators taught with the convenience of a blended learning format in the student’s backyard,” noted Brian Apkarian, associate director of graduate admissions at Rensselaer.

Dean, who is from Connecticut, was always drawn to math and science. She graduated from Loyola University Maryland with a degree in engineering science with a concentration in mechanical engineering.

But she knew little about her career options. After working briefly for an HVAC company, she was accepted into the Operations Leadership Program offered by United Technologies Corporation, which included eight-month rotations at several of its sites.

In the final rotation, at Pratt & Whitney, she found a dynamic manufacturing environment that challenged her daily and required continuous problem-solving skills. After completing the leadership training, Dean was hired to work there in June 2014.

The only thing missing was the master’s degree, something that might have forced her to leave the perfect job in an ideal location.

“I knew that pursing a master’s degree might help me advance in my career,” she said. “But Pratt & Whitney combining with RPI has given myself and other APS students an incredible opportunity to really make an impact by applying what we’re learning directly to our everyday roles.”