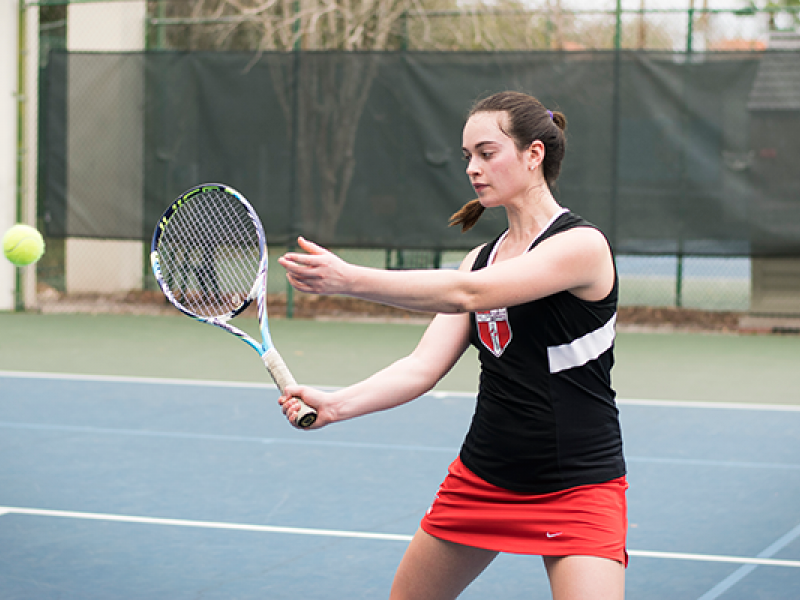 Rensselaer Polytechnic Institute (RPI) student-athlete Emily Laurilliard ’16 has been selected to receive the ITA/Arthur Ashe Leadership and Sportsmanship Award for the Northeast Region. The prestigious honor is given annually to collegiate students who have shown great achievements on and off the court. The award takes into account a player’s tennis accomplishments, scholastic achievements, and extracurricular endeavors. Sportsmanship, leadership, and character are important criteria, as is giving back to the community.

“Being a student-athlete at RPI helped me grow in all aspects of my life including athletics, academics, leadership, and service,” said Laurilliard, one of only four regional honorees and a finalist for the national award. “Tennis has shown me that if you are passionate about what you do and continue to work hard at it despite winning or losing, you will be successful.”

“This is one of the most prestigious awards the ITA has, in my opinion, because it takes every type of success into account,” said Rensselaer head coach Caitlin Crowley. “Emily has proven she is a strong leader both on the court and in the community, a motivated student and athlete, and someone who represents her school, team, and herself in the most honorable of ways.”

The team’s captain, Laurilliard was named All-Liberty League in both doubles and singles this season. She and partner Melanie Frank were First Team after going 10-9 overall and 6-7 in dual matches at No. 1. In singles, Laurilliard played either No. 1 (1-7) or No. 2 (4-3) for the Engineers, who were 6-10 overall and 3-4 in the conference. She was 5-14 overall with a 3-3 league mark, including victories in each of her last three matches.

A four-year performer, she posted 31 singles victories at No. 1, 2, 3, or 4 and 38 doubles wins at either No. 1 or 2 throughout her tenure. She was All-League three times and chosen for weekly Liberty League honors on four occasions.

Laurilliard, a biomedical engineering major with a concentration in biomaterials, was on the Dean’s List every semster on her way to earning multiple Liberty League All-Academic and ITA Scholar Athlete awards. She conducted research while on campus as well as during separate internships with Regeneron Pharmaceuticals Inc. At Rensselaer, she was an undergraduate research assistant who worked on developing a synthetic anterior cruciate ligament (ACL). She also assisted in the effort to discover new methods to sort differentiated adult stem cells. At Regeneron, Laurilliard worked on drug product engineering and medical device implementation.

For two years, she served as a resident assistant and was also involved with the Student-Athlete Advisory Committee (SAAC). She is a member of the biomedical engineering honor society as well as Phalanx, a Rensselaer honor society.

“Emily’s service to the campus and community will be the legacy she leaves with RPI,” said Crowley.