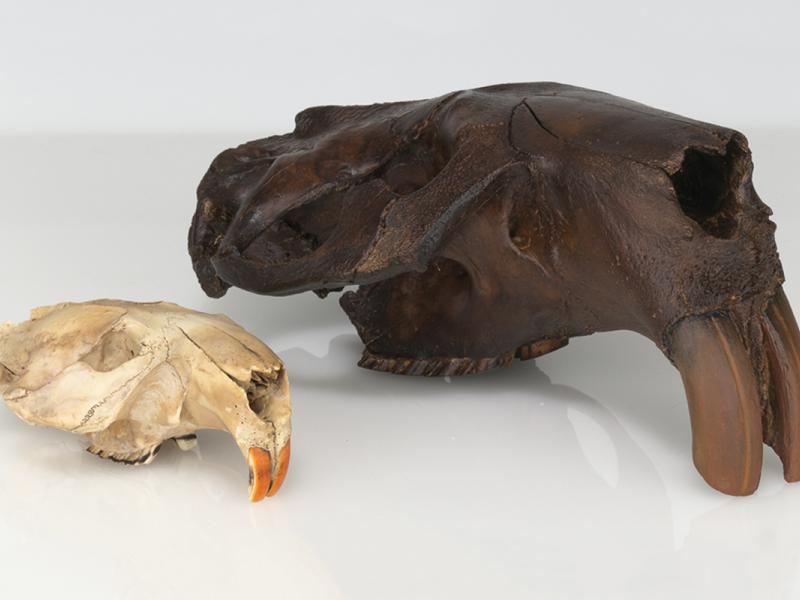 A few snippets of protein extracted from the fossil of an extinct species of giant beaver are opening a new door in paleoproteomics, the study of ancient proteins. Ancient proteins can be used to place animals on the evolutionary tree, and could offer insights into how life and Earth’s environment have evolved over time. Typically, paleoproteomics relies on fossils collected for the purpose. But in a paper published today in the Proceedings of the Royal Society B, researchers at Rensselaer Polytechnic Institute (RPI) used a fossil collected more than 170 years ago in central New York, and housed at the New York State Museum.

“Paleoproteomics is a young field. We don’t yet know the full potential of the information it may offer us, and one barrier to that is the supply of fossils we can call upon for research,” said Deepak Vashishth, professor of biomedical engineering and director of the Rensselaer Center for Biotechnology and Interdisciplinary Studies. “In developing these techniques, we’re creating new value in fossils that are already on exhibit, or sitting in storage waiting for a purpose.”

The team of researchers extracted proteins from the first skull of the species Castoroides ohioensis ever found.  Collected in 1845, the giant beaver skull is the oldest museum-curated bony specimen to have been studied using paleoproteomic tools. The researchers were searching for proteins, chains of amino acids assembled from instructions encoded in DNA that perform a wide variety of functions in living organisms. Using mass spectrometry analysis, researchers detected many samples of collagen 1, the most common protein in bone.

“This research not only provides exciting information about a New York State Museum specimen of unique significance—the first discovered and documented giant beaver skull in the world—it also highlights the critical role museum collections play in research and discovery,” said Robert Feranec, New York State Museum curator of vertebrate paleontology. “Without maintaining collections rich in diversity of specimens, both ancient and modern, similar research that examines these windows into our past would not be possible.”

The big challenge to drawing upon existing fossil collections is that they weren’t collected for the purpose of paleoproteomics, and they may not have been stored in conditions optimal to protein extraction and analysis techniques, said Timothy Cleland, a postdoctoral researcher formerly at Rensselaer Polytechnic Institute and now at the University of Texas-Austin.

“In paleoproteomics we’ve generally looked at specimens collected recently and carefully stored in climate-controlled conditions. In this case, we’re looking at a specimen that sat on a shelf collecting dust for most of its life,” Cleland said. “So we wanted to know – can we look at these historically collected specimens and pull out protein information?”

When researchers studied the giant beaver skull, the first thing they noticed was that it appeared to have varnish, a common treatment used to preserve fossils, applied to the outside of it. To avoid the varnish (which is itself organically based), they took samples from the nasal cavities of the skull. They removed a small sample of bone, extracted the preserved proteins, digested with enzyme, and analyzed the protein pieces with mass spectrometry.

The analysis determined the primary sequence of amino acids in the protein detected, as well as post-translational modifications, chemical changes on the surface of the protein that are not defined by DNA. Both the primary sequence and post-translational modifications have value to researchers, and that value will increase as more specimens are analyzed and more information becomes available, said Cleland.

A database of primary protein sequences, for example, could be useful in clarifying evolutionary trees, in reverse engineering proteins to understand how particular proteins evolved over a period of time, or in “reviving” a sequence that may be nonexistent now for therapeutic use.

“Collagen, for example, is a really long-lived protein – we retain some of the collagen we’re born with for our entire lives. By studying the post-translational modifications to collagen, we can learn what an organism is doing to its collagen so it can function better – for example become more rigid or more flexible,” said Cleland. “Now imagine if we were able to build up a database of post-translational modification to ancient organisms, we could begin to make inferences about evolutionary changes, or use them in protein engineering to look at how function in the ancient protein compares to that same protein in living animals.”

At Rensselaer, the research exemplifies the work being done at The New Polytechnic, addressing difficult and complex global challenges, the need for interdisciplinary and true collaboration, and the use of the latest tools and technologies, many of which are developed at Rensselaer.