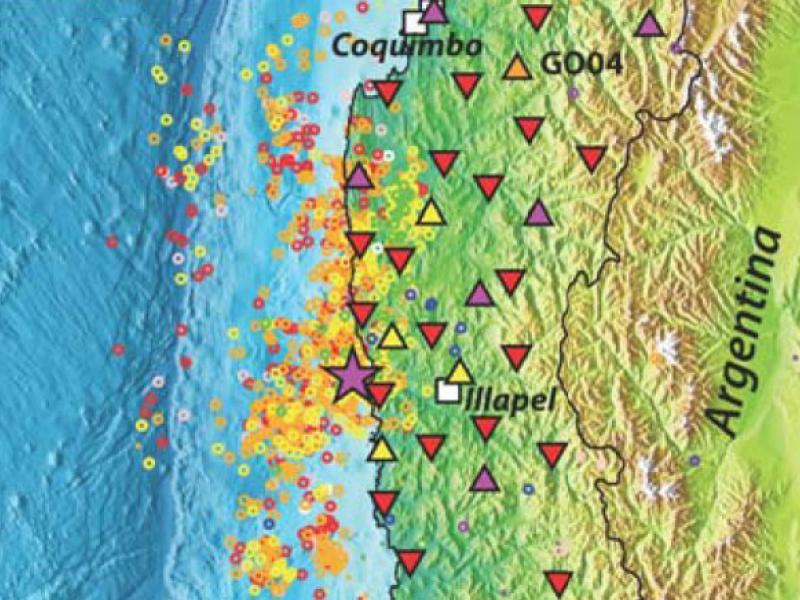 A network of broadband seismometers (indicated by triangles) is tracking seismic activity (indicated by circles) in the area of Illapel, Chile

Later this year, seismology geophysicist Steve Roecker will travel to Illapel, Chile, to remove instruments which have been tracking the struggle between two tectonic plates that caused a magnitude 8.3 earthquake on September 16, 2015. While areas to the north and south of Illapel – where the Nazca plate dives beneath the South American plate – have been studied, until now the complexity of the boundary in the area of Illapel has deterred research.

“Researchers have studiously avoided this part of the boundary because the Nazca plate changes dip – curving from 45 degrees in one area to about 10 degrees in another – which makes it hard to interpret results,” said Roecker, a professor of earth and environmental sciences in the School of Science at Rensselaer Polytechnic Institute. “But with the 2015 earthquake we knew we had an opportunity to collect a really good dataset that we can use to learn more about the dynamics in this environment.”

Researchers will use the open-source data to determine how much energy the 8.3 magnitude earthquake released, where it was released, and how much may yet remain to be released. Using tomography techniques, researchers can also create images of the subsurface which, when analyzed, may reveal subsurface temperatures or geologic composition. This information will help predict where future earthquakes may strike, and what their strength may be.

Like many other areas in the Pacific Ocean “Ring of Fire,” Illapel is a subduction zone, an area where one plate pushes beneath another, producing some of the world’s biggest and most destructive earthquakes. Subduction of the Nazca plate has generated high magnitude megathrust earthquakes more frequently than any other subduction zone in the past 100 years, including the largest magnitude earthquake yet recorded – a magnitude 9.5 earthquake in 1960 near Valdivia, Chile.

“These are where you have the megathrusts; if you look at the top 10 earthquakes for energy release and damage, they’re all along these types of boundaries,” Roecker said. “And that’s why it’s important to study them.”

Roecker’s research exemplifies the work being done at The New Polytechnic, addressing difficult and complex global challenges, the need for interdisciplinary and true collaboration, and the use of the latest tools and technologies, many of which are developed at Rensselaer.

To study the area around Illapel, Roecker and his team installed a network of broadband seismometers in November 2015 knowing that, after the magnitude 8.3 earthquake, aftershocks generating good data would be abundant. Between the 20 temporary seismometers researchers installed, and 10 additional existing seismometers, the network is able to collect data on a stretch of land about 150 kilometers from north to south, and 50 kilometers from the coast inland.

Roecker said the team expects the data will allow researchers to map out the release of strain on the boundary, which provides insights into where active faults may lie in the upper plate close to the surface, and how large they are. Researchers will also be able to describe the deformation of the top plate as a result of the subduction of the bottom plate, which can help establish what portions of the boundary have not yet ruptured and must eventually do so. And researchers will process the data using tomographic techniques to identify the location of magma and the types of rock that lie beneath the surface.

“A good analogy, and one that shares origins with this technique, is a CAT scan. Using a source of energy (in a CAT scan it’s an x-ray), you collect data from a variety of different angles, and based on the changes of exposure you can re-create the distribution of whatever’s attenuating the x-ray,” Roecker said. “In this case, we use earthquakes as the source of energy, and we derive our angles by placing receivers in multiple locations at the surface of the Earth.”

Roecker was part of a team of researchers who used a similar approach in 2010 after a magnitude 8.8 earthquake centered on Maule, Chile, just south of Illapel. Data collected from that deployment, known as the International Maule Aftershock Deployment (IMAD), has been used by a large number of scientists from a broad range of disciplines. Researchers expect that the Illapel data along with the IMAD data will provide the first “modern-instrumentation observation of along-strike rupture terminations of two clearly temporally related and spatially adjacent megathrust earthquake rupture zones.”

“There are quite a few questions we want to answer, and the more you know, the more you can do to protect people,” Roecker said.

The research is supported with a $275,000 grant from the National Science Foundation, and is a collaboration between Rensselaer, the University of Florida, and groups at the Universidad de Chile.