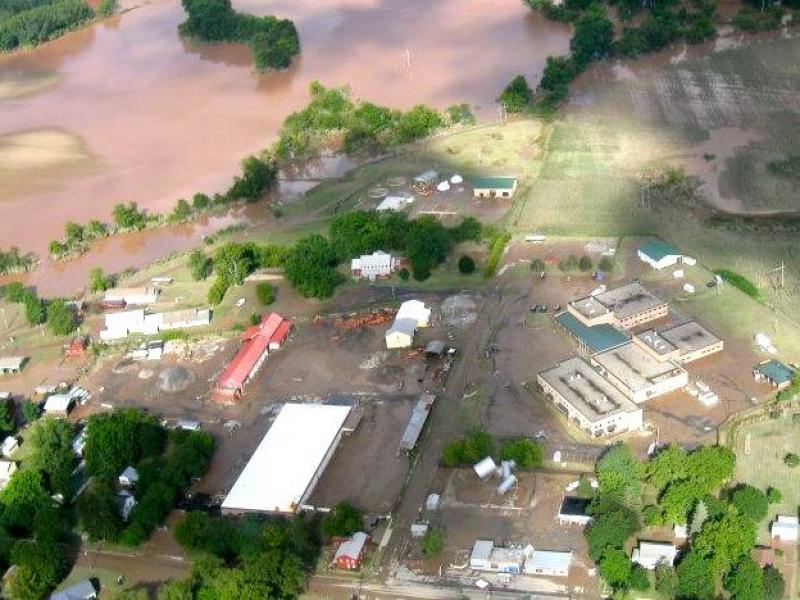 In late summer 2011, Hurricane Irene and Tropical Storm Lee left extensive damage in the Capital Region, especially along creeks and riverbeds. This is an aerial image of North Main Street in Schoharie, the day after Hurricane Irene. This photo also pictures the home of Lillian Spina-Caza, lecturer in the Department of Communication and Media at Rensselaer Polytechnic Institute, who is a Schoharie resident. Now, with assistance from a $90,000 grant from the New York State Council of the Arts, Spina-Caza and Schoharie Area Long Term Inc., (SALT) are working to develop the “Geo to Go” interactive website and augmented reality (AR) arts, cultural, and heritage trails project.

Troy, N.Y. — In late summer 2011, Hurricane Irene and Tropical Storm Lee left extensive damage in the Capital Region, especially along creeks and riverbeds. In the aftermath, several communities, including the Village of Schoharie, worked to pick up the pieces, while dealing with the impact of extreme flooding, rainfall, and power outages. The impact was very personal for Lillian Spina-Caza, lecturer in the Department of Communication and Media at Rensselaer Polytechnic Institute, who is a Schoharie resident. Today, with assistance from a $90,000 grant from the New York State Council of the Arts, Spina-Caza and Schoharie Area Long Term Inc., (SALT) are working to develop the “Geo to Go” interactive website and augmented reality (AR) arts, cultural, and heritage trails project.

“The research problems that I am concerned with are how new communication technology – including social media and augmented reality apps – can be used to speed recovery in post-disaster events and, later, to revitalize the culture and economy of communities devastated by such tremendous events,” said Spina-Caza. “The SALT ‘Geo to Go’ website and AR trails project are inspired by this research.”

In 2011, localities along the Schoharie Creek, the Poestenkill, Mohawk and Hudson rivers, and other waterways suffered damage to both infrastructure and personal property. In the weeks following the storms, many of the communities continued to be vulnerable, not only to weather impacts on the already saturated landscape, but also to public health concerns brought on by mold, mildew, and bacteria growing across the flood-ravaged areas.

In the fall of 2013, Spina-Caza coordinated with SALT, the New York Folklore Society, and members of RPI Relief on a story collection project to record oral narratives from flood survivors and recovery volunteers. RPI Relief is a program of the Dean of Students Office at Rensselaer that is focused on raising awareness and funds, as well as coordinating volunteer initiatives when disasters strike an area. Many Rensselaer students volunteered to assist in the recovery process after the flooding caused by Irene and Lee in 2011. In addition to the story collection project, Spina-Caza and SALT staff and VISTA volunteers also collected survey data about volunteerism in the aftermath of flooding. The stories and data gathered for the storytelling project are part of a larger-scale research and design project that Spina-Caza is working on.

From May to July, Spina-Caza traveled the county with a production team from Working Pictures Inc., collecting videotape footage of the trails. To date, she has produced more than 40 videotape interviews for the premiere trails, and is in the process of editing the footage. These interviews will be accessible on the interactive website and also on trails throughout the county via GIS technology and the mobile app. As tourists and residents travel the physical trails, they will also learn more about arts, culture, and historical treasures in Schoharie County on their mobile devices.

The ability to use AR to overlay virtual information or images on the physical world will allow travelers to see, for example, how a community appeared pre-flood, and to help communities reclaim their heritage by preserving memories of things lost.

“The field of communication and media has been changed forever by new communication technology and there are many opportunities for research that can examine the roles these technologies might have in assisting people suffering in the aftermath of human or natural disasters on both a national and global scale,” Spina-Caza said. “This project creates an opportunity to envision and shape how new media can change the way we can positively respond to such events to speed recovery and, further, to use technology for community revitalization post-disaster or crisis.”

Augmented reality is not limited to just images and sound; other sensory improvements are also possible. The development of the “Geo to Go” website AR app comes at a time when museums and other institutions are exploring digital and mobile technologies to enhance the visitor experience. In addition, the use of augmented reality is on the rise in the world of tourism, education, and gaming.

The research conducted by Spina-Caza exemplifies The New Polytechnic, a paradigm for teaching, learning, and research at Rensselaer, the foundation of which is the recognition that global challenges and opportunities are so great that they cannot be addressed by the most talented person working alone. The New Polytechnic serves as a great crossroads for collaboration—working with partners across disciplines, sectors, and geographic regions—to address complex global challenges, using the most advanced tools and technologies, many of which are developed at Rensselaer.

“Professor Spina-Caza’s application of augmented reality to cultural and natural history is a truly unique way to preserve the societal impact of this natural disaster,” said Dean Mary Simoni. “Her collaboration with state and community agencies establishes a strategic inter-institutional alliance aimed at not only preserving our past and making it available to a wider audience, but as a way to advance disaster preparedness.”

Spina-Caza noted that the SALT Revitalization Project – website and augmented reality trails – further provides an opportunity for interdisciplinary collaboration with faculty across departments at Rensselaer. As the project developer, Spina-Caza is building a team, including SALT and the New York Folklore Society, along with Rensselaer faculty that can accomplish the large-scale project. For example, she has been consulting with Rensselaer faculty colleagues from the Arts Department, including Silvia Ruzanka, a lecturer and multimedia artist whose projects include video installation, performance, and virtual environments; and Kathleen Ruiz, an associate professor and multimedia artist who creates simulations, games, installations, sculpture, and photography.

Spina-Caza has collaborated on several grants with SALT staff, including the REDC Arts, Cultural & Heritage Initiative Grant from the New York Council on the Arts (NYSCA) for the website and AR app design. To further support the next two phases of the project, she is also working on other grants and funding initiatives with the SALT team. Spina-Caza noted that she has volunteered as a grant writer with SALT since 2013 as a way of “giving back” to the organization that helped her recover her home after Hurricane Irene hit in 2011.

The SALT project also provides opportunities for students to participate in a real-world research and design project. During the Spring 2016 semester, Tiffany Licata, a junior majoring in electronic media, arts, and communication (EMAC) who hails from Long Island, New York, started working on a research paper in collaboration with Spina-Caza on the use of augmented reality technology to promote arts, culture, and heritage in communities impacted by disaster events for the purpose of community revitalization and economic development. Licata, a student in Spina-Caza’s Introduction to Communication Theory class in the fall of 2015, expressed her interest in gaining more research experience. Licata was also personally impacted by flooding caused by a natural disaster, when her family was displaced for six months following Hurricane Sandy in 2012, until their home could be recovered.

Licata presented the research she conducted for an extended literature review at Rensselaer’s Seventh Annual Undergraduate Research Symposium, which was held on May 4, 2016. Her work with Spina-Caza explores “Augmented Reality for Post-Disaster Community Revitalization.”

Students in Spina-Caza’s Media Communication Research class this past spring also took advantage of a service-learning opportunity to work with SALT as a client, and to write research papers on how the website and AR project can be designed using best practices. As this is a multiple-phase project, Spina-Caza hopes to continue to provide service-learning opportunities to students over the next several years.

“The research and design projects I am currently working on reflect Rensselaer’s strategy to ‘spur regional and national economic development’ through technology innovation,” Spina-Caza added. “The project that I am working on with SALT supports resilience, hope, and constructive change to revitalize communities still recovering physically and economically from natural disasters. We hope the website and AR app will be a model for this type of research and development, and that other communities will be able to recreate it and use it for similar purposes.”

Spina-Caza received her master’s degree in television and film from Syracuse University, and her Ph.D. in communication and rhetoric from Rensselaer. Over the years, she has focused her research on media literacy and communication practices, and is particularly interested in the interplay of physical and virtual activity, and how virtual technology can both enhance and be enhanced by our interactions with the physical world. She believes augmented reality will get people back out into the world, immersing them in lively art, history, and cultural experiences that can help them understand the world in new ways.

Rensselaer Polytechnic Institute, founded in 1824, is the nation’s oldest technological research university. The university offers bachelor’s, master’s, and doctoral degrees in engineering; the sciences; information technology and web sciences; architecture; management; and the arts, humanities, and social sciences. Institute programs serve undergraduates, graduate students, and working professionals around the world. Rensselaer faculty are known for pre-eminence in research conducted in a wide range of fields, with particular emphasis in biotechnology, nanotechnology, computational science and engineering, data science, and the media arts and technology. The Institute is well known for its success in the transfer of technology from the laboratory to the marketplace so that new discoveries and inventions benefit human life, protect the environment, and strengthen economic development. For more information, please visit http://www.rpi.edu.