One Hundred Years in the Making: A Space That Pays Homage to African-American History and Culture 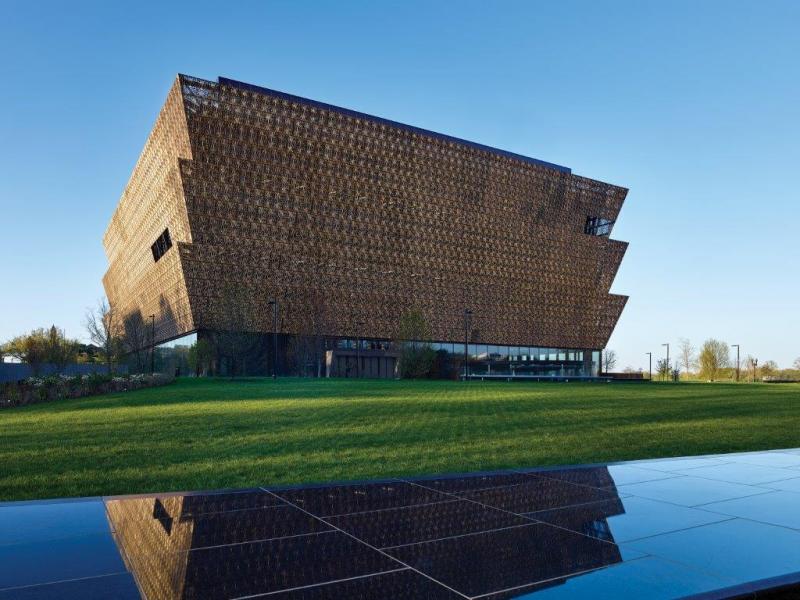 One Hundred Years in the Making: A Space That Pays Homage to African-American History and Culture

Troy, N.Y. — More than a century after black Civil War veterans began imagining a monument to honor the civic contributions of African-Americans, the Smithsonian National Museum of African American History and Culture (NMAAHC), the only national museum devoted exclusively to the documentation of African-American life, history, and culture, will officially open its doors. Rensselaer Polytechnic Institute President Shirley Ann Jackson is one of several notable guests who will speak during the Sept. 24 grand opening dedication ceremony for the museum.

NMAAHC was established by an act of Congress in 2003, establishing it as part of the Smithsonian Institution, following decades of efforts to promote and highlight the contributions of African-Americans.

The outdoor ceremony begins with a “gathering and musical prelude” at 9:30 a.m. The dedication of the newest museum is set for 10:30 a.m. The ceremony will be live-streamed on the Internet at nmaahc.si.edu.

President Barack Obama and first lady Michelle Obama, along with former President George W. Bush and former first lady Laura Bush, will join members of Congress, the Supreme Court, and visitors from across the country on the National Mall during the ceremony. Congressman John Lewis (D-Ga.), a veteran of the civil rights struggle of the 1960s, who received an honorary Doctor of Laws degree during Rensselaer’s 207th Commencement Ceremony, and Supreme Court Chief Justice John G. Roberts Jr., chancellor of the Smithsonian, are expected to attend the dedication.

“Today, the Smithsonian Institution launches a museum where the history, culture, and the heroism of African Americans are recognized fully, as constituting a great tributary feeding the larger stream of our national story,” said President Jackson, who also serves as vice chair for the Smithsonian Board of Regents. “I grew up in Washington, DC, not from a wealthy background, in a segregated environment, but it was my great fortune, as a young girl, to have the Smithsonian as an extension of my classrooms. It is so meaningful for me, and for millions like me, to see the achievements of African Americans now being given a place of honor here on the National Mall.”

The museum’s 12 inaugural exhibitions will focus on broad themes of history (slavery and freedom, segregation, and 1968 and beyond), culture and community (power of place, sports, military history, and an exhibit titled “Making a Way Out of No Way”), music, cultural expressions, and visual arts. To date, the museum has collected more than 36,000 artifacts.

The Smithsonian Board of Regents, the governing body of the Institution, voted in January 2006 to build the museum on a five-acre site on Constitution Avenue between 14th and 15th streets N.W. The site is between the Washington Monument and the Smithsonian’s National Museum of American History. When the NMAAHC opens, it will be the 19th and newest museum of the Smithsonian Institution.

The site of the National Museum of African American History and Culture is intentional in both its placement and architectural design, according to museum officials. The location of the building on the National Mall and the framed perspective visible from inside the building present a view of America through the lens of African American history and culture. The NMAAHC building design reflects a deep connection to African heritage, with design elements that embody the spirit of African-American history and culture.

For example according to a NMAAMC Tumblr post, the corona, or the crown, silhouette derived from the building’s inverted and stacked trapezoidal shape continues to highlight the museum’s connection to the African Diaspora; while the oculus, located in the museum’s Contemplative Court space, offers visitors an opportunity for quiet reflection. In addition, the Filigree, the bronze-colored latticework that wraps the exterior of the building, pays homage to the intricate ironwork of African-American metalworkers in South Carolina and Louisiana.

The opening will be the focus of a week-long celebration that begins with a dedication ceremony. The celebration continues with extended visiting hours and a three-day festival showcasing popular music, literature, dance, and film. Also planned are events co-hosted by other museums around the country and in Africa. Museum officials said they expect about 20,000 people to attend the opening and related events.

“The opening of the National Museum of African American History and Culture and the future of natural history museums in the 21st century are subjects of great relevance to Rensselaer faculty and students, given our leadership in technologies with the potential to transform the museum experience, including cognitive and immersive systems, and data science and visualization,” President Jackson noted.

Last month, Rensselaer hosted Dr. Kirk Johnson, the Sant Director of the world-renowned Smithsonian National Museum of Natural History, whose noted career as a paleontologist has seen him lead expeditions in 11 countries and 19 states, resulting in the discovery of more than 1,400 fossil sites. Johnson was invited by President Jackson to speak to members of the campus and local community. He delivered a lecture titled “Natural Museums in the 21st Century,” in the Curtis R. Priem Experimental Media and Performing Arts Center Concert Hall.

During her tenure at Rensselaer, President Jackson has worked to redefine Rensselaer within The New Polytechnic, an emerging paradigm for teaching, learning, and research at the Institute. The foundation for this vision is the recognition that global challenges and opportunities are so great they cannot be adequately addressed by even the most talented person working alone. Rensselaer serves as a crossroads for collaboration—working with partners across disciplines, sectors, and geographic regions—to address complex global challenges, using the most advanced tools and technologies, many of which are developed at Rensselaer. Research at Rensselaer addresses some of the world’s most pressing technological challenges—from energy security and sustainable development to biotechnology and human health. The New Polytechnic is transformative in the global impact of research, in its innovative pedagogy, and in the lives of students at Rensselaer.

“We do a very great thing today for the millions of children—from all over the nation—and around the globe—who will come to the National Museum of African American History & Culture and be moved and astonished, and emerge with an elevated sense of their own heritage, prospects, and potential,” President Jackson said.

On September 24, join the social media discussion and journey through the lens of the African-American experience during the opening of the Smithsonian National Museum of African-American History & Culture (NMAAHC), follow @NMAACH and @RPInews using the hashtag #APeoplesJourney