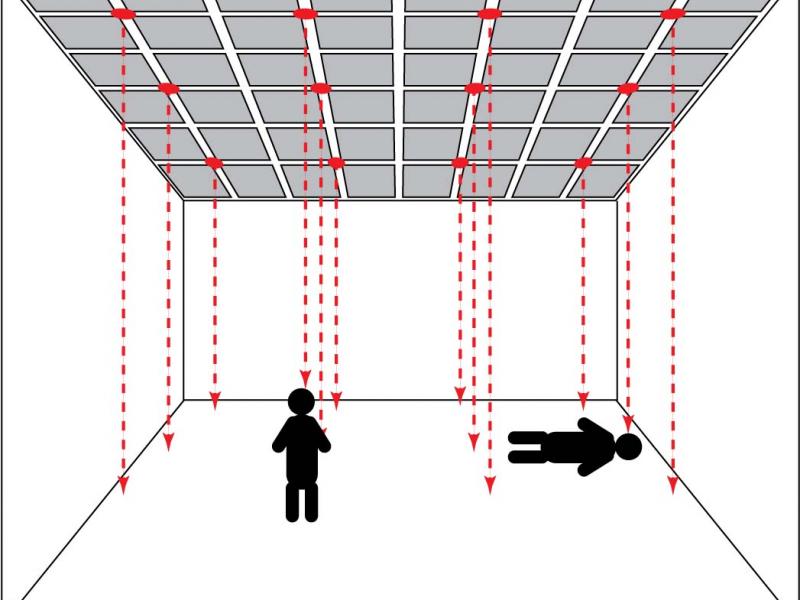 In this rendering, Future smart ceiling panels, each mounted with a single-pixel depth sensor. The red spots represent the position where the ToF depth sensors are mounted, and the dashed lines indicate ToF signals. Image courtesy of Richard Radke

Space travel is heating up—and so are rocket fuel emissions. These companies are developing cleaner alternatives to protect earth first
Why Do Fossil Fuels Have So Much Carbon Stored in Them?
Rensselaer Creates Course Program Focused on Training in Micro and Nanofabrication Cleanroom Technology
Rensselaer Researcher Awarded NASA Space Biology Grant for Work Focused on Spaceflight Stressors
Moveable Robotic Platform Could Be the Future of Retail
October 19, 2016

Troy, N.Y. — A team of faculty and graduate students from the Rensselaer Polytechnic Institute Center for Lighting Enabled Systems & Applications (LESA) and Boston University was awarded a U.S. patent titled “Sensory Lighting System and Method for Characterizing an Illumination Space.” The patent describes how the LED lighting system in a space can detect occupants’ presence, location, and pose without the use of cameras, thereby preserving the privacy of the room’s occupants.

“Every illuminated space has an optical ‘fingerprint,’” said LESA Director Robert Karlicek, an inventor on the patent who also serves as a professor in the Department of Electrical, Computer, and Systems Engineering in the School of Engineering. “If nothing is moving within the space, then the distributions of light and color in the space don’t move.  Using a limited number of low-cost sensors mounted on the ceiling, we can measure the optical fingerprint of any space and determine when and how things move within it.”

LESA, along with Boston University Professor of Electrical and Computer Engineering Thomas Little, who also serves as associate director of the National Science Foundation (NSF) Smart Lighting ERC, and his graduate students developed the patented approach to privacy-preserving occupancy sensing uses technology called time-of-flight (ToF) sensing. ToF sensors—using light—return a reasonably accurate physical distance measurement, allowing one to map the space and determine the location as well as height (sitting, standing, prone) of individuals and other objects in the room.

“Imagine a building management system in an environment such as a health-care facility, office or retail space, warehouse, airport, or library that always knows where occupants are located, as well as the kind of activity occurring, using information generated by the lighting system,” Karlicek said. “This kind of data is needed to maximize building energy efficiency, improve security operations, and automatically create more comfortable environments for occupants. The patented technology developed at LESA promises to be more cost effective and accurate than many competing technologies.”

Karlicek noted that the privacy-preserving feature of the technology makes it attractive for use in almost any setting, since cameras are not used and individuals cannot be recognized. Perhaps most importantly, since most buildings already have lighting installed, the technology can piggyback on existing infrastructure, once an LED lighting system is in place.

“Time-of-flight sensing is very appealing for occupancy sensing in smart environments and Internet-of-things applications, since it’s fairly robust to the ambient light in the room and the clothing of the participants, and the sensors are becoming very inexpensive.  We’re excited about integrating time-of-flight into more advanced cognitive environments that can understand and react to the activities of their occupants,” said computer vision expert Richard Radke, who serves as LESA Deputy Director. Radke is also a professor in the Department of Electrical, Computer, and Systems Engineering at Rensselaer.

To further develop and demonstrate the new technology, LESA has created two prototype test beds, the “Smart Conference Room” operated at Rensselaer, and the “Smart Hospital Room,” located at the University of New Mexico.  The test beds are dedicated to taking LED lighting to new levels of cost-effective data generation and control using only the properties of the light itself.

Funded primarily by the National Science Foundation (NSF), the LESA ERC is an interdisciplinary, multi-university center developing “Smart Lighting Systems that See and ThinkTM”.  The center engages faculty members, graduate students, research staff, and undergraduates to work on research leading to smart lighting systems with adaptive and controllable properties that will change the way society uses lighting. The center joins academia, industry, and government in partnership to produce transformational engineered systems, along with engineering graduates who are adept at innovation and primed for leadership in the global economy. The LESA ERC is headquartered at Rensselaer Polytechnic Institute in Troy, NY, and partners with Boston University, The University of New Mexico, and Thomas Jefferson University to achieve its objectives.  http://lesa.rpi.edu