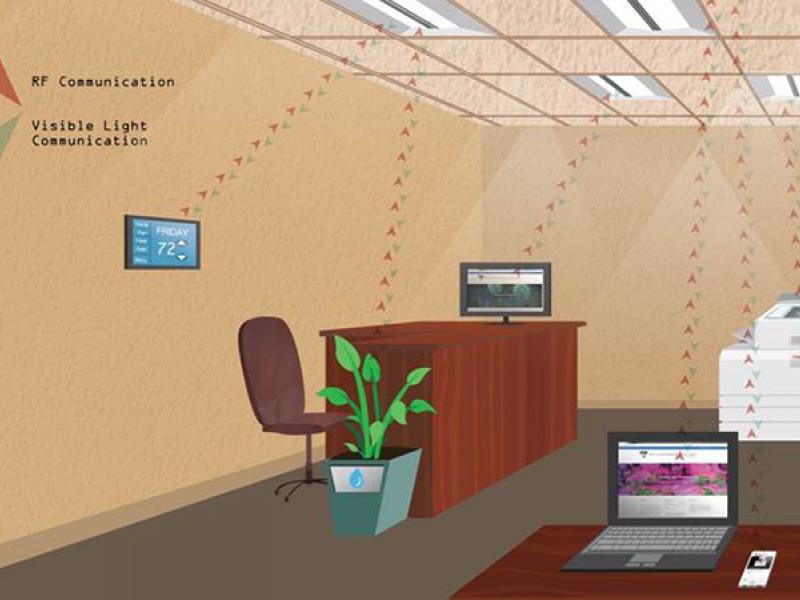 What Are eVTOLs? Are They the Future of Aviation?
Here’s how Fed rate hikes are hurting tech firms
Protect the Future: How to Stop AI from Overpowering Humanity
Rensselaer Researcher Mohammed Zaki Is an AAAS Fellow
RPI To Host 24th Annual Black Families Technology Awareness Day on February 4
November 3, 2016

The term Li-Fi, short for “light fidelity,” describes the emerging use of VLC for wireless data access. Li-Fi shares the same delivery concept as Wi-Fi except that data is wirelessly transmitted via electromagnetic waves in the visible instead of the invisible RF electromagnetic range. LEDs transmit data through modulation. The modulation is so fast and subtle that it is imperceptible to the human eye and does not interfere with the quality of illumination.

Still, there are many hurdles to overcome before Li-Fi becomes ubiquitous. One challenge is the ability to sustain continuous connectivity as a smartphone, laptop, or other electronic device is moved about in a space.

In the cellular communications world, this technique is called handover—the process of linking phone calls or data wirelessly from one point to another. This allows us to maintain a phone call as we are traveling between cell towers.

Mona Hella, associate professor in the Department of Electrical, Computer, and Systems Engineering in the School of Engineering at Rensselaer, is leading the sensors thrust in LESA to investigate new types of light sensors and signal processing circuits that could make VLC linking capability a reality.

Hella’s research team, that includes Bassem Fahs, a LESA research associate, is creating arrays of photodetectors that can serve as multichannel receivers and light sensors to allow the tracking of light, from one LED fixture to the next. She is also working to increase the bandwidth of the standard silicon-based photodiode to receive the high-speed data streams wirelessly from the solid-state light sources.

“Conventional photodiodes are photodetectors that convert light into current,” said Hella. “They are inexpensive to manufacture and are used in a multitude of applications in everything from cameras, smoke detectors, and CAT scanners, to barcode scanners and some airport security inspection equipment.”

Hella noted that in a VLC system, photodiodes integrated into optical receivers capture the incident light (the light directly aimed at a subject) needed for electric current generation. One drawback is that these photodiodes also collect unwanted ambient light, the reflected light that bounces off the walls, for instance. In research terminology, this is called “noise.”

Hella is tackling a two-pronged problem: The surface areas of the photodiode need to be enlarged to capture more incident light, but without collecting unwanted noise and dramatically affecting the capacitance of the photodetector that limits the speed of the communication channel.

Hella says Li-Fi and other emerging VLC technologies are important elements in making smart lighting an inherent part of the Internet of Things (IoT), a wireless infrastructure that connects devices and whole systems, ranging from our phones and kitchen appliances to roads, vehicles, and the electric grid, to obtain and share data like never before. By using Li-Fi to help bear the data load, higher bandwidth wireless communications are maintained as more IoT objects compete for RF bandwidth.

“The technology cannot be disruptive unless it is integrated with standard microchip technology,” Hella said. “It’s this basic idea of using these different lighting technologies that will be an integral part of the smart world around us.”

According to LESA researchers, VLC has the potential to add significant value to existing lighting infrastructure, enabling cost-effective, high-bandwidth, wireless, lighting-enabled communications. As soon as LEDs replace conventional lighting, VLC can be employed in a wide variety of industrial, commercial, and residential applications.

“At LESA, we want to build smart lighting systems that automatically adjust the right lighting for us at any given time, with light coming from the right direction, with the right color and intensity, optimized for human health and productivity,” said LESA Director Robert Karlicek, who also serves as a professor in the Department of Electrical, Computer, and Systems Engineering. ”At the same time, we want to develop smart lighting systems that will provide information to us, directly through the light, which will be faster than the radio frequencies we now use.”

LESA (formerly known as the Smart Lighting Engineering Research Center, or ERC), established in 2008 with a $35 million grant from the National Science Foundation (NSF), is one of 19 currently supported ERCs in the United States. The purpose of the ERCs is to develop interdisciplinary research and education programs, in partnership with industry, aimed at accelerating the commercialization of university research. The goal is to advance technology and innovation to address significant societal problems and enhance the foundation for economic competitiveness.

To learn more about LESA, read the article titled “A Smart Lighting Revolution,” that appeared in the Fall 2015 Rensselaer alumni magazine: http://bit.ly/2eKRowx

Funded primarily by the National Science Foundation (NSF), the LESA ERC is an interdisciplinary, multi-university center developing “Smart Lighting Systems that See and ThinkTM”.  The center engages faculty members, graduate students, research staff, and undergraduates to work on research leading to smart lighting systems with adaptive and controllable properties that will change the way society uses lighting. The center joins academia, industry, and government in partnership to produce transformational engineered systems, along with engineering graduates who are adept at innovation and primed for leadership in the global economy. The LESA ERC is headquartered at Rensselaer Polytechnic Institute in Troy, NY, and partners with Boston University, The University of New Mexico, and Thomas Jefferson University to achieve its objectives.  http://lesa.rpi.edu