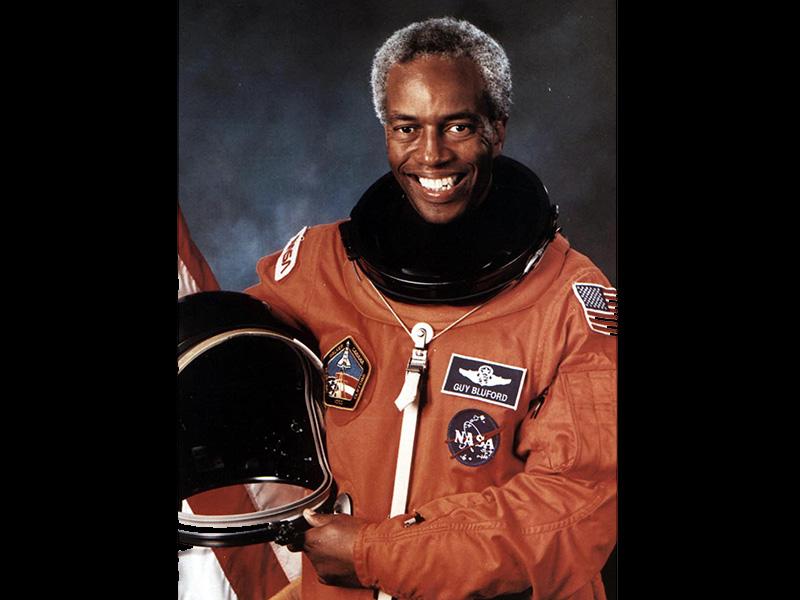 As a mission specialist aboard the space shuttle Challenger in 1983, Dr. Guion S.Bluford became the first African-American to travel into space. He was also the first African-American to return to space for a second, third, and fourth time. Bluford will deliver a lecture titled “Freefall: Flying in Space,” on the Rensselaer Polytechnic Institute campus on Wednesday, Nov.16. Photo credit: American Program Bureau Inc.

Greater Aircraft Efficiency Sought Through Improved Air Flow Control Techniques
Rensselaer GameFest 2021 To Be Held on May 8
Will Next Generation of Exascale Supercomputers Be Able To Work With Petascale Data?
Hepatitis C Drugs Multiply Effect of COVID-19 Antiviral Remdesivir
Co-Directors Named for Institute for Energy, the Built Environment, and Smart Systems
November 9, 2016

Troy, N.Y. – As a mission specialist aboard the space shuttle Challenger in 1983, Dr. Guion S.Bluford became the first African-American to travel into space. He was also the first African-American to return to space for a second, third, and fourth time. Bluford will deliver a lecture titled “Freefall: Flying in Space,” on the Rensselaer Polytechnic Institute campus on Wednesday, Nov.16. The event, hosted by the School of Science and the Student Success office, will be held in the Curtis R. Priem Experimental Media and Performing Arts Center (EMPAC) Concert Hall, beginning at 7 p.m. The event is open to members of the Rensselaer campus and local community.

“This year’s theme ‘Unity Underlying Diversity’ invites us to explore how the contributions of diverse scientists and thinkers can solve complex problems,” said Janelle Fayette, dean of the Office of the First-Year Experience.

In collaboration with the School of Science, the Office of the First-Year Experience assists undergraduate students in adapting to college. In 2014, Rensselaer was awarded a five-year, $1.2 million grant from the Howard Hughes Medical Institute (HHMI) as part of an education grant program aimed at improving the persistence of students working toward a degree in the science, technology, engineering, and mathematics (STEM) field. Wilfredo Colon serves as a professor and head of the Department of Chemistry and Chemical Biology, and principal investigator of the grant, which has enabled Rensselaer to build upon and expand a series of innovative approaches to teaching and mentorship that has improved outcomes for first-year STEM students.

“The HHMI grant is aimed at increasing persistence in STEM because we at Rensselaer recognize that it takes the talents and unique experiences of many to make the dreams of today tomorrow’s reality,” Fayette said. “Speakers like Dr. Bluford inspire our students to dream big and understand that we all have a part to play in addressing global challenges and expanding knowledge.”

During the lecture, Bluford plans to discuss how he became involved in the space program and his personal experiences. He also plans to talk about the future of NASA’s manned space flight program, and provide insight into how astronauts live in space. He also will discuss some of the activities that they perform in space.

After graduating from Penn State, Bluford earned his Air Force pilot wings and then flew 144 combat missions in Southeast Asia as an F4C fighter pilot, with 65 missions over North Vietnam. From 1967 to 1972, he served as a T-38 instructor pilot at Sheppard Air Force Base in Texas, training future Air Force and German fighter pilots.

Upon graduation from the Air Force Institute of Technology in 1974, he was assigned to the Air Force Flight Dynamics Laboratory as Deputy for Advanced Concepts for the Aeromechanics Division and then as Branch Chief of the Aerodynamics and Airframe Branch until his selection to the astronaut program in 1978.

In 1983, he became the first African-American to travel into space when he served as a mission specialist aboard the space shuttle Challenger. Bluford flew as a mission specialist and flight engineer aboard STS-8, on the first night launch and landing of the Space Shuttle. He assisted the commander and pilot in developing techniques for night-time operations. He also deployed the Indian National Satellite and operated the Continuous Flow Electrophoresis System.

In 1985, Bluford flew as a mission specialist on STS-61A, and led the international on-orbit payload team in the training and on-orbit operations of 76 experiments in the German D-1 Spacelab. In 1991, Bluford flew on STS-39, managing the operation of several experiments in support of the DOD Strategic Defense Initiative Office and then flew in 1992 on STS-53, a classified Space Shuttle flight.

Bluford was the first African-American to be awarded NASA’s coveted Astronaut Pin and the first African-American to be awarded the United States Air Force’s Command Pilot Astronaut Wings. He was inducted into the International Space Hall of Fame in 1997 and the U.S. Astronaut Hall of Fame in 2010. During this tenure with NASA, he logged over 5,200 hours flying a high-performance jet aircraft, and has flown 688 hours in space on four Space Shuttle missions, prior to this retirement in 1993.

The upcoming lecture exemplifies The New Polytechnic, an emerging paradigm for teaching, learning, and research at Rensselaer. The New Polytechnic emphasizes and supports collaboration across disciplines, sectors, and regions to address the great global challenges of our day, using the most advanced tools and technologies, many of which are developed at Rensselaer.

Additional co-sponsors from Rensselaer include the Rensselaer Union Speakers Forum, the Office of Graduate Student Experience, and the School of Engineering.

For more information regarding the lecture, contact the Office of Student Success via email: success@rpi.edu