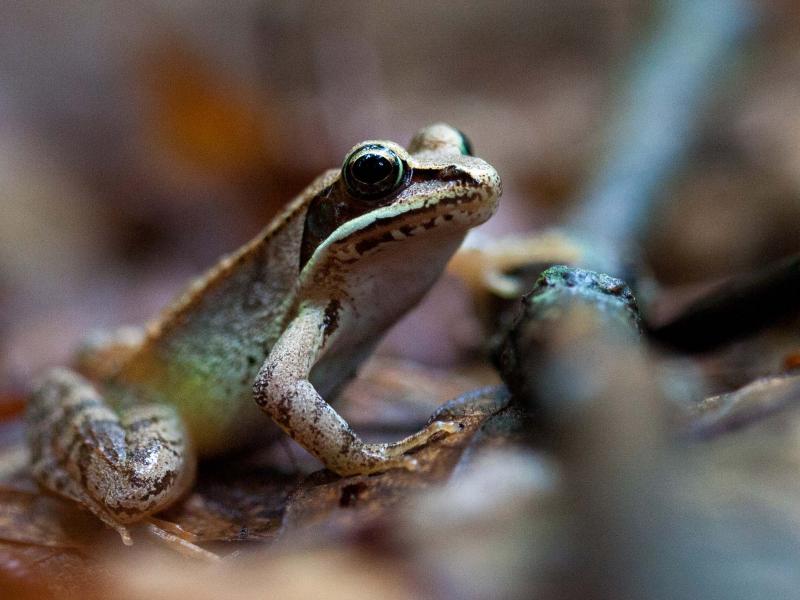 Naturally occurring chemicals found in de-icing road salts can alter the sex ratios in nearby frog populations, a phenomenon that could reduce the size and viability of species populations, according to a new study by scientists at Yale and Rensselaer Polytechnic Institute.

In a series of experiments, researchers found that the proportion of females within populations of tadpoles was reduced by 10 percent when exposed to road salt, or sodium chloride, suggesting that the salt has a masculinizing effect.

They also found that exposure to the leaf litter from a common trees species, oak, significantly altered the sex ratios in the frog populations and, in some cases, the size of individual females. Maple leaf litter, on the other hand, had no effect. More than 22 million metric tons of road salt is applied on U.S. roads each year. Maple and oak trees are dominant trees throughout temperate North America.

“Many scientists have studied similar effects from exposure to pharmaceuticals and pesticides, but now we’re seeing it from chemicals found in common road salt and leaf litter,” said Max Lambert, lead author of the paper and a doctoral student at the Yale School of Forestry & Environmental Studies. “The health and abundance of females is obviously critical for the sustainability of any population because they’re the ones that make the babies. So if you have a population that is becoming male-biased, the population might be at risk.”

The findings make use of experiments conducted as part of The Jefferson Project at Lake George testing the potential impacts of road salt and leaf litter on the health of aquatic ecosystems. The Jefferson Project – a collaboration between Rensselaer, IBM Research, and The FUND for Lake George – was founded to develop a new model for technologically enabled environmental monitoring and prediction to better understand and protect the Lake George ecosystem and freshwater ecosystems around the world.

The results were published in the Canadian Journal of Fisheries and Aquatic Sciences. Authors include Rick Relyea, a Rensselaer biologist and director of the Jefferson Project and the Darrin Fresh Water Institute, Aaron Stoler, a Rensselaer postdoctoral researcher, and Yale researchers David Skelly and Meredith Smylie.

According to their findings, frogs reared in oak leaf litter in the absence of salt exhibited a female-biased sex ratio (63 percent). Sex ratios in all other treatments contained statistically equal proportions of females and males. But when salt was added, it decreased the proportion of female frogs by 10 percent.

Meanwhile, within populations exposed to oak litter, developing female tadpoles were always larger than male tadpoles, which is fairly common among species that lay eggs. But when salt was added the female tadpoles decreased in size.

“The potential consequences to amphibian populations are interesting, including the continual masculinization of frog populations for many generations in habitats contaminated with high concentrations of road salt, which could potentially affect the abundance of frogs in these habitats,” said Relyea. “The research raises the possibility that many other aquatic species could be affected by road salts in sub-lethal ways, not only in terms of altered sex ratios, but potentially in many other traits.”

The scientists concluded that the “masculinizing” effect of salt was likely the result of a mechanism known as “sex reversal” during development. Previous research suggests that such outcomes could be caused by a phenomenon in which simple elements — such as sodium — can bind to a receptor in cells, mimicking the actions of testosterone or estrogen. This, in turn, can trigger masculinizing or feminizing functions.

“So there is a very small testosterone-like effect with one salt molecule,” Lambert said. “But if you’re dumping lots and lots of pounds of salt on the roads every winter that washes into these ponds, it can have a large effect.”

Stoler said additional results from the road salt and leaf litter experiments will be published in the coming months.