Exploring the Sublime Nature of Romantic Tragedy Through Music 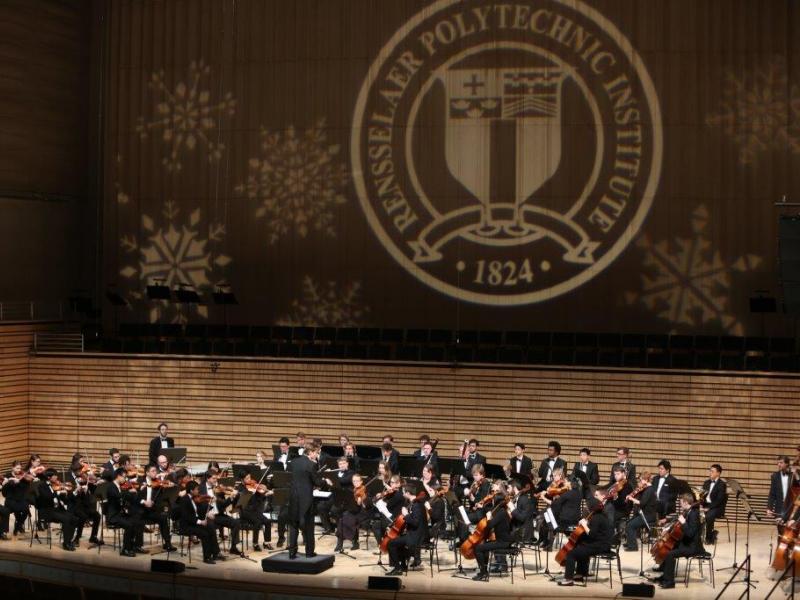 Last weekend, members of the Rensselaer Orchestra, under the direction of Nicholas DeMaison, senior lecturer of music in the Department of Arts, presented a concert of works exploring the sublime nature of romantic tragedy. The Rensselaer Orchestra is an ensemble of undergraduate and graduate students.

Exploring the Sublime Nature of Romantic Tragedy Through Music

An Overview of the Fall Rensselaer Polytechnic Institute Orchestra Concert

Troy, N.Y. — Last weekend, members of the Rensselaer Orchestra, under the direction of Nicholas DeMaison, senior lecturer of music in the Department of Arts, presented a concert of works exploring the sublime nature of romantic tragedy. The program took place on the Rensselaer Polytechnic Institute campus in the Curtis R. Priem Experimental Media and Performing Arts Center (EMPAC) Concert Hall on Nov. 19. Members of the campus and local community were invited to attend.

The Rensselaer Orchestra is an ensemble of undergraduate and graduate students. Established in 2013 by the Department of the Arts, the orchestra performs classics of the orchestral literature and regularly premieres new and experimental works. The group makes its performing home in EMPAC.

“It’s fascinating to me how when we are feeling blue, we seek out music that feels as if it comes from a place more blue than our own, and it is soothing to us,” said DeMaison. “In 19th century Europe, grand hopelessness was often paired with a grand quest for redemption or salvation, and together these urges forged, ultimately, an existential balance. The Rensselaer Orchestra performs a substantial amount of music that is brand new, but these pieces are really from the golden age of orchestral composition, and while I don’t often put together programs that are so culturally monolithic, it’s occasionally a useful experience for the ensemble to work through a set of pieces that are programmatically similar, but offer an extreme level of contrast in terms of musical challenge,” he said.

DeMaison is a composer and conductor who has led dozens of premieres of new operative, instrumental, choral, and multimedia works, described as “consistently invigorating” (New York Times), “spine-tingling” (Feast of Music), and “enchanted” (Seen and Heard International).

When DeMaison was hired in 2013, he brought the Rensselaer Orchestra and the Concert Choir forward to be offered as classes, added in a Chamber Ensemble course that could accommodate various iterations of smaller groups, and began developing and conducting a concert series each semester.

“Having an orchestra and a choir and a chamber program that are functioning at a high level is really important for letting people know that we take all of this seriously,” said DeMaison.

The ensembles are only the beginning, however, of how Rensselaer students can participate in the creative and collaborative possibilities of music making. The learning experience of contributing one part to a musical whole is one of the cognitive benefits of playing music, particularly for students who will find themselves in what School of Humanities, Arts, and Social Sciences (HASS) Dean Mary Simoni calls a “transdisciplinary” field such as biomedical engineering.

With sophisticated performance spaces, seasoned music faculty, and exciting new course offerings, HASS is working to raise the performance level of music ensembles and enrich Rensselaer students’ outlets for creative expression. Beginning in spring 2017, the Department of the Arts will offer private music lessons for instrumentalists and singers.

“We have a lot of students already happily living between the left and right brain—what I’m calling the sweet spot,” said Simoni. “They might have studied piano for a number of years, and they come here and still want to keep up their music.” Simoni herself inhabits that “sweet spot.” As a technologically savvy composer, arts administrator, pianist, and music theorist, she understood Rensselaer needed a 21st century music program to underpin and interact with the experimental new media. “As the music program expands at Rensselaer, we will continue to experience more sophisticated interdisciplinary musical performances,” she said.

To listen to recordings of the Rensselaer Orchestra, visit: https://soundcloud.com/rensselaer-orchestra