Musica Humana: Scientific & Spiritual Exploration of the Impact of Music on the Brain 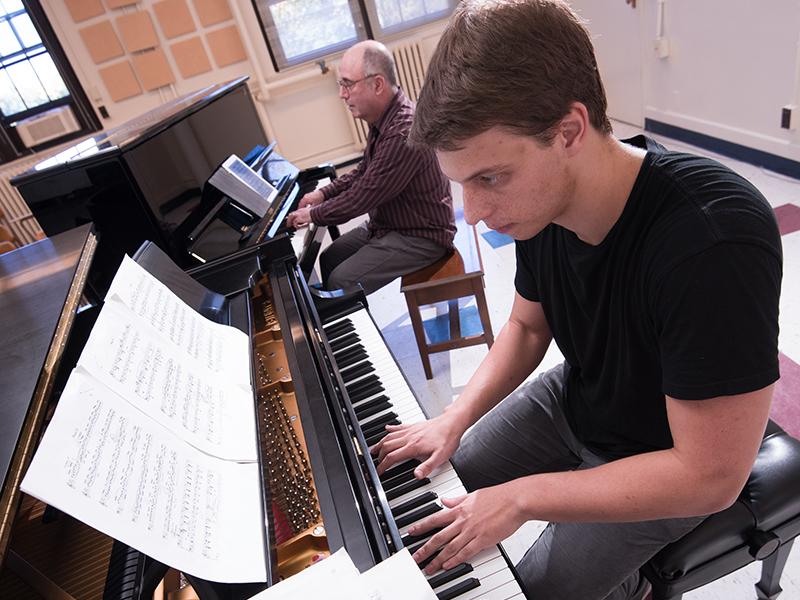 The Musica Humana/Musica Universalis concert, is part of Art_X@Rensselaer, an initiative that infuses education with the arts—by offering more opportunities to study artistic disciplines, like music, while expanding pedagogy and research with arts-inspired approaches to conceptual thinking. Pictured above, Michael Century professor of new media and music in the Department of the Arts in the School of Humanities, Arts, and Social Sciences (HASS) practices a piece that he will perform with Jon Patsenker '18.

Musica Humana: Scientific & Spiritual Exploration of the Impact of Music on the Brain

Troy, N.Y. — According to renowned neurologist Oliver Sacks, “music can move us to the heights or depths of emotion, but the power of music goes much further.” To hear and experience music’s potential, members of the Rensselaer Polytechnic Institute campus and local community are invited to a multimedia concert and lecture focused on the links between music and health, sponsored by the Center for Biotechnology and Interdisciplinary Studies (CBIS) and the Department of the Arts. The event will be held on Dec. 8, from 4:30 to 6 p.m. in the Curtis R. Priem Experimental Media and Performing Arts Center (EMPAC) Concert Hall.

The program’s full title, Musica Humana/Musica Universalis, is part of Art_X@Rensselaer, an initiative that infuses education with the arts—by offering more opportunities to study artistic disciplines, like music, while expanding pedagogy and research with arts-inspired approaches to conceptual thinking.

Century, who curated and will moderate and perform on the upcoming program, noted that the project is the outcome of a musical component of the Knowledge Innovation Program (KIP) of the Office of Research, which is focused on drug discovery for Alzheimer’s disease, led by protein engineering expert Peter Tessier, who serves as the Richard Baruch M.D. Career Development Professor at Rensselaer.

In 2015, Rensselaer created a seed fund to support multidisciplinary research at the private university. The funding is part of the KIP initiative, which aims to broaden the multidisciplinary reach of research teams and position those teams to be competitive in securing external funding.

“Music has served as a vital stimulus to health and well-being from times immemorial, with distinctive aspects varying across cultures,” Century said.

Drawing on the musical philosophy of classical antiquity, Century organized the program around the diverse ways music has been understood as reflecting both the harmony of the cosmos (Musica Universalis) and the inner harmony of the human body (Musica Humana). He also took cues from Tessier’s initial initiative to research the history of musical therapies used in neurological conditions such as dementia, broadening the scope of the program to include a multimedia blend of music performances, videos on present-day music therapy, and spoken word narrative.

The program features compositions from the European, North Indian, and Native American music cultures, highlighting Grammy-award winning bansuri player Steve Gorn, and Al and Jake George from the Cayuga Nation, who will explain the relationship of their performances to the concert theme in spoken introductions.  Members of the Rensselaer community who will perform in addition to Century include soprano Kimberley Dolanski, multimedia artist Eric Miller, a first-year Ph.D. student in electronic arts, and computer science undergraduate Jon Patsenker ’18.

During the program, scientific and therapeutic content will also be conveyed in video clips, featuring commentaries by the celebrated late neurologist Dr. Oliver Sacks. Sacks, a physician, best-selling author, and professor of neurology at NYU School of Medicine who passed away last year, chronicled the mysteries of the human brain for almost four decades. In his publication Musicophilia, Sacks explored the cognitive miracles of music.

“I love how the upcoming innovative program—which is Michael Century’s brainchild—highlights the powerful and inspiring role of music in human thought and memory,” said Tessier, whose work is pushing the frontiers of protein engineering toward fighting devastating diseases and addressing human health and quality of life. Tessier’s research focuses on designing, developing, and optimizing a class of large therapeutic proteins, or antibodies, that hold great potential for detecting and treating human disorders ranging from cancer to Alzheimer’s disease. Tessier also serves as a professor of chemical and biological engineering and is a member of the Center for Biotechnology and Interdisciplinary Studies.

“This concert is an unprecedented collaboration among HASS, Engineering, EMPAC, and the Office of Research,” said HASS Dean Mary Simoni, who is also a technologically savvy composer, arts administrator, pianist, and music theorist. “With an Art_X steering committee comprised of faculty and staff from across campus now in place, we’re poised to energize teaching and research at the intersection of the arts and sciences. Stay tuned for more!”

Launched in Fall 2015, Art_X@Rensselaer is introducing learning opportunities throughout the curriculum, from interdisciplinary lectures at the Curtis R. Priem Experimental Media and Performing Arts Center (EMPAC) and the Center for Biotechnology and Interdisciplinary Studies (CBIS), to incorporating design considerations into engineering courses. But it might be said the initiative is rooted in earlier decisions to further develop music at Rensselaer.

For more information about the School of Humanities, Arts, and Social Sciences, visit: http://www.hass.rpi.edu/

For more information about the Center for Biotechnology and Interdisciplinary Studies, visit: http://biotech.rpi.edu/