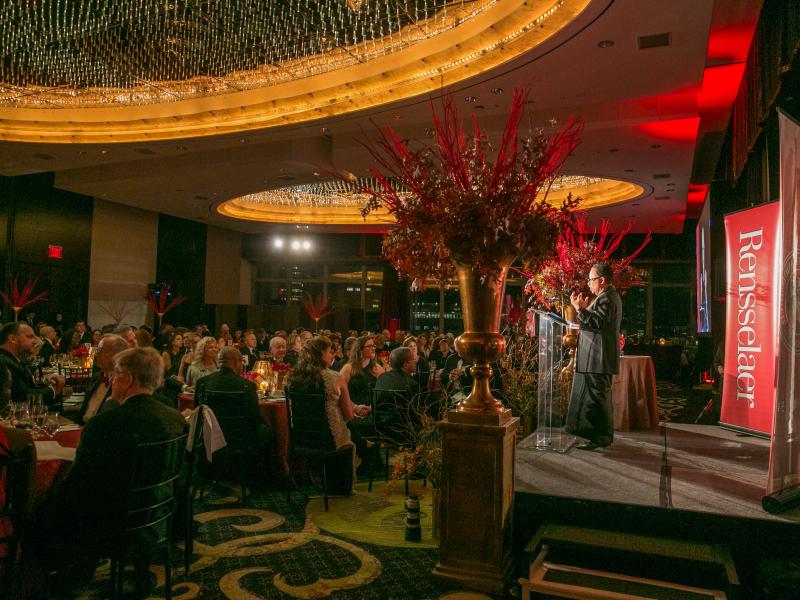 The inaugural Rensselaer Scholarship Gala was held at the Mandarin Oriental in New York City Nov. 17.

Rensselaer held its Inaugural Scholarship Gala—and announced that is has raised over $24 million in scholarship support in the last two years—at the Mandarin Oriental in New York City Nov. 17. The Gala raised support for the Institute’s scholarship initiative, Bridging the Gap, and presented its newest honor, the Presidential Lifetime Achievement Award, to three recipients—IBM, Howard N. Blitman P.E., Class of 1950, and Curtis R. Priem, Class of 1982.

The Scholarship Gala was established to encourage support for endowed scholarships that will enable Rensselaer to meet the full financial aid need for students, nearly half of whom require aid, thus “Bridging the Gap” between student need and institutional support. The gala was made possible, in part, by the support of two dozen corporate sponsors, including IBM, Bank of America Merrill Lynch, the Whiting-Turner Contracting Company, and SI Group.

In advance of the gala event, the following donors had kick-started the effort by donating a million dollars or more to create endowed undergraduate scholarships: The Priem Family Foundation, Kathleen M. and Paul J. Severino (Class of 1969), Wanda Denson-Low (Class of 1978) and Ronald Low, Jeanne Page Fischer and Frank M. Fischer (Class of 1964), and Rensselaer President Shirley Ann Jackson and her husband, Morris A. Washington.

“We are grateful for the generosity of our donors—for your investment in the future of Rensselaer, in the future of talented young people of modest means, and in the future of the world they will change for the better,” said President Jackson. “I am proud to be counted among you, both as a former scholarship recipient, and as a current supporter.”

“At Rensselaer Polytechnic Institute, we are transformative in the global impact of our research, in the remarkable education we offer our students, and in their lives, as well,” said President Jackson in presenting the awards. “But none of this is possible without partnerships, and without philanthropy. Tonight, we honor three towering figures in our present and future with the Presidential Lifetime Achievement Awards.”

Howard N. Blitman is a consulting engineer and president of The Blitman Building Corporation, located in White Plains, N.Y. His career accomplishments span institutional, academic, residential, commercial, and military construction. He earned his bachelor’s degree at Rensselaer in civil engineering, and was named a fellow of the American Society of Civil Engineers in 2005.

Blitman has been active at Rensselaer as a trustee, adviser, volunteer, and philanthropist. He has established a professorship in engineering, a fellowship sponsored by alumni in construction, and a gift to the endowment that led to the successful conversion of a hotel in downtown Troy into an engaging living space for students, benefiting both the university and the city of Troy. Blitman’s legacy at Rensselaer started with his father, Charles Blitman, who graduated in 1914, and continues with his great-grandson, Jacob, a member of the Class of 2017.

Curtis R. Priem is an inventor who has authored almost 200 patents, all of which relate to graphics and input/output. He designed the first graphics processor for the PC, the IBM Professional Graphics Adapter, and was a co-founder and chief technical officer of NVIDIA Corp., a manufacturer of graphics and multimedia integrated circuits.

Priem earned his bachelor’s in electrical engineering at Rensselaer, where he has served on the board since 2004. In recognition of his historic $40 million gift to the Institute, Rensselaer named the Experimental Media and Performing Arts Center in his honor. His philanthropy has supported faculty, research, and undergraduate scholarships at Rensselaer.

Ginni Rometty, chairman, president, and chief executive officer of IBM, accepted the award for IBM. Rometty began her career with IBM in 1981 and rose to become the first woman to lead the company. Rometty earned her bachelor of science in computer science and electrical engineering at Northwestern University. In 2014 she received an honorary doctorate and gave the Commencement address at Rensselaer.

The Rensselaer-IBM partnership dates back decades to the revolutionary IBM System/360, first announced in 1964. Today, IBM is engaging with Rensselaer in joint investigations that include the Institute’s IBM Blue Gene/Q supercomputer, the most powerful supercomputer at an American private university; the Jefferson Project on Lake George, which is using advanced data analytics and visualization tools to investigate the stressors on water quality; and the Cognitive and Immersive Systems Laboratory, which merges human cognition and artificially intelligent cognitive systems in pushing the frontiers of knowledge.

“All three of our honorands have been extremely forward-looking in their careers, leading their companies, and their fields of endeavor, into the future,” said Jackson. “But tonight, we honor them for looking even further forward, and for contributing to generations to come, by enhancing the remarkable education we offer at Rensselaer Polytechnic Institute—and by giving talented young men and women the opportunity to change the world.”

Since joining Rensselaer in 1999, Jackson has led a transformation of the university’s pedagogical and research approach under the construct of The New Polytechnic, an emerging paradigm for teaching, learning, and research at Rensselaer. The New Polytechnic emphasizes and supports collaboration across disciplines, sectors, and regions to address the great global challenges of our day, using the most advanced tools and technologies, many of which are developed at Rensselaer.