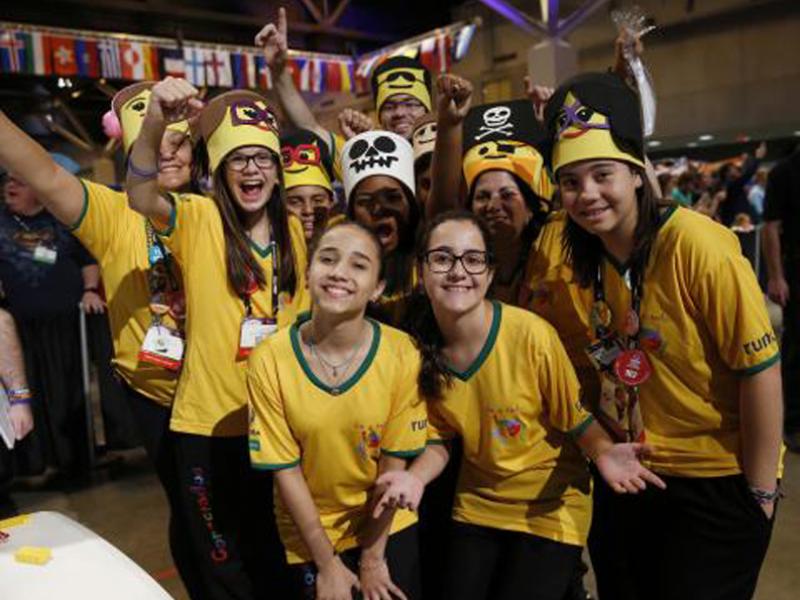 Rensselaer and Hudson Valley FLL To Host FIRST LEGO League Robotics tournament for elementary and middle school students on Dec. 10. The The global FLL competition is being brought to the region for the ninth time through a partnership between Rensselaer, Hudson Valley FLL, and NY Tech Valley FIRST sponsors. Photo credit: Archival photo from FIRST

Troy, N.Y. — Can you think of people and animals as allies in the quest to make life better for everyone? Just ask the 12 elementary and middle school teams from the Capital Region that will compete in the FIRST LEGO League (FLL) Regional Qualifying Tournament on Dec. 10 at Rensselaer Polytechnic Institute (RPI). More than 120 students have been working together to use their imaginations and creativity in combination with science, technology, engineering, and math (STEM) to seek explore how to make their interactions with animals better and hopefully improve those interactions for all of us.

The global FLL competition is being brought to the region for the ninth time through a partnership between Rensselaer, Hudson Valley FLL, and NY Tech Valley FIRST sponsors. The program kicks off with the opening ceremonies on the Rensselaer campus at 9:25 a.m. in the Darrin Communications Center (DCC), room 308. Immediately following, the robotics competition begins and culminates with a closing ceremony and awards presentation beginning at 3:30 p.m.

As part of this year’s challenge, titled Animal Allies SM, more than 28,000 teams of students from over 80 countries will identify a problem that happens when animals and humans interact. Teams will work on finding a solution that adds value to society that makes the interaction better for animals, people, or both.

“Teams and their coaches have been meeting since September to prepare for this event. FLL isn't just about the robotics competition, teams have also prepared to present to three different panels of judges in the areas of Core Values, Robot Design, and Project Presentation. So many elements allow each team member to show their talent or shine if you will while demonstrating their teamwork, innovation and critical thinking skills,” said Jordan Vener, who serves as senior program manager for Interactive Technologies in the Center for Initiatives in Pre-College Education (CIPCE), which works with area teachers and students to promote the use of robotics in the classroom.

FLL is the middle school component of the FIRST Robotics Competition, an international contest that teams professionals and young people to solve an engineering design problem in a competitive way. Over an eight-week period, teams work to build, test, and program an autonomous robot using a LEGO® MINDSTORMS® set to solve missions on an obstacle course.

Sample missions include: shipping a shark to a new location without jostling it in its tank, exchanging animals with another team for behavioral study, feeding animals the correct type of food, bringing an onboard camera that has been attached to a seal back to the lab, releasing a panda back into the wild, or providing an animal with a wheeled prosthesis and return it to its farm to live with its friends.

“The Animal Allies Challenge provides students with an opportunity to understand common themes that connect science, technology, engineering, and mathematics (STEM),” Vener said. FIRST LEGO League challenges encourage students and their coaches to contact scientists and engineers of the real world or research how they are addressing the types of problems  these teams have embraced. Through this process of competitive play and problem solving we hope students will be inspired to consider a career in STEM.”

The tournament is supported by 60 volunteers, including Rensselaer students, faculty, and staff, along with area students from high school robotics teams. The teams of judges and referees are comprised of students from Rensselaer’s Science Ambassadors and Engineering Ambassadors organizations, along with longtime friends of CIPCE and FIRST.

“After eight intense weeks, the competition season culminates in high-energy, sports-like tournaments around the globe,” said Paul Schoch, associate professor in the Rensselaer Electrical, Computer, and Systems Engineering department, and director of the university’s Center for Initiatives in Pre-College Education (CIPCE). “It’s amazing to watch the teams of children guided by their volunteer coaches as they demonstrate their problem-solving skills, creative thinking, teamwork, competitive play, sportsmanship, and sense of community. We’re proud to again host this competition because events like this not only help students to bring technology to life through their hands-on participation, but it can also inspire them to consider future careers as scientists and engineers.”

FLL is a partnership between the LEGO Group and FIRST (For Inspiration and Recognition of Science and Technology), which was founded in 1989 by inventor Dean Kamen to motivate young people to pursue careers in science, technology, and engineering.