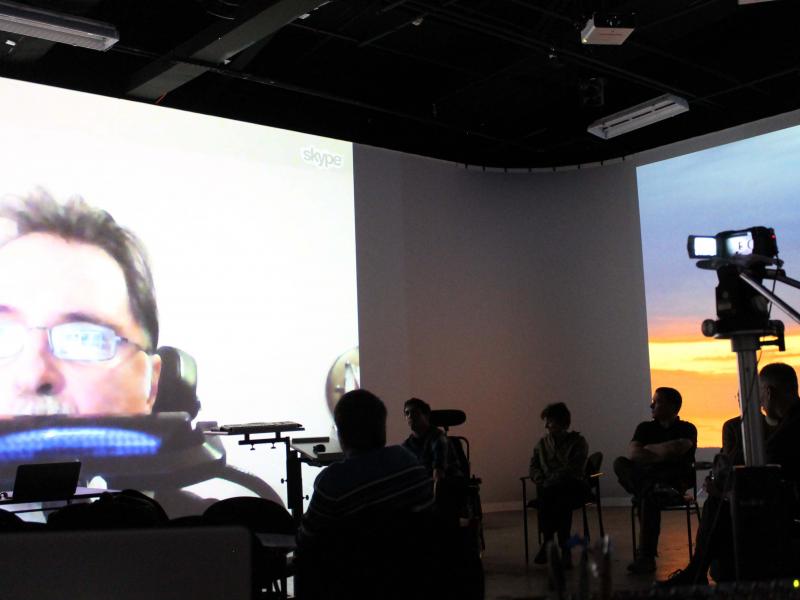 Art feeds on self-expression, and all artists are constrained by the limitations of their bodies and their tools. Working with artists with disabilities, a team including researchers at Rensselaer Polytechnic Institute has been creating more accessible tools and instruments that lower barriers to self-expression through the arts. With $100,000 in support from the Craig H. Neilsen Foundation, the team will extend that access to a wider community.

“Artists shouldn’t have to fight with their interface. Our work is about creating more accessible instruments, collaborative performance tools, and social networking for artists,” said Jonas Braasch, director of the Center for Cognition, Communication, and Culture (CCC), associate professor of architecture, and research coordinator.

“Ultimately, we want to bring it to a level where somebody with a disability can manufacture those tools themselves and create their own artistic projects at a high level through a platform for artists inclusive of all abilities,” Braasch said.

Mobility-restricted artists are eager users of such tools and platforms, but the development of new interfaces benefits all artists, Braasch said.

“Communities of people with disabilities are pioneers in developing and using these devices – so long as a system allows them the opportunity to explore their artistic expression, they are willing to take the time to learn how to use it and to offer solutions that improve the system for everyone,” Braasch said.

In recent projects, team members have been involved in growing networks of like-minded artists and developers, and in developing tools for individual artistic expression and group performance. In many instances, projects built upon the resources of the CCC and the Deep Listening Institute, founded by Pauline Oliveros, a Distinguished Research Professor of Music at Rensselaer, composer, and leader of avant-garde and improvisatory music. Oliveros, who was 84, died on November 24, 2016.

In 2007, the Deep Listening Institute (which has since merged with the Center for Deep Listening at Rensselaer) helped debut the Adaptive Use Musical Instrument (AUMI), a software interface that enables people with severe mobility restrictions to engage in music making. AUMI was first used in drum workshops with children at Abilities First School in Poughkeepsie, New York, and is now available as a free internet download.

Team member David Whalen, a lawyer, quadriplegic, and entrepreneur, is the creator of Jamboxx, a harmonica-like computer interface and software package that controls a digital musical instrument, paint brush, and game controller.

The fourth member of the team, Ted Krueger, Rensselaer associate professor of architecture, had a longstanding interest in ideas of extending human perception through advanced technologies. With a 2012 grant from the National Science Foundation (NSF), Braasch and Oliveros were part of a collaboration to develop the Creative Artificially Intuitive Reasoning Agent, a digital conductor that can guide improvised performances of avant-garde music.

In that same year, the Christopher and Dana Reeve Foundation supported the first International Symposium on Adaptive Technology for Music and Art (ISATMA), an annual one-day event promoting new technologies and artistic experiences dealing with physical limitations of the human body and embodiment in general. The symposium is hosted by the CCC.

With the new grant from the Craig H. Neilsen Foundation, the team will design technology for a social music network to enable disabled musicians to perform in groups over the internet. The project draws on elements of previous research like AUMI and Jamboxx, as well as the Collaborative-Research Augmented Immersive Virtual Environment (CRAIVE) Laboratory at Rensselaer – a large-scale virtual environment built around a 40-foot long oval projection space and 128-channel loudspeaker system – as a performance space.

“Think of how easy it is for a group of musicians to set up their instruments in a concert hall. Jamboxx and AUMI are well-developed instruments for individual performers, but the technology for group performances over telepresence – which would be very advantageous for these groups – hasn’t been developed,” Braasch said. “That’s the goal of this research.”

The Craig H. Neilsen Foundation was established in 2002 to award grants to a broad spectrum of charities, including those that benefit spinal cord injury efforts. Today, with assets of approximately $500 million, the foundation is primarily dedicated to funding extensive research, education, and quality of life programs for improving the lives of people affected by spinal cord injury.