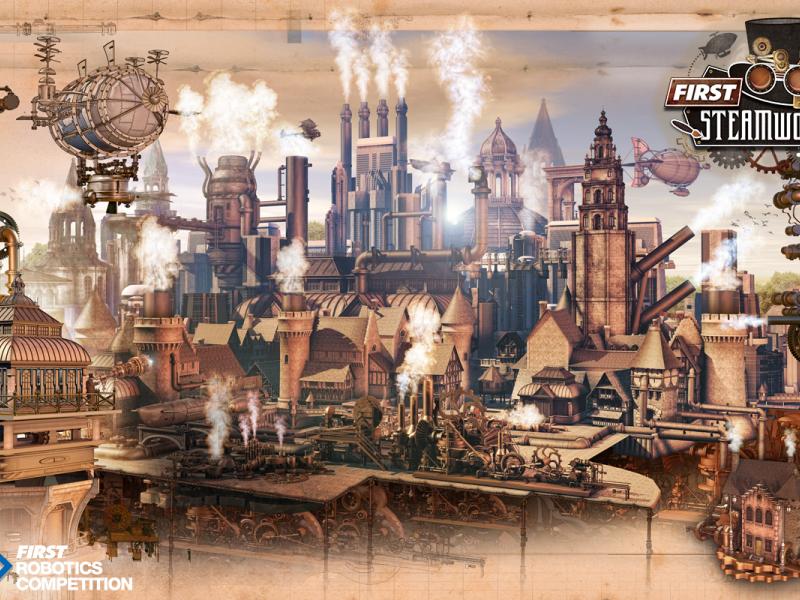 Rensselaer Polytechnic Institute will once again host the New York Tech Valley Regional FIRST robotics competition March 16-18 on the Rensselaer campus in the East Campus Athletic Village. The 2017 robotics challenge FIRST STEAMWORKSSM invites two adventure clubs from an era in which technology relied on steam power to prepare their airships for the ultimate long-distance race.

Following the remarks, the full details of the 2017 competition challenge were revealed via a global live broadcast led by inventor and FIRST® Founder Dean Kamen before a crowd of more than 1,000 people at Southern New Hampshire University in Manchester, N.H., hometown of the FIRST headquarters. This year, more than 83,400 high school students on 3,336 teams at 123 venues around the globe in Australia, Canada, China, Dominican Republic, Israel, Mexico, Turkey, and the United States joined the 2017 Kickoff via Twitch Livestream.

“A lot of kids will tell you, ‘I don’t like science and math.’ But they all love [science fiction]. Well, the only difference between science fiction and science is timing,” said Dean Kamen, president of DEKA Research & Development. “We want kids, through their FIRST experience, to realize that whatever is in their imaginations could become reality if they develop the tools – science, technology, engineering – and apply those tools into innovations to turn today’s science fiction into tomorrow’s science.”

The 2017 robotics challenge FIRST STEAMWORKSSM invites two adventure clubs from an era in which technology relied on steam power to prepare their airships for the ultimate long-distance race. Each three-team alliance scores points and prepares to take flight by building steam pressure, gathering materials to start the rotors, and boarding robots onto their airships. The adventurer club with the highest score at the end of the match is the best prepared for the race and wins.

During the kickoff, teams were shown the game field and challenge details, and received a Kit of Parts made up of motors, batteries, control system components, construction materials, and a mix of additional automation components – along with limited instructions.

“The FIRST Robotics Competition isn’t just about the robots,” said Paul Schoch, associate professor in the Rensselaer Electrical, Computer, and Systems Engineering department, and director of the university’s Center for Initiatives in Pre-College Education (CIPCE), who is serving as a co-chair along with Mary Burke. "The competition is about team management, fund raising, outreach, brainstorming, prototyping, and game strategy,in addition to the technical skills of mechanical design, computer-aided design, programming, electronics, and autonomous and tele-operated control. The competition season culminates in a series of high-energy, sports-like tournaments around the globe that match the excitement and glamour of varsity sport playoff games.”

Schoch also noted that FIRST creates powerful mentoring relationships between students and a broad range of professional mentors, who are working in the fields of engineering, science, management, and manufacturing. “Many of our mentors are from some of the most respected companies in their region, and the experiences and guidance that they offer to students is far beyond what happens in the classroom,” Schoch said. “Students have an opportunity to work closely and learn from these mentors which can also inspire them to consider future careers in STEM.”

In its fourth year, the New York Tech Valley FIRST® Regional Robotics Competition is the ultimate Sport for the MindTM where imagination and innovation come together. By combining the excitement of sport and beauty of art with the rigors of science and technology, teams of high school students are challenged to design a team “brand,” hone teamwork skills, and build and program robots to perform tasks against a field of competitors, according to the organization.

Working with adult mentors, students have six weeks to design, build, program, and test their robots to meet the season’s engineering challenge. Teams will participate in one or more of the 145 Regional and District events that measure the effectiveness of each robot, the power of collaboration, and the determination of students. Some participating Capital Region teams are from Albany, Ballston Spa, Cambridge, Colonie, Latham, Shenendehowa, Shaker, Schuylerville, and Voorheesville high schools, among others. Teams also hail from other parts of New York state, including Potsdam, Oneonta, Carmel, and Brooklyn, along with a team from Dorchester, South Carolina, five teams from different regions in Canada, and a team from India and Turkey.

The 2017 FIRST® Championships will be held April 19-22 in Houston, Texas, and also on April 26-29 in St. Louis, Missouri. Participating FIRST Robotics Competition students are also eligible to apply for more than $30 million in scholarships from nearly 200 colleges and universities.

To get a sneak peek of the FIRST® Robotics Competition STEAMWORKS theme, visit: http://bit.ly/2jbU3yb

Accomplished inventor Dean Kamen founded FIRST® (For Inspiration and Recognition of Science and Technology) in 1989 to inspire an appreciation of science and technology in young people. Based in Manchester, N.H., FIRST designs accessible, innovative programs to build self-confidence, knowledge, and life skills while motivating young people to pursue opportunities in science, technology, and engineering. With support from over 200 of the Fortune 500 companies and more than $30 million in college scholarships, the not-for-profit organization hosts the FIRST® Robotics Competition for students in Grades 9-12; FIRST® Tech Challenge for Grades 7-12; FIRST® LEGO® League for Grades 4-8; and FIRST® LEGO® League Jr. for Grades K-4. Gracious Professionalism® is a way of doing things that encourages high-quality work, emphasizes the value of others, and respects individuals and the community. To learn more about FIRST, go to www.firstinspires.org