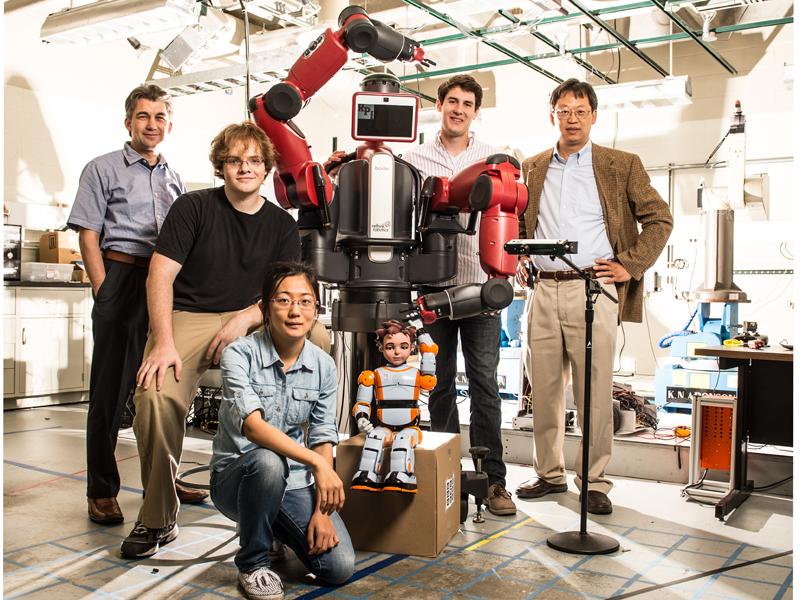 Rensselaer Polytechnic Institute will be a founding member of the 14th Manufacturing USA institute – the Advanced Robotics Manufacturing (ARM) Innovation Hub. The Department of Defense (DoD) will provide $80 million in federal funding to launch the ARM Institute, led by Carnegie Mellon University, to stimulate robotics technology development in manufacturing environments. The investment will be matched by a $173 million contribution pledged by the winning coalition, comprised of more than 220 partners, including industry, universities, community colleges, nonprofit organizations, and state and local governments from across the country. Photo credit: Rensselaer Polytechnic Institute

Troy, N.Y. — Rensselaer Polytechnic Institute will be a founding member of the 14th Manufacturing USA institute – the Advanced Robotics Manufacturing (ARM) Innovation Hub. The Department of Defense (DoD) will provide $80 million in federal funding to launch the ARM Institute, led by Carnegie Mellon University, to stimulate robotics technology development in manufacturing environments. The investment will be matched by a $173 million contribution pledged by the winning coalition, comprised of more than 220 partners, including industry, universities, community colleges, nonprofit organizations, and state and local governments from across the country.

The ARM Institute is the eighth DoD-led manufacturing institute, and now joins the Manufacturing USA network in its collective effort to help revitalize American manufacturing and incentivize companies to invest in new technology development in the United States.

“The Advanced Robotics Manufacturing (ARM) Institute will build a public-private partnership that tightly integrates a nationwide network of regional expertise in design, manufacturing, and deployment of robotics for collaborative, flexible, and innovative manufacturing,” said robotics and systems expert John T. Wen, professor of electrical and computer systems engineering and head of the Department of Industrial and Systems Engineering in the School of Engineering at Rensselaer, who is also part of the ARM Institute leadership team.

Rensselaer will co-lead the Mid-Atlantic Regional Robotics Innovation Collaborative (RRIC) with the statewide New York Manufacturing Extension Partnership (MEP) Center, FuzeHub, which is funded by the New York State Division of Science, Technology and Innovation (NYSTAR). Wen noted that FuzeHub connects New York’s small and mid-sized manufacturing companies to the resources, programs, and expertise they need for technology commercialization, innovative solutions, and business growth. “Since robotics is not yet widely used by small and medium-sized enterprises because of cost, difficulty in adaptation, and access to hardware and software, Rensselaer and the Regional Robotics Innovation Collaborative will address these shortcomings and foster the adoption of robotics at these small and medium- sized enterprises.”

In addition to FuzeHub, the Center for Automation Technologies and Systems (CATS) at Rensselaer, which is supported by NYSTAR and has a long history of successful collaborative research with New York state industries, will be a key partner in the ARM Institute.

The ARM Institute will usher in significant new opportunities in collaborative robotics – robot control, autonomy and mobility, perception and sensing, and other key areas – that will have a profound impact on numerous New York state companies in the U.S. defense supply chain and commercial manufacturing sector. The Institute will also focus on addressing robotics-related education and workforce development challenges, issues of great importance to New York’s economy.

“These federal funds will help New York continue to be a world leader in advanced robotics,” said U.S. Senator Kirsten Gillibrand. “This partnership forged by the Advanced Robotics Manufacturing institute, with key strategic partners like Rensselaer, will open new doors to innovation and help to develop technology to help protect against new and constantly changing threats. This funding creates new opportunities to enhance our national security while training a new generation of STEM workers and helping to launch new companies that grow from their cutting-edge research.”

According to the Department of Defense, the use of robotics is already present in manufacturing environments, but today’s robots are typically expensive, singularly purposed, challenging to reprogram, and require isolation from humans for safety. Robotics is increasingly necessary to achieve the level of precision required for defense and other industrial manufacturing needs, but the capital cost and complexity of use often limits small to mid-size manufacturers from utilizing the technology.

“Rensselaer’s contributions to the ARM Institute and the Robotics Collaborative affirm our leadership in advanced manufacturing research and education,” said Shekhar Garde, dean of the School of Engineering. “In fact, the announcement of the ARM Institute along with recent announcements of a DOE Clean Energy Smart Manufacturing Innovation Institute (CESMII) and National Institute for Innovation in Manufacturing Biopharmaceuticals (NIIMBL), completes a trifecta for Rensselaer! We are looking forward to working with our industry and academic partners to make transformative contributions to modern manufacturing, leading to job creation in the state of New York and in the United States.”

“New York’s Capital Region is one of the leading places in the world to conduct cutting-edge research and innovation,” said U.S. Representative Paul D. Tonko. “This award builds on that well-earned identity, investing in some of the most promising talent in our region to generate new disruptive and transformative technologies that will create the products of the future and even reimagine the nature of manufacturing. My heartfelt congratulations to John Wen, the FuzeHub team, and the entire RPI community for this exciting and well-deserved opportunity.”

In June 2011, the U.S. President’s Council of Advisors on Science and Technology (PCAST) released a report to the President on “Ensuring American Leadership in Advanced Manufacturing.” Rensselaer President Shirley Ann Jackson co-authored this report, which provided an overarching strategy and specific recommendations for revitalizing the nation’s leadership in advanced manufacturing. The report helped to inspire the National Network for Manufacturing Innovation, a series of linked hubs for advanced technologies, each with its own concentration, which now includes the Smart Manufacturing Innovation Institute. Appointed by President Obama, Jackson served on PCAST from 2009 to 2014. She also served on the Advanced Manufacturing Partnership 2.0 Steering Committee, which made further recommendations to the President on enhancing the nation’s capacities in advanced manufacturing.

For example, in June 2016, it was announced that the Smart Manufacturing Leadership Coalition (SMLC) would lead the new Smart Manufacturing Innovation Institute, in partnership with the Department of Energy (DOE). The winning coalition, headquartered in Los Angeles, California, brings together a consortium of nearly 200 partners from more than 30 states—including Rensselaer, the Northeast Center leader—to spur advances in smart sensors and digital process controls that can radically improve the efficiency of U.S. advanced manufacturing.

In addition, in December 2016, Rensselaer became part of a new $200 million public-private partnership to advance U.S. leadership in biopharmaceuticals. A $70 million award from the U.S. Commerce Department will establish the new National Institute for Innovation in Manufacturing Biopharmaceuticals (NIIMBL), complementing an initial private investment of at least $129 million from a consortium of more than 150 companies, educational institutions, nonprofits, and state governments.

No stranger to the field of manufacturing, the School of Engineering at Rensselaer already has an established manufacturing network that offers students, faculty, and industry access to a variety of fabrication and production services and expertise; in addition to the Manufacturing Innovation Learning Lab (MILL), which is helping to revitalize advanced manufacturing education at Rensselaer, and bring smart manufacturing concepts to undergraduate and graduate education.

At Rensselaer, this initiative is enabled by the vision of The New Polytechnic, an emerging paradigm for higher education which recognizes that global challenges and opportunities are so great they cannot be adequately addressed by even the most talented person working alone. Rensselaer serves as a crossroads for collaboration — working with partners across disciplines, sectors, and geographic regions — to address complex global challenges, using the most advanced tools and technologies, many of which are developed at Rensselaer. Research at Rensselaer addresses some of the world’s most pressing technological challenges — from energy security and sustainable development to biotechnology and human health. The New Polytechnic is transformative in the global impact of research, in its innovative pedagogy, and in the lives of students at Rensselaer.