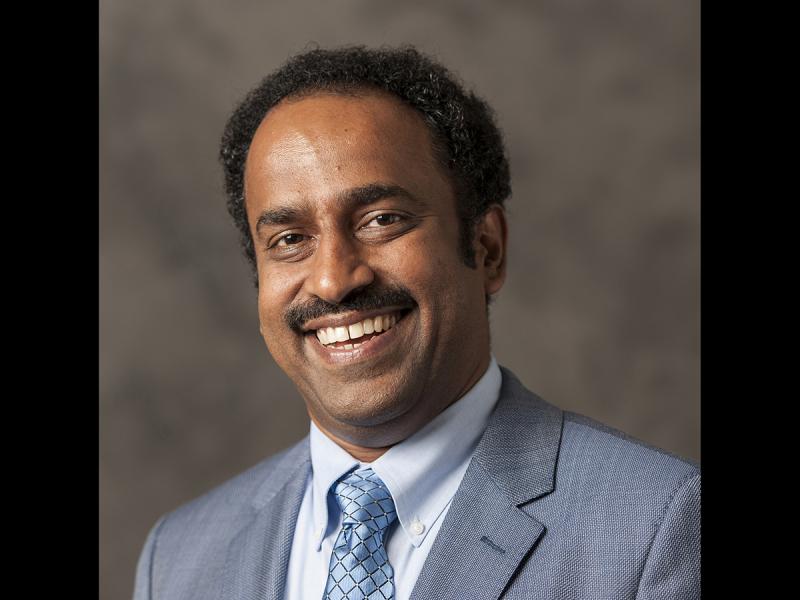 Ganpati Ramanath, the John Tod Horton '52 Professor of Materials Science and Engineering at Rensselaer Polytechnic Institute, has been named a fellow of the American Physical Society (APS). The APS Fellowship Program recognizes members who have made advances in physics through original research and publication or significant innovative contributions in the application of physics to science and technology.

Nominated by the APS Division of Materials Physics, Ramanath was cited for “creative approaches to realize novel properties in bulk nanomaterials fabricated from nanocrystal building blocks and molecularly tailored interfaces; and uncovering atomistic and electronic structure-level mechanisms of property enhancements.”

Known throughout the global materials science and engineering community as a research leader, inventor, and innovator, Ramanath focuses his research on developing a fundamental understanding of structure-processing-property relationships in nanomaterials and interfaces for emergent applications in energy and electronics. His discoveries include a new class of thermoelectric nanomaterials built from assemblies of sculpted nanostructures for high-efficiency solid-state refrigeration and electricity harvesting from waste heat, along with nanomolecular layers of “nanoglue” that can join non-sticking materials, inhibit chemical intermixing, and boost thermal and electrical transport.

“I congratulate Prof. Ramanath for this well-deserved recognition of his work. His work in advanced nanomaterials represents both fundamental understanding and creative applications,” said Shekhar Garde, dean of the School of Engineering. “To be recognized by the American Physical Society is a special honor for a materials scientist and an engineer.”

A prolific researcher, Ramanath has published more than 165 articles in top journals including Nature, Science, Nature Materials, and Advanced Materials, and one book chapter, and holds nine U.S. patents. His works have been cited more than 7,500 times. He served as an editor of IEEE Transactions on Nanotechnology, and is an editorial advisory board member for the Journal of Experimental Nanoscience.

Ramanath is a director and co-founder of ThermoAura Inc., a nanomaterials and clean-energy startup company that is commercializing novel thermoelectric nanomaterials developed in his laboratory. He served as the director of the Rensselaer Center for Future Energy Systems, a New York State Center for Advanced Technology, from 2008 to 2010.

He is the recipient of numerous awards, including the Friedrich Wilhelm Bessel Award; the Brahm Prakash Chaired Professorship at the Indian Institute of Science, Bangalore, India; a National Science Foundation CAREER Award; the Bergman Young Scientist Award from the U.S.-Israel Binational Science Foundation; an IBM University Research Partnership Award; and an Alexander von Humboldt Fellowship; among others. He is a fellow of the American Vacuum Society.

Ramanath’s research exemplifies the vision of The New Polytechnic, an emerging paradigm for teaching, learning, and research at Rensselaer which recognizes that global challenges and opportunities are so complex, they cannot be addressed by even the most talented person working alone. The New Polytechnic emphasizes and supports collaboration across disciplines, sectors, and regions to address some of the world’s most pressing technological challenges, from energy security and sustainable development to biotechnology and human health. The New Polytechnic is transformative in the global impact of research, in its innovative pedagogy, and in the lives of students at Rensselaer.