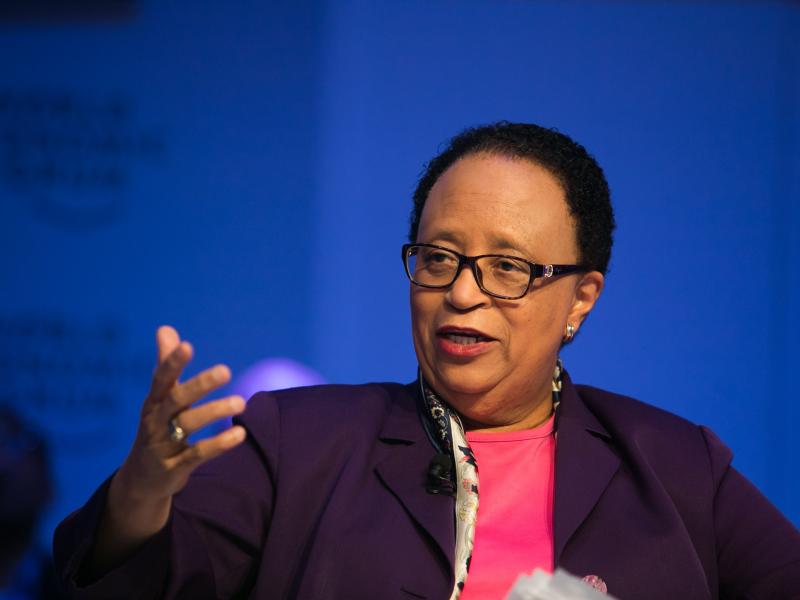 President Jackson has participated in this annual gathering of thought leaders in the Swiss Alps since 2008. A record 3,000 participants took part in over 400 panels, sessions, and conversations.

On the first day of the meeting, Jan. 17, President Jackson took part in a panel discussion on “Leadership in the Age of Political Risk.”

She also co-led a Humanitarian Hub informal dialogue about “Measuring for Maximum Impact” with Kamalini Lokuge of the Humanitarian Research Program at Australian National University. The two led a conversation about the ways that data science can help us to better understand environmental health threats to children.

On Jan. 18, President Jackson moderated a panel on “The Future of Warfare.” The digital revolution is blurring the lines between war and peace and expanding the boundaries of the battlefield to new domains. How can we prepare for a new kind of war? The panel featured an intense discussion, led by President Jackson, with Jean-Marie Guéhenno, International Crisis Group; Sir Lawrence Freedman, Kings College; Mary Cummings, Duke University; and Jeanine Hennis-Plasschaert, Minister of Defense, Netherlands.

Later that day, she moderated a panel on “Powering Mobility,” which focused on the intersections between technological advances in the transportation sector and in the energy sector, and their potential to drive a clean energy revolution that encompasses cars, buses, urban planning, and energy generation for homes and businesses.

On Jan. 20, President Jackson participated in a panel on “Cyber War: From attacks on critical infrastructure to attempts at sabotage of political processes, has the first cyber war already begun?”

She concluded her participation as a panelist discussing “The Global Security Outlook.” The panelists talked about the biggest challenges and opportunities in 2017.

While she was in Davos, President Jackson was interviewed by World Economic Forum staff for the forum’s annual Davos documentary. This year’s documentary explores the concept of responsive leadership, with a focus on female leaders. She was also interviewed by HUB Culture’s Edie Lush on the topic of women in STEM and leadership.

President Jackson’s participation at the World Economic Forum exemplifies the The New Polytechnic, an emerging paradigm for teaching, learning, and research at Rensselaer. The foundation for this vision is the recognition that global challenges and opportunities are so great they cannot be adequately addressed by even the most talented person working alone. Rensselaer serves as a crossroads for collaboration—working with partners across disciplines, sectors, and geographic regions—to address complex global challenges, using the most advanced tools and technologies, many of which are developed at Rensselaer. The New Polytechnic is transformative in the global impact of research, in its innovative pedagogy, and in the lives of students at Rensselaer.