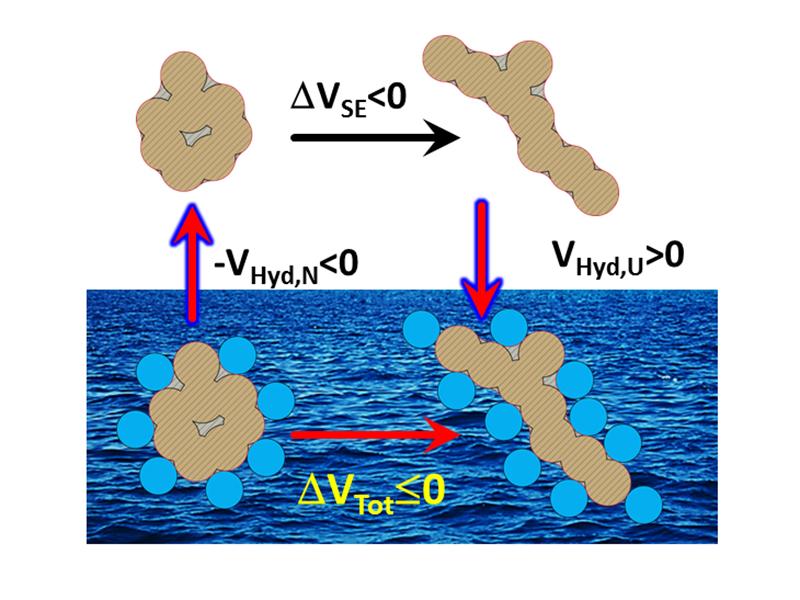 Durable proteins make life possible in the crushing depths of the ocean, and may have evolved in life below the surface of ice-bound oceanic exo-planets. These proteins stay folded – allowing them to perform their function — under immense pressures. But other proteins unfold under pressure, rendering them inoperable. What’s the difference between them?

For one thing, volume. Now, research published this week in Nature Communications makes it possible to predict how volume for a given protein will change between the folded and unfolded state. Computations accurately predict how a protein will react to increased pressure, shed light on the inner-workings of life in the ocean depths, and may also offer insights into alien life.

“We’re finding planets with ocean that, although cold at the surface, are likely warm at the bottom. So what would life look like in that space?” said George Makhatadze, a Constellation Professor of Biocomputation and Bioinformatics and member of the Center for Biotechnology and Interdisciplinary Studies at Rensselaer Polytechnic Institute. “With this computational ability, we can look at the proteome of barophillic organisms on Earth and ask – how do their proteins adapt?”

Scientists have long known that a protein will unfold under increased pressure if its unfolded state has a lower volume, and will remain folded if the unfolded state has a higher volume. But, while scientists experimentally measured a range of -4% to +1% change in volume as proteins immersed in water move from the folded to unfolded state, predictive computation to match those measurements has been harder to come by.

The protein volume paradox dates back to the first X-ray structures of proteins, when images showed that 30 percent of the volume of a protein is comprised of voids and cavities inside the imperfectly packed atoms of the structure. Researchers assumed proteins would lose about 30 percent of their volume when unfolded, and wondered at the disparity between that figure and experimental measurements.

Seeking to resolve the difference, researchers hypothesized that unfolded proteins were interacting with the water in which they were immersed, gaining volume, and proposed a “transfer method” to calculate that effect. Their method tested the volume change of several “model” molecules commonly found in proteins when moved from a non-aqueous solvent to water. However, the method yielded a small decrease in volume, compounding the disparity with measurements.

Makhatadze’s group found several mistaken assumptions in the two postulates of the paradox. Although the atoms of an unfolded protein are less densely packed than a folded one, the complex shape retains some voids and cavities, so a 30 percent decrease in volume is unrealistic. Also, the transfer method begins in error because the non-aqueous solvent creates a volume-boosting buffer that disappears when compounds are immersed in water.

The research group wrote a computer program to accurately calculate the volume of the unfolded protein, an advance published separately in a 2015 edition of BMC Bioinformatics, and found a 7 percent decrease in volume based on lost voids and cavities. Switching to a transfer method that moves compounds from a gas phase to water produced a slight increase in volume.

“So these two factors – the volume change when voids and cavities are eliminated through unfolding, and the volume change as the unfolded protein is exposed to water – are cancelling each other out in a very intricate way.”

Then Makhatadze’s group went a step further, finding a common property in the volume change of 140 molecules: when a model compound is immersed in water, only certain areas of the molecule increase in volume, namely those areas that are non-polar, or do not interact with water. With that information, the group calculated the percentage change in volume for more than 200 proteins and match the observed range of -4% to +1%.

“Not only do we reach the experimental range, we can also quantitatively predict the volume changes for a given protein.”

“Molecular determinant of the effects of hydrostatic pressure on protein folding stability” was published in the February edition of Nature Communications and can be found with DOI: 10.1038/ncomms14561. Calvin R. Chen, a graduate student in biological sciences, joined Makhatadze in the research, which was funded by the National Science Foundation Chemistry and Life Processes, and used the resources of the Rensselaer Center for Computational Innovations and the Extreme Science and Engineering Discovery Environment (XSEDE).

Makhatadze’s research is enabled by the vision of The New Polytechnic, an emerging paradigm for higher education which recognizes that global challenges and opportunities are so great they cannot be adequately addressed by even the most talented person working alone. Rensselaer serves as a crossroads for collaboration — working with partners across disciplines, sectors, and geographic regions — to address complex global challenges, using the most advanced tools and technologies, many of which are developed at Rensselaer. Research at Rensselaer addresses some of the world’s most pressing technological challenges — from energy security and sustainable development to biotechnology and human health. The New Polytechnic is transformative in the global impact of research, in its innovative pedagogy, and in the lives of students at Rensselaer.