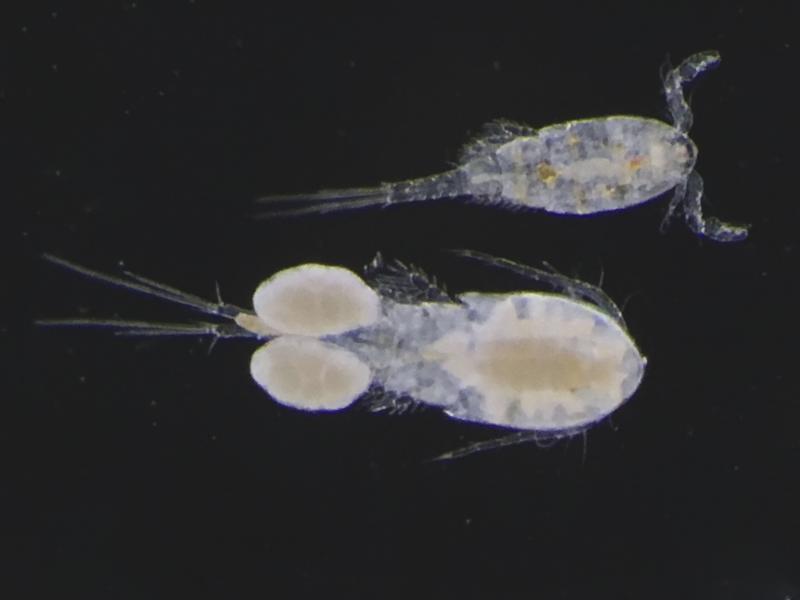 Organic additives found in road salt alternatives — such as those used in the commercial products GeoMelt and Magic Salt — act as a fertilizer to aquatic ecosystems, promoting the growth of algae and organisms that eat algae, according to new research published today in the Journal of Applied Ecology. Low levels of magnesium chloride — an alternative type of salt found in the commercial product Clear Lane – boost populations of amphipods, tiny crustaceans that feed on algae and serve as an important food source for fish.

Alternatives and additives to the most common form of road salt, sodium chloride, are marketed as environmentally friendly replacements because they allow highway crews to maintain ice-free roads while applying less salt. But the alternatives and additives may not be without environmental consequences, said Rick Relyea, director of the Jefferson Project at Lake George.

The research is part of the Jefferson Project at Lake George — a collaboration between Rensselaer, IBM Research, and The FUND for Lake George — founded to develop a new model for technologically enabled environmental monitoring and prediction to understand and protect the Lake George ecosystem and freshwater ecosystems around the world.

As part of the Jefferson Project, Relyea’s lab has undertaken a series of experiments into the effects of various road salts on diverse aspects of aquatic food webs, with some surprising results. Research published in January showed that a common species of zooplankton can evolve genetic tolerance to moderate levels of sodium chloride in as little as two and a half months. Research published in November 2016 showed that sodium chloride can alter the sex ratios in populations of developing frogs. Additional research has tracked the effects of various road salts on young trout that live in streams and wetland ecosystems.

Many of the experiments make use of mesocosms, large outdoor tanks or chutes filled with water and outfitted to mimic lake, wetland, or stream ecosystems.

In the new research on salt alternatives — the first study to ever compare the effects of road salt alternatives and additives on aquatic ecosystems — researchers outfitted 64 mesocosms with many of the important players in an aquatic food web including, algae, zooplankton, amphipods, isopods, and snails. The researchers prepared five “treatments” of road salts:  sodium chloride (rock salt); magnesium chloride; sodium chloride with a small amount of magnesium chloride (e.g., Clear Lane®); sodium chloride mixed with beet juice (e.g., GeoMelt®); and magnesium chloride that was mixed with a distillation byproduct (e.g., Magic Salt). They applied each treatment at three concentrations that span a range commonly found in lakes, ponds, and wetlands:  50, 100, and 200 milligrams per liter of choloride. A control treatment used tap water, which contains 25 milligrams per liter of chloride.

After 30 days, they assessed the changes in the mesocosms. Microbes digested some of the sugars in the beet juice and distillation byproducts, causing an immediate drop in dissolved oxygen levels. Microbes also likely transformed unusable phosphorous in the organic additives into usable phosphorus, which increased algal growth. The increase in algal growth tripled the abundance of zooplankton which, in a natural setting, could increase the growth and abundance of fish and other zooplankton predators.

“Organic additives are like adding food to the lake. They are broken down into nutrients and organisms eat them,” said Matthew Schuler, a postdoctoral research associate and first author of the paper. “The additives in GeoMelt and Magic Salt act as a fertilizer for aquatic systems.”

“Our research shows that these chemicals can cause changes to the food web, but we can’t tell you whether that is desirable or not,” Relyea said. “More algae means more zooplankton and more fish, and the angler might like that. But more algae also means turbid water, and a homeowner may not like that. It’s a subjective public question.”

The Jefferson Project is enabled by the vision of The New Polytechnic, an emerging paradigm for higher education which recognizes that global challenges and opportunities are so great they cannot be adequately addressed by even the most talented person working alone. Rensselaer serves as a crossroads for collaboration — working with partners across disciplines, sectors, and geographic regions — to address complex global challenges, using the most advanced tools and technologies, many of which are developed at Rensselaer. Research at Rensselaer addresses some of the world’s most pressing technological challenges — from energy security and sustainable development to biotechnology and human health. The New Polytechnic is transformative in the global impact of research, in its innovative pedagogy, and in the lives of students at Rensselaer.