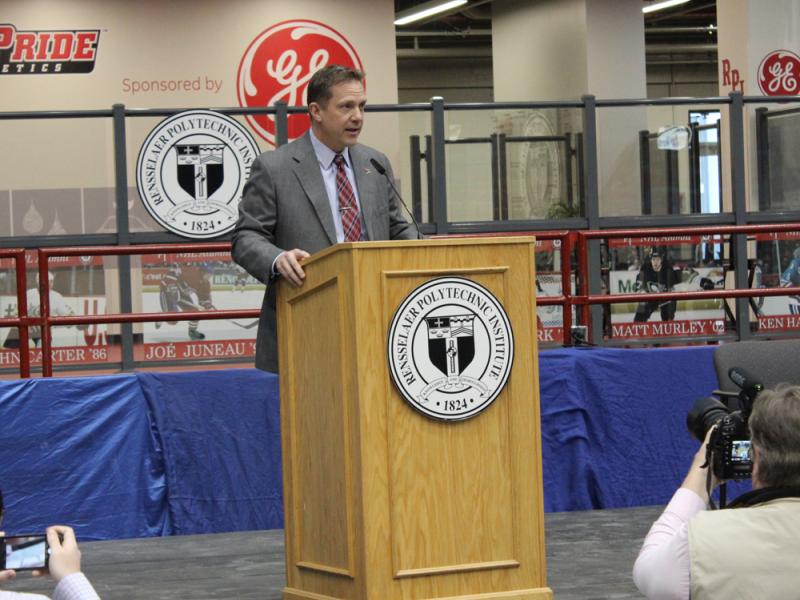 Smith has led the Canisius College men’s ice hockey team for 12 seasons. At Canisius, he built the Men’s Ice Hockey program to a number 25 ranking among Division I NCAA Men’s Ice Hockey teams. Smith guided Canisius to a 21-11-7 record this season and was named the Atlantic Hockey Coach of the Year after winning the program’s first regular-season title. He led the Golden Griffins to three straight trips to Atlantic Hockey Championship weekend for the first time in school history, including consecutive appearances in the title game and the team’s first crown in 2013. The program has also received national attention with its graduates having unprecedented success at the professional level.

“Our national search for a new men’s ice hockey coach produced a strong pool of candidates, and it is clear that Dave Smith is the right person to lead the Rensselaer hockey program as we anticipate even higher levels of success in the future,” said President Shirley Ann Jackson. “I am confident that he will continue the proud tradition of Rensselaer men’s hockey and add to our prominence as a leading program. He has a thorough understanding of the importance of the education that our young people are here to acquire, and the importance of developing the mind, body, and spirit. We look forward to seeing his success with our team.”

“We are excited to add Dave to our RPI Athletics family,” said Lee McElroy, director of athletics at Rensselaer. “He brings a strong coaching and mentoring resume and he is eager to help us to continue to the raise the bar for our hockey program.”

“I am honored to be joining RPI and a hockey program with an incredibly rich history and strong traditions,” Smith said. “Every single person I have met is passionate about their Rensselaer experience and the RPI hockey team.”

During the 2012-13 campaign, Smith guided Canisius to the program’s first conference title with a 7-2 victory in the Atlantic Hockey Championship against Mercyhurst and the team’s first appearance in the NCAA Division I Tournament. The Griffs also finished the campaign ranked 19th in the final USCHO.com national poll, marking the program’s highest finish in the national rankings.

Canisius nearly duplicated the remarkable feat the following two seasons, advancing to the 2014 Atlantic Hockey title game after again eliminating the top two seeds in the conference tournament before earning a second-place finish in 2015 – matching the program’s best regular-season finish – and making a third-straight trip to the semifinals.

In his first 11 seasons leading the Canisius program, he guided numerous student-athletes to success both on and off the ice, including a total of 33 team members who have signed professional contracts after playing under Smith at Canisius, and two who inked NHL deals. Overall, 10 Griffs earned all-conference accolades in the past eight seasons a total of 13 times. During the 2014-15 campaign, a school-record three Griffs earned All-Atlantic Hockey honors.

Canisius student-athletes were consistently ranked among the best in the country under Smith’s leadership. Goaltender Tony Capobianco led all players in Division I with 1,256 saves during the 2012-13 campaign, which also ranks as the 12th-best total in NCAA history and the most since the 1988-89 season. Cory Conacher ranked second nationally in points per game during the 2009-10 campaign after recording a program-record 53 points.

Smith became Canisius’ head coach on April 15, 2005, after serving the previous three seasons as the associate coach and recruiting coordinator at fellow Atlantic Hockey member Mercyhurst College. He also spent time as an assistant coach with Bowling Green and Miami University in Ohio.

The Arthur, Ontario, native was also instrumental in guiding Mercyhurst to two league championships and two NCAA Division I Tournament appearances in his three seasons with the Lakers.

Smith graduated from The Ohio State University in 1992 with a bachelor’s degree in journalism/public relations and was a four-year letter-winner for the Buckeyes. Smith finished his career at Ohio State with 140 points, ranking 14th all-time. He was selected as team captain as a junior and chosen as the team’s MVP as a senior, while leading the Buckeyes with 41 assists and 63 points.

After graduating from Ohio State, Smith spent six seasons in professional hockey, including five full seasons in the American Hockey League (AHL) and the International Hockey League (IHL) and a brief period in the East Coast Hockey League (ECHL). He was under contract with the New York Rangers in 1994-95. Smith has spent his summers coaching young players and adults as a director and head instructor at numerous camps across the United States and Canada.

In addition to his responsibilities at Canisius, Smith serves on the board of directors at College Hockey Inc.

Smith and his wife, Dr. Susan Smith, a faculty member at the University of Buffalo, have two daughters, Ellis and Kylie.

Rensselaer has embraced the vision of The New Polytechnic, an emerging paradigm for teaching, learning, and research. The foundation for this vision is the recognition that global challenges and opportunities are so great they cannot be adequately addressed by even the most talented person working alone. The New Polytechnic is transformative in the global impact of research, in its innovative pedagogy, and in the lives of students at Rensselaer.