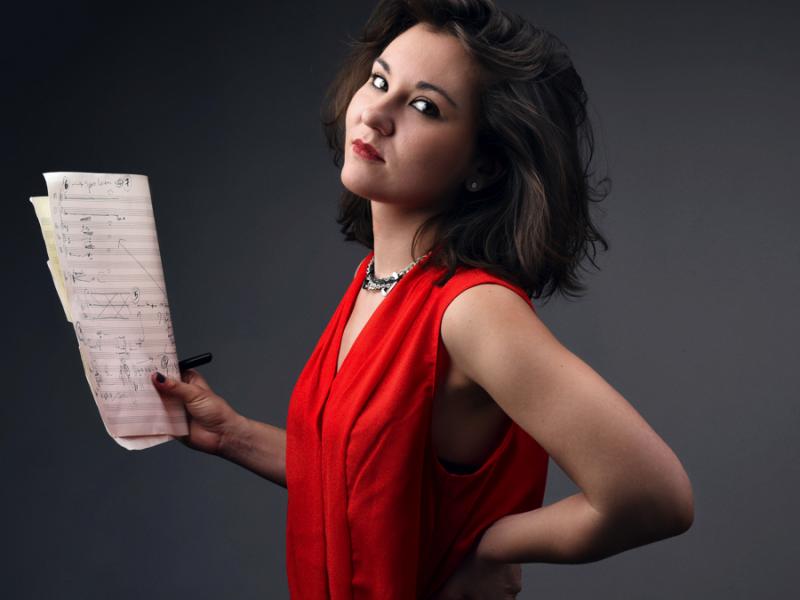 New York-based composer Nina C. Young writes music characterized by an acute sensitivity to tone and color, manifested in aural images of vibrant, arresting immediacy, according to her artist’s bio. Young serves as assistant professor in the Department of the Arts in the School of Humanities, Arts, and Social Sciences at Rensselaer Polytechnic Institute. Image courtesy of Nina C. Young

Troy, N.Y. — New York-based composer Nina C. Young writes music characterized by an acute sensitivity to tone and color, manifested in aural images of vibrant, arresting immediacy, according to her artist’s bio. Young serves as assistant professor in the Department of the Arts in the School of Humanities, Arts, and Social Sciences at Rensselaer Polytechnic Institute. Since joining Rensselaer last fall, she has been working several projects, including the development of a new multimedia opera, “Making Tellus: Sketches of a Cosmogram for the Anthropocene.” Young will share highlights regarding the new piece during AXIS: The Art_X Interdisciplinary Seminar planned on April 25.

Young is the recipient of the 2015-16 Frederick A. Juilliard/Walter Damrosch Rome Prize in Musical Composition from the American Academy in Rome, a Koussevitzky Commission from the Library of Congress, a Charles Ives Scholarship from the American Academy of Arts and Letters, the Jacob Druckman Prize, and the Salvatore Martirano Memorial Award.  Her music has also been recognized through commissions and awards from institutions such as the American Composers Forum, Broadcast Music Inc. (BMI), the Jerome Foundation, the International Alliance for Women in Music (IAWM), and the Society of Electro-Acoustic Music in the United States (SEAMUS).

Young received a Doctor of Musical Arts degree from Columbia University, where she was an active participant at the Columbia Computer Music Center. She received a master’s degree in music composition from McGill University, and a bachelor’s degree from the Massachusetts Institute of Technology (MIT) in ocean engineering and music; in addition, she held a research assistantship at the MIT Media Lab.

“The School of Humanities, Arts, and Social Sciences responds to the world’s greatest challenges with agenda-setting research on human societies, institutions, minds, arts, and cultures,” said Mary Simoni, dean of the School of Humanities, Arts, and Social Sciences. “We are thrilled to have Professor Nina Young as one of our newest faculty members. Her prolific compositional oeuvres span the breadth of genres emblematic of music at Rensselaer. Professor Young adds a new voice to a chorus of dedicated faculty who are committed to excellence in our music program.”

Today, Young’s interests are headed in the direction of collaborative, multidisciplinary works. For example, earlier this year, while in Rome, Young worked with choreographer Miro Magloire and the New Chamber Ballet to develop a site-specific piece, Temenos, around the intersections of movement, architecture, and sound at the Tempietto Del Bramante. This past fall, Young worked with women’s rights activist and performance artist Erin Helfert to develop the sound design and 8-channel sonic installation in New York City’s Federal Hall of RITE OF PASSAGE – a performance piece that explores death, liminality, and rebirth as inspired by Helfert’s five-year rape trial in a Moroccan court.

In addition, in May, the American Composers Underground will premiere Out of whose womb came the ice –commissioned by the Jerome Foundation – a work for baritone, orchestra, electronics, and generative video commenting on the ill-fated Ernest Shackleton Trans-Antarctic Expedition.

Young’s works have been presented by leading cultural institutions such as Carnegie Hall, the National Gallery, the Whitney, Los Angeles Philharmonic’s Next on the Grand, and the St. Paul Chamber Orchestra Liquid Music Series. She also currently serves as co-artistic director of the New York-based new music sinfonietta Ensemble Échappé.

“It is an honor to join the RPI community, which uniquely integrates cutting-edge artistic and scholarly practice within the context of a research polytechnic,” said Young. “I see this as a ripe environment in which I can expand upon my artistic and research interests in creating a dialogue between music/sound, electronic media, movement/dance, environmental science, and architectural spaces through collaborations with faculty and students across departments and schools.”

Young’s research is enabled by the vision of The New Polytechnic, an emerging paradigm for higher education which recognizes that global challenges and opportunities are so great they cannot be adequately addressed by even the most talented person working alone. Rensselaer serves as a crossroads for collaboration — working with partners across disciplines, sectors, and geographic regions — to address complex global challenges, using the most advanced tools and technologies, many of which are developed at Rensselaer. Research at Rensselaer addresses some of the world’s most pressing technological challenges — from energy security and sustainable development to biotechnology and human health. The New Polytechnic is transformative in the global impact of research, in its innovative pedagogy, and in the lives of students at Rensselaer.