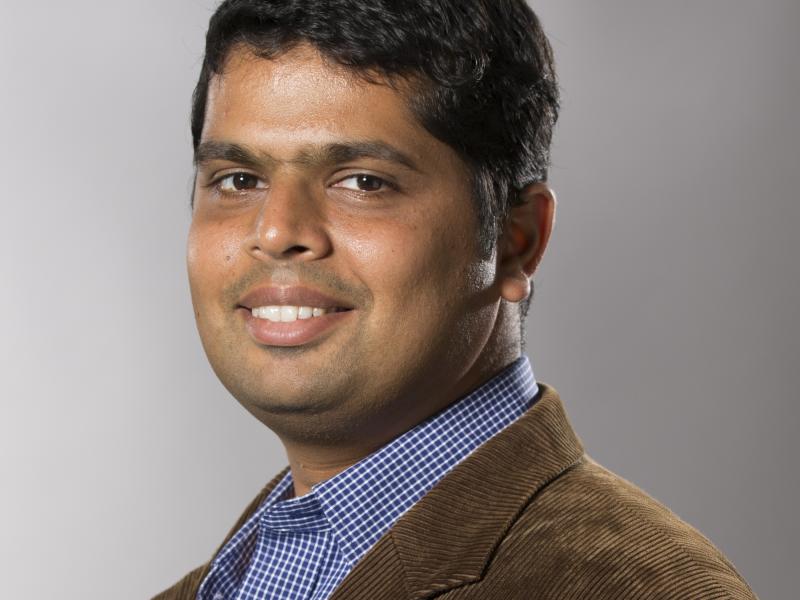 Chaitanya Ullal, assistant professor of materials science and engineering at Rensselaer Polytechnic Institute, has won a Faculty Early Career Development Award (CAREER) from the National Science Foundation (NSF). He will use the five-year, $556,091 award to study the structure of hydrogels – jelly-like materials that have some of the properties of solids, but are largely composed of water.

The CAREER Award is given to faculty members near the beginning of their academic careers and is one of the most competitive and prestigious awards given by the NSF to junior faculty. The award places emphasis on high-quality research as well as novel educational initiatives.

Hydrogels are found in familiar products like contact lenses and disposable diapers. With their physical resemblance to living tissues, they offer promise in many other areas including tissue engineering and drug delivery. But to achieve that promise, researchers must have a greater understanding of their structure, and how structure affects their mechanical properties. Hydrogels hold water within a tangled networks of polymers – long chains of molecules – that are chemically connected to one another at intervals called “crosslinks.” But while researchers rely on models that depict a uniform distribution of crosslinks, experiments have shown a more complex distribution.

The grant will allow Ullal to use sophisticated imaging techniques, including Stimulated Depletion Emissions Microscopy (STED), an optical microscopy technique with resolution on a scale of tens of nanometers, to characterize the structure of hydrogels.

“We can’t fully explain the mechanics of hydrogels with the assumptions that we have now,” said Ullal, an expert in organization of polymers at the nanoscale. “With accurate descriptions of how hydrogels are structured, we will be able to develop new materials with desirable properties and put these remarkable materials to use.”

“Research at the intersection of engineering and life sciences is being revolutionized by fundamental understanding of materials,” said Shekhar Garde, dean of the School of Engineering. “’Chaitanya’s research is pushing the frontiers of research on biomaterials using advanced microscopy. We are proud to have him as a colleague and look forward to the results and impact of his work.”

The resolution of conventional optical microscopes is limited to about 250 nanometers, insufficient for viewing crosslinks at the molecular scale. Light simply cannot be focused more tightly, a limitation known as the diffraction barrier. STED microscopy circumvents the diffraction barrier by using two wavelengths of light to illuminate an area of dye-linked molecules smaller than 250 nanometers. The technique was developed in the 1990s, and Ullal worked as a postdoctoral researcher in the laboratory of Stefan W. Hell, who was awarded the 2014 Nobel Prize in Chemistry for its invention.

“We’re in a strong position to unravel some of the mysteries of how crosslinks are distributed in space under a variety of circumstances – hydrogels created at varying temperatures and with varying materials – and that’s an exciting prospect,” Ullal said.

The CAREER Award is titled “resolving and mapping of nanoscale heterogeneities in polymer gels and determination of their impact on properties.” The grant includes an educational component, a particular interest of Ullal, who serves on the board of director’s for Iridescent Learning, a nonprofit devoted to STEM education for underserved girls, children, and their families. Outreach through the grant could include hands-on learning activities, mentoring, and videos, such as the video on “making metamaterials” Iridescent created with Ullal.

In 2016, Ullal was a recipient of the American Chemical Society Petroleum Research Fund New Investigator Award. Also in 2016, he received an NSF Division of Chemistry Macromolecular, Supramolecular and Nanochemistry grant for “Photochromic Switching for Nanostructured Polymer Gels,” in collaboration with Edward F. Palermo, assistant professor of materials science and engineering at Rensselaer, and a fellow NSF CAREER Award winner.

Ullal’s research is enabled by the vision of The New Polytechnic, an emerging paradigm for higher education which recognizes that global challenges and opportunities are so great they cannot be adequately addressed by even the most talented person working alone. Rensselaer serves as a crossroads for collaboration — working with partners across disciplines, sectors, and geographic regions — to address complex global challenges, using the most advanced tools and technologies, many of which are developed at Rensselaer. Research at Rensselaer addresses some of the world’s most pressing technological challenges — from energy security and sustainable development to biotechnology and human health. The New Polytechnic is transformative in the global impact of research, in its innovative pedagogy, and in the lives of students at Rensselaer.