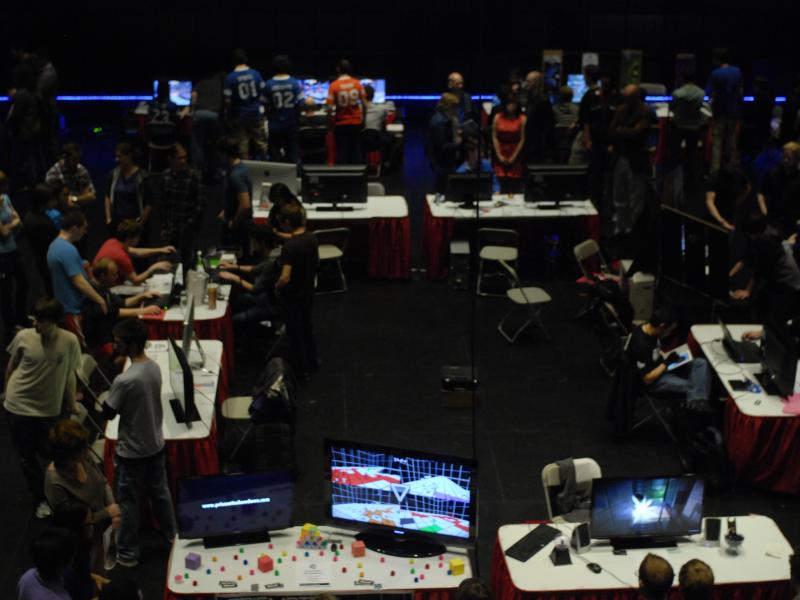 GameFest, an annual tradition at Rensselaer Polytechnic Institute, celebrates the creativity and innovation in digital games, with a student showcase and competition, music performances, and presentations from veteran game designers, critics, scholars, and indie developers. The event will be held Friday, April 28 to Saturday, April 29 in downtown Troy and on the Rensselaer campus. It is open to the campus and local community. The 2017 theme, “Intersecting Orbits,” explores the intersections of games, art, and science.

Troy, N.Y. — GameFest, an annual tradition at Rensselaer Polytechnic Institute, celebrates the creativity and innovation in digital games, with a student showcase and competition, music performances, and presentations from veteran game designers, critics, scholars, and indie developers. The event will be held Friday, April 28 to Saturday, April 29 in downtown Troy and on the Rensselaer campus. It is open to the campus and local community. The 2017 theme, “Intersecting Orbits,” explores the intersections of games, art, and science.

In connection with Troy Night Out, the two-day event kicks off on April 28 with the GameFest expo, which will be held for the first time at the Tech Valley Center of Gravity located at 30 Third Street in downtown Troy, along with the Troy Innovation Garage located at 24 Fourth Street. The event will be held from 5 to 9 p.m.

“There is tremendous talent and creativity in games, here in the Capital Region and throughout New York state,” said Ben Chang, associate professor and director of the Games and Simulation Arts and Sciences (GSAS) program in School of Humanities, Arts, and Social Sciences at Rensselaer. “University researchers are discovering new ways of using games in education and health care, nonprofits are teaching game design to kids and building creative communities, and game developers of all kinds are constantly reinventing the medium. GameFest is a showcase of creativity in games and electronic media — a public event to talk about how games and simulation are evolving, and we are honored to once again host the event.”

GameFest is presented by the Games and Simulation Arts and Sciences Program and the School of Humanities, Arts and Social Sciences, and is made possible in part by a grant from the State of New York’s Empire State Development agency.

Over the past 14 years, GameFest has grown from a small showcase of a handful of games designed by Rensselaer video students to include dozens of games designed by students from colleges and universities throughout the Northeast. On April 29, the program will feature a keynote speaker, live game play, and a panel discussion featuring Rensselaer alumni and alumnae who are working in the games industry. This event will be held on the Rensselaer campus, in the Russell Sage Laboratory building that houses the School of Humanities, Arts and Social Sciences, room 3303.

The April 29 program will open with an eSports Competition – a professional competitive gaming competition – that will be live-streamed on Twitch.TV, running from noon to 1:30 p.m. Rensselaer’s eSports community will present an Overwatch scrimmage between rival teams from Rensselaer and the University of Albany. The 6v6 competition will feature live commentary by Electronic Gaming Federation certified announcers and will be streamed live from the VAST Lab to the Sage Auditorium.

Rensselaer graduate Jonathan Mintz ’04, senior designer at Harmonix, will deliver the keynote talk focused on the theme, “The Space Between Galaxies: Charting New Frontiers in Game Design.” In the vast universe of possible games, it can be challenging for developers to travel beyond established genres and mechanics. Using the development of DropMix as a case study, Mintz will share methods for defining creative goals, rapidly iterating to refine one’s core experience, and user testing to guide players into one’s game.

Following the keynote talk, a panel discussion will take place, beginning at 2:30 p.m. Along with Mintz, panelists include several notable Rensselaer alumni and alumnae from the GSAS program, which was established in 2007. Panelists include: Jennifer Ash ’08, lead UI/UX Designer at Bungie Studios; Zach Barth ’08, founder of Zachtronics; and Ian Stead ’04, lead game designer at 1st Playable Productions.

GameFest event will culminate with an awards ceremony from 3:30 to 4 p.m., hosted by Velan Studios, a new development studio founded by brothers Guha and Karthik Bala ’97. No strangers to the gaming industry, in 1991, the Bala brothers formed their first game development company, Vicarious Visions. Over the next 25 years they took the studio from out of their basement and to the forefront of AAA game development by developing and growing multi-billion dollar franchises such as Skylanders, Guitar Hero, Tony Hawk, and more. The brothers sold Vicarious Visions to Activision in 2005 and continued to lead the studio as it grew and made many critically acclaimed, successful games..

Today, video games represent one of the largest and fastest growing entertainment industries in the world, and the Capital Region is positioned to be a growing location in digital gaming. In 2016, the Empire State Development announced three new Digital Gaming Hubs in New York state at Rensselaer, New York University, and Rochester Institute of Technology. The Digital Gaming Hubs, selected through a request for proposals process, will receive $150,000 each per year for three years. The new Digital Gaming Hubs will encourage students and businesses to create new innovative technologies.

The Digital Gaming Hub brings together partners in the game development community, including the nonprofit organizations Tech Valley Game Space and Games in Education, local studios including 1st Playable Productions and Vicarious Visions, the Paul J. ’69 and Kathleen M. Severino Center for Technological Entrepreneurship in the Lally School of Management at Rensselaer,and the Emerging Ventures Ecosystem at Rensselaer.

For more information and to view a complete GameFest 2017 schedule, visit: http://gamefest.rpi.edu.