Commencement 2017: Service to Their Country 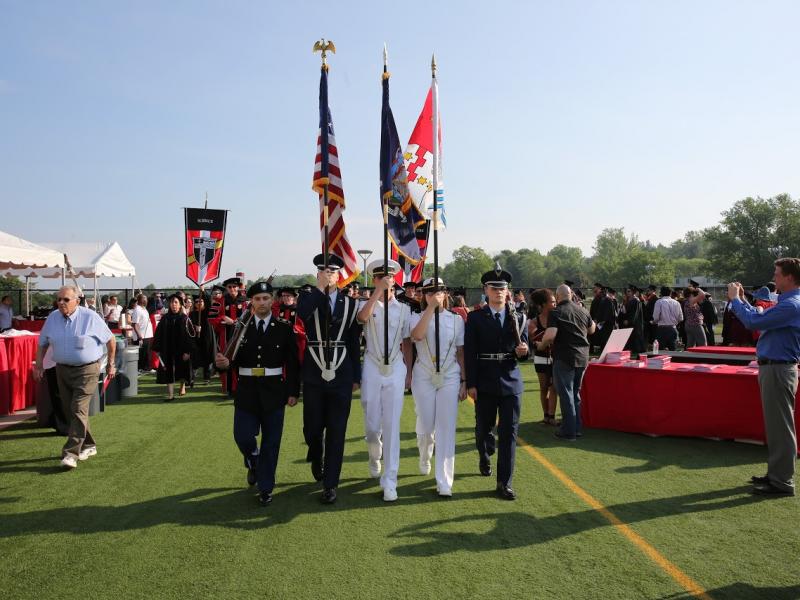 Space travel is heating up—and so are rocket fuel emissions. These companies are developing cleaner alternatives to protect earth first
Why Do Fossil Fuels Have So Much Carbon Stored in Them?
Rensselaer Creates Course Program Focused on Training in Micro and Nanofabrication Cleanroom Technology
RPI President’s Holiday Concert Set for December 11
Lighting Up Troy
May 15, 2017

Commencement 2017: Service to Their Country

Troy, N.Y. – The Reserve Officers’ Training Corps (ROTC) programs at Rensselaer Polytechnic Institute are elective programs for students who desire commissions in the United States Armed Forces. This year, 33 students will be graduating from the ROTC program and starting active military service as officers with the Army, Navy, Marine Corps, and Air Force.

Commissioning signifies the beginning of a student’s active military service. Each student will take an oath of office in his or her respective branch of service in one of three commissioning ceremonies scheduled during the month of May, prior to the 211th Commencement ceremony of the Institute that will be held on Saturday, May 20, beginning at 8:15 a.m. in the East Campus Athletic Village Stadium.

In the Army, the Mohawk Battalion operates as the Army’s only commissioning source for colleges and universities throughout the Capital Region. Fifteen of the graduates who will be commissioned as second lieutenants are from Rensselaer. Of the 15 total commissionees, 10 will go into active duty, four will go into the National Guard, and one will go into the Reserve. Assignment locations for the new lieutenants include: Fort Benning, GA; Fort Bragg, NC; Fort Drum, NY; Fort Hood, Texas; Fort Story, VA; and Korea. The commissioning ceremony will be held on Saturday, May 20, at 2 p.m. at the University at Albany Alumni House. Congressman Paul Tonko will deliver the keynote address.

From Naval ROTC, 15 students will be commissioned—14 as ensigns and one as a second lieutenant—into active duty in the United States Navy or Marine Corps. Future career paths for those commissioned include: five surface warfare officers, five submarine officers, one Naval Flight Officer, one Nuclear Surface Warfare Officer, two Naval Reactor Engineers, and one Marine Corps officer. The commissioning ceremony will be held on Friday, May 19, from 9 to 11 a.m. on the Rensselaer campus in the Curtis R. Priem Experimental Media and Performing Arts Center (EMPAC) Theater. Rear Admiral Jeffrey A. Harley, president of the Naval War College, will deliver the keynote address and Oath of Office.

In the Air Force, three graduates will become pilots, air battle managers, and developmental engineers. The commissioning ceremony will take place at 3 p.m. on Friday, May 19, in the Rensselaer Alumni Sports and Recreation Center, room 209. Lt Col John E. Bales will deliver the keynote address. Lt. Col. John E. Bales serves as professor of aerospace studies and the commanding officer of the Air Force Reserve Officer Training Corps Detachment 550 at Rensselaer. He is responsible for recruiting, educating, training, and developing officer candidates into the United States Air Force.

While at Rensselaer, the students engaged in the Reserve Officers’ Training Corps exemplify the vision of The New Polytechnic is an emerging paradigm for teaching, learning, and research at Rensselaer. The foundation for this vision is the recognition that global challenges and opportunities are so great they cannot be adequately addressed by even the most talented person working alone. Rensselaer serves as a crossroads for collaboration—working with partners across disciplines, sectors, and geographic regions—to address complex global challenges, using the most advanced tools and technologies, many of which are developed at Rensselaer. Research at Rensselaer addresses some of the world’s most pressing technological challenges—from energy security and sustainable development to biotechnology and human health. The New Polytechnic is transformative in the global impact of research, in its innovative pedagogy, and in the lives of students at Rensselaer.