Meet the Rensselaer Polytechnic Institute Class of 2017: An Overview of the 211th Commencement 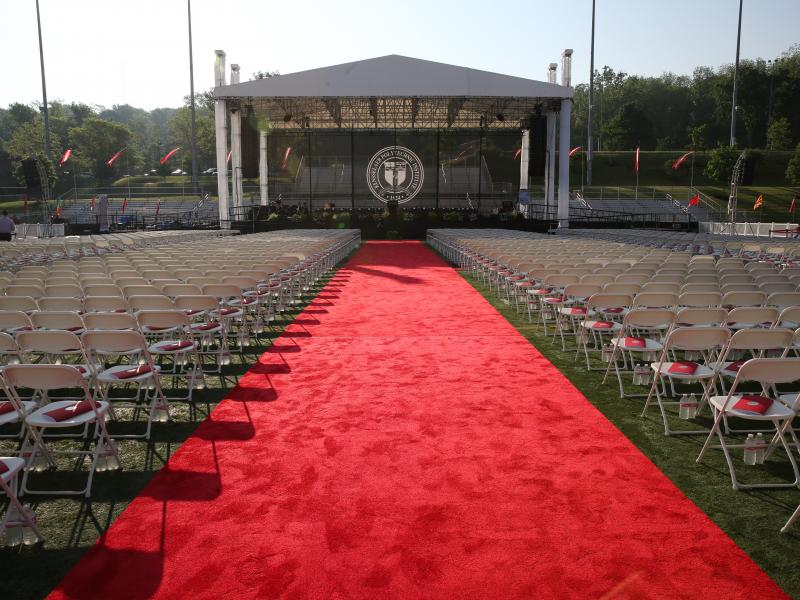 Meet the Rensselaer Polytechnic Institute Class of 2017: An Overview of the 211th Commencement

Rensselaer Set to Host 211th Commencement Ceremony on May 20

Troy, N.Y. – This spring,1,841 students will receive degrees from Rensselaer Polytechnic Institute, the oldest technological research university in the United States, on Saturday, May 20, beginning at 8:15 a.m. in the East Campus Athletic Village (ECAV) stadium. They represent the next generation of leaders, engineers, scientists, entrepreneurs, patent holders, game designers, architects, and innovators, in fields ranging from engineering to architecture, fine arts to science, game design to information technology, and business to active military service.

During the 211th Commencement Ceremony, Rensselaer will award a total of 2,025 degrees. They include: 122 doctoral degrees, 456 master’s degrees, and 1,447 bachelor’s degrees. Some graduates have earned more than one degree. This year, more than 10,000 graduates and visitors are expected to attend the ceremony.

In 2017, graduating students come from more than 44 states, in addition to New York. The Class of 2017 contains graduates from 24 other nations, including Bangladesh, Canada, China, Greece, India, Indonesia, Spain, Switzerland, Taiwan, Turkey and Vietnam.

All in the Family

The Rensselaer degree is well-known throughout the world as a symbol of technological excellence and achievement. Rensselaer alumni and alumnae are leaders. They are collaborative, able, and smart. This year, 102 members of the Class of 2017 are Rensselaer “legacies,” students with relatives who attended the university.

The Commencement Speaker Is…

The Honorable Ernest J. Moniz will deliver the 2017 Commencement Address. Moniz served as the 13th United States Secretary of Energy from 2013 to January 2017. As Secretary, he advanced energy technology innovation, nuclear security and strategic stability, cutting-edge capabilities for the American scientific research community, and environmental stewardship. He strengthened the Department of Energy (DOE) strategic partnership with its 17 national laboratories and with the Department of Defense and the broader national security establishment. Specific accomplishments included producing analytically based energy policy proposals that attracted bipartisan support and implementing legislation, leading an international initiative that placed energy science and technology innovation at the center of the global response to climate change, and negotiating alongside the Secretary of State the historic Iran nuclear agreement.

Rensselaer President Shirley Ann Jackson also will address members of the Class of 2017. The Honorable Shirley Ann Jackson, Ph.D., is the 18th president of Rensselaer Polytechnic Institute, where she has led an extraordinary transformation since 1999. Described by Time Magazine as “perhaps the ultimate role model for women in science,” President Jackson has held senior leadership positions in academia, government, industry, and research. A theoretical physicist, President Jackson holds an S.B. in Physics, and a Ph.D. in Theoretical Elementary Particle Physics, both from MIT. In 2007, describing her as “a national treasure,” the National Science Board selected her as the recipient of the Vannevar Bush Award for “a lifetime of achievements in scientific research, public policy, and senior statesman-like contributions to public policy.” In 2016, United States President Barack Obama awarded her the National Medal of Science, the nation’s highest honor in science and engineering.

Class Presidents Kyle Neumann and Michael Gardner also will address the graduates. Neumann, a nuclear engineering major with a minor in psychology, was an active member of the Class of 2017 Council and the Community Advocates, a group of students focused on fostering diversity on and off of the Rensselaer campus. Additionally, Neumann was a resident assistant in the Quadrangle, a member of the National Residence Hall Honorary, the Relay for Life Advocacy chairman, Hall Council Chair for the Quadrangle, part of the 125th Celebration of the Rensselaer Union Committee, a member of the Newman Community group, and a member of White Key. Following graduation, the Bosque Farms, New Mexico, native will pursue a master of science in nuclear engineering at the University of Pittsburgh, while working full time as a nuclear engineer for Bechtel.

Gardner, a dual major in computer and systems engineering and computer science, served as a member of the Class Council during his time at Rensselaer, and was a member of RPISEC, a security club, and the Rensselaer Center for Open Source (RCOS). The Findlay, Ohio, native was also an active member of the RPI Players, a student-led theater group, and served as director of the Delta Xi cast Alpha Psi Omega Theater honor society, as well as member of the Computing and Information Disciplines honor society, Upsilon Pi Epsilon. Following graduation, Gardner plans to continue his education at Rensselaer by pursing a master’s of science in technology commercialization and entrepreneurship.

The Honorable Ernest J. Moniz will receive an Honorary Doctor of Science degree at the ceremony. He will join the Honorable Roger W. Ferguson Jr., president and chief executive officer of TIAA, the leading provider of retirement services in the academic, research, medical, and cultural fields and a Fortune 100 financial services organization, who will recieve an Honorary Doctor of Laws degree. The honorands, who are leaders and influencers with diverse perspectives on global challenges, will participate in the graduation ceremonies and also receive honorary degrees.

Ferguson is the former vice chairman of the Board of Governors of the U.S. Federal Reserve System. He represented the Federal Reserve on several international policy groups and served on key Federal Reserve System committees, including Payment System Oversight, Reserve Bank Operations, and Supervision and Regulation. As the only Governor in Washington, D.C., on 9/11, he led the Fed’s initial response to the terrorist attacks, taking actions that kept the U.S. financial system functioning while reassuring the global financial community that the U.S. economy would not be paralyzed.

Each year at Commencement, the graduating class presents the university with a unique and spirited gift. This year, the Class of 2017 has established the Student Relief Fund, a distinctive opportunity to support future students who face financial hardship that threatens their academic progress during their time at Rensselaer. The fund is intended to provide a one-time grant to matriculated undergraduate students in immediate need. To date, through class ring sales and Class of 2017 fundraising efforts, the fund currently has over $12,000 and will be available for use at the start of the fall 2017 semester.

Past class gifts have included scholarships for incoming freshmen to attend Navigating Rensselaer & Beyond overnight trips, the development of a sandstone seating area, new building and directional signage, and landscaping improvements in front of ’87 Gym, the creation of a “green roof” on the Rensselaer Union Bookstore, a clock in Hassan Quad, the stone Rensselaer sign at the corner of Sage Avenue and 15th Street, and a lounge space in the Game Room area of the Rensselaer Union, among others.

To celebrate the 45th anniversary of the David M. Darrin ’40 Counseling Award, which will be presented during Commencement, 10 faculty members have been selected to receive the award. This award was established by David M. Darrin ’40 to recognize a faculty member who has made an unusual contribution in the counseling of undergraduate students. The selection of the award recipient is made by Phalanx, Rensselaer’s student leadership honorary society.

While at Rensselaer, the undergraduate and graduate student experience exemplifies the vision of The New Polytechnic is an emerging paradigm for teaching, learning, and research at Rensselaer. The foundation for this vision is the recognition that global challenges and opportunities are so great they cannot be adequately addressed by even the most talented person working alone. Rensselaer serves as a crossroads for collaboration—working with partners across disciplines, sectors, and geographic regions—to address complex global challenges, using the most advanced tools and technologies, many of which are developed at Rensselaer. Research at Rensselaer addresses some of the world’s most pressing technological challenges—from energy security and sustainable development to biotechnology and human health. The New Polytechnic is transformative in the global impact of research, in its innovative pedagogy, and in the lives of students at Rensselaer.

Please Note: All numbers and facts include Troy campus students and degrees issued in August and December 2016. This information does not include the Rensselaer Hartford campus. All of the numbers cited are estimated as of May 15, 2017, and are subject to change up until Commencement.