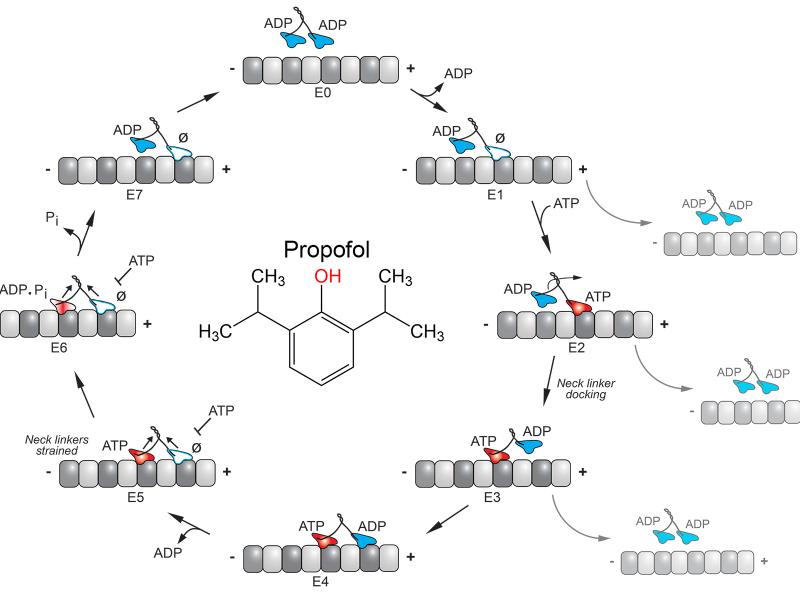 The widely used anesthetic propofol is considered a safe and effective drug for use in general anesthesia. But how propofol induces unconsciousness is poorly understood. Research published in the Proceedings of the National Academy of Science, and supported by the National Institutes of Health, identifies a previously unknown mechanism of the drug that may help to explain its outcomes, knowledge that could lead to safer anesthetics.

Researchers at Rensselaer Polytechnic Institute and the University of Pennsylvania found that propofol inhibits the activity of kinesins, a class of motor proteins that provides critical services by ferrying cellular cargos from one place to another within a cell. Kinesins travel along a highly complex and coordinated system of “railroad tracks,” called microtubules. Although the microtubule tracks themselves have been considered a potential target of anesthetics, the kinesins that travel along them never have. Yet a decrease in kinesin function could explain many propofol effects.

An anesthetic might be expected to impact speed of kinesins, slowing their progress along the microtubule.  Surprisingly, this study revealed that the anesthetic did not influence speed of the kinesins. Instead, their ability was impaired as the kinesin motors “derailed” – or simply detached from the microtubule. The researchers discovered that the presence of the anesthetic decreases the distance the kinesins are able to travel by 40 to 60 percent, which would ultimately hinder their cargo-carrying capabilities.

“Propofol impedes the ability of kinesins to deliver their cargo – necessary components like ion channels, mitochondria, and other organelles. This certainly diminishes cell function, and may be contributing to the outcomes of the anesthesia,” said Susan Gilbert, professor and head of the Department of Biological Sciences at Rensselaer and a leading expert on kinesins. Gilbert is a member of the Rensselaer Center for Biotechnology and Interdisciplinary Studies.

This article is the product of a synergistic collaboration between a basic scientist (Gilbert) and a clinical scientist,

Dr. Roderic G. Eckenhoff, in the Department of Anesthesiology and Critical Care at the University of Pennsylvania Perelman School of Medicine.

Much of the focus on propofol has been on its interaction with the GABAA receptor, an ion channel that inhibits neurotransmission when activated. But Eckenhoff said that the effects of proprofol on the GABAA receptor aren’t sufficient to account for all the outcomes of propofol.

“A decrease in kinesin function could explain many propofol effects. More than simply documenting this derailing effect, this work provides keen insight into the potential underlying mechanisms, opening a pathway toward improvements in the anesthetic molecules,” said Eckenhoff.

Gilbert and Eckenhoff were joined in the research, “Common General Anesthetic Propofol Impairs Kinesin Processivity,” by Brandon M. Bensel, Stephanie Guzik-Lendrum, and Erin M. Masucci, at Rensselaer, and Kellie A. Woll at University of Pennsylvania. The paper can be found using the doi: 10.1073/pnas.1701482114 and was funded with support from the National Institute of General Medical Sciences (P01 GM55876 to RGE and R37-GM054141 to SPG).

In 2013, Susan Gilbert was awarded a National Advisory General Medical Sciences Council National Institutes of Health (NIH) Method to Extend Research in Time (MERIT) Award to support her research. The award is a recognition of the high quality of her research contributions over time. The original award was extended in 2017 with an additional $2.5 million in support. The overall goal of Gilbert’s MERIT research is to understand how the mechanochemistry of kinesin motors underlies their ability to promote intracellular transport, generation of cell polarity, and remodeling of the microtubule cytoskeleton for cell division, cell differentiation, and morphogenesis during human development. Her work could shed light on diverse pathologies that have been linked to defects in kinesins, including cancer, ciliopathies, neuropathies, and birth defects.

Gilbert’s research is an example of The New Polytechnic, an emerging paradigm for higher education which recognizes that global challenges and opportunities are so great they cannot be adequately addressed by even the most talented person working alone. Rensselaer serves as a crossroads for collaboration — working with partners across disciplines, sectors, and geographic regions — to address complex global challenges, using the most advanced tools and technologies, many of which are developed at Rensselaer. Research at Rensselaer addresses some of the world’s most pressing technological challenges — from energy security and sustainable development to biotechnology and human health. The New Polytechnic is transformative in the global impact of research, in its innovative pedagogy, and in the lives of students at Rensselaer.