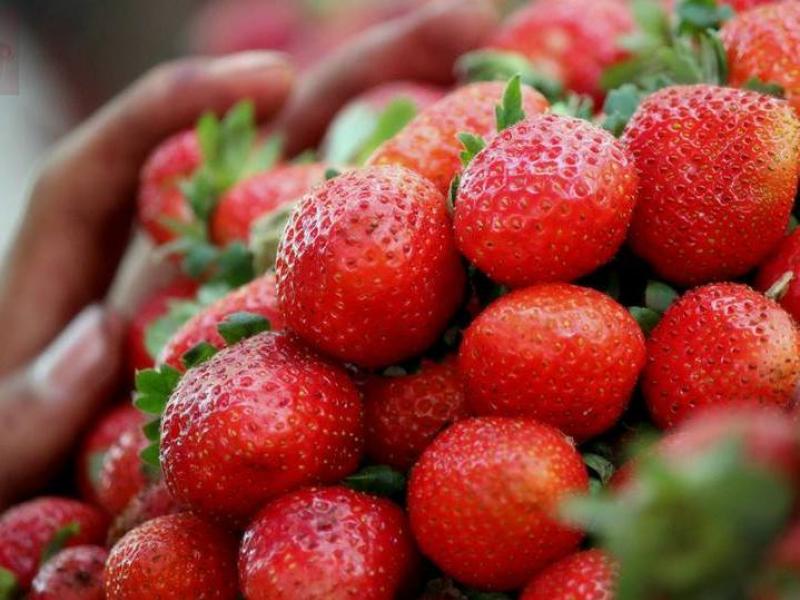 Rensselaer Researchers Make Virus-Fighting Face Masks
Are Immigrant Workers Impacted By Turmoil In Their Home Countries?
Think Working From Home Won’t Hurt Your Career? Don’t Be So Sure
New Theory of Decision-Making Seeks To Explain Why Humans Don’t Make Optimal Choices
The delivery market is coming down from its pandemic highs
June 29, 2017

Nature makes the vibrant pigments manufacturers want for foods and cosmetics, but getting them from plants to the products we buy is so difficult that many manufacturers rely on artificial colors. Now, researchers at Rensselaer Polytechnic Institute have shown that four strains of E. coli bacteria working together can convert sugar into the natural red anthocyanin pigment found in strawberries, opening the door to economical natural colors for industrial applications.

The research marks the first biosynthesis method using four strains of bacteria to manufacture a compound in a single step, said Mattheos Koffas, a professor of chemical and biological engineering at Rensselaer, and member of the Center for Biotechnology and Interdisciplinary Studies. Results appear in mBio, a publication of the American Society for Microbiology.

“For the first time, we are able to completely synthesize anthocyanins in a biological system,” said Koffas. “We feed the bacteria glucose and they do the rest. This demonstrates that an inexpensive technology can produce these valuable compounds.”

Manufacturers are increasingly interested in natural colors, a shift founded in research documenting the health hazards of artificial colors for foods and cosmetics. Natural pigments found in plants such as anthocyanins, carotenoids, or lycopene produce indisputably safe colors. Anthocyanins exist in a far broader spectrum than other pigment classes –

producing all colors except green — and are responsible for natural color found in foods like blueberries, raspberries, black rice, and the hues of autumn leaves.

But producing anthocyanins for industrial use is challenging: plant-derived pigments require costly processing and produce inconsistent results; and because anthocyanin molecules are complex, chemists have been unable to synthesize them.

Koffas’ lab has been investigating a production method of anthocyanins involving genetic engineering since 2005. Sixteen genes govern the production of anthocyanin in plants. But transferring those genes, and the molecular pathway they trigger, from a plant to a bacteria is not a straightforward process, said J. Andrew Jones, first author of the paper and a doctoral student at the time the research was conducted. To adapt the molecular pathway from a plant to the bacteria, the Koffas lab pieced together genes from bacteria, yeast, and six different varieties of plants.

In early research, the Koffas lab introduced the entire molecular pathway it had assembled into a single strain of E.coli bacteria. But the pathway proved too long for the cell, which tended to use the additional genes to produce its own metabolites instead of anthocyanins, said Jones, currently a member of the faculty at Miami University of Ohio.

The current research divides the entire pathway among four different strains of bacteria, modified to assemble anthocyanin in stages. Researchers divided the pathway into “modules” that produced intermediates that easily diffuse out of the bacterial cell.  When combined in a single flask, the first bacteria ingest sugar and produce “intermediate” compounds, phenylpropanoic acids, which are ingested by the second bacteria, which produces a second intermediate, and so forth until the fourth strain produces anthocyanin.

In the next stage of work, researchers will optimize each stage of the process. Each of the four strains was chosen based on its ability to produce its assigned intermediate; however, some segments produce more than others, and the final output is modest, producing milligrams per liter of anthocyanin. Production will have to approach of hundreds of milligrams per liter to be a commercially viable approach.

“I have no doubt that production of anthocyanins from a recombinant microbial host is the only viable method for making these compounds in an economically sustainable manner,” said Koffas. “Complete Biosynthesis of Anthocyanins Using E. coli Polycultures” can be found using DOI doi: 10.1128/mBio.00621-17.

Koffas is the Dorothy and Fred Chau ‘71 Career Development Constellation Professor in Biocatalysis and Metabolic Engineering. His research is enabled by the vision of The New Polytechnic, an emerging paradigm for higher education which recognizes that global challenges and opportunities are so great they cannot be adequately addressed by even the most talented person working alone. Rensselaer serves as a crossroads for collaboration — working with partners across disciplines, sectors, and geographic regions — to address complex global challenges, using the most advanced tools and technologies, many of which are developed at Rensselaer. Research at Rensselaer addresses some of the world’s most pressing technological challenges — from energy security and sustainable development to biotechnology and human health. The New Polytechnic is transformative in the global impact of research, in its innovative pedagogy, and in the lives of students at Rensselaer.