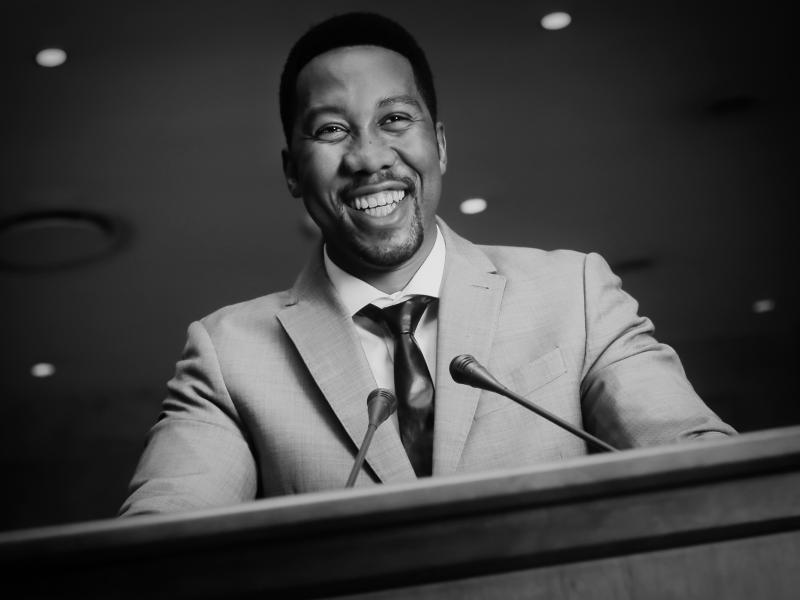 Nelson Mandela’s legacy lives on as his grandson, Ndaba Mandela continues to keep its beacon of hope bright, fueling its fiery message that one person can make a difference. He will visit the Rensselaer campus on Tuesday, September 19, as the featured guest to kick off the Rensselaer Union Speakers Forum program. Image courtesy of American Program Bureau.

Grandson of Nelson Mandela, co-founder and chairman of Africa Rising Foundation, to speak at Rensselaer Sept. 19

Troy, N.Y. — South African activist and former president Nelson Mandela had a “long walk to freedom,” yet his footprints still remain. Following in the footsteps of his beloved and iconic grandfather, Ndaba Mandela has taken the torch – and run with it. Today, Nelson Mandela’s legacy lives on as Ndaba Mandela continues to keep its beacon of hope bright, fueling its fiery message that one person can make a difference. He will visit the Rensselaer campus on Tuesday, September 19, as the featured guest to kick off the Rensselaer Union Speakers Forum program. The lecture will take place in the Curtis R. Priem Experimental Media and Performing Arts Center (EMPAC) Theater beginning at 7:30 p.m. The event is open to members of the Rensselaer Polytechnic Institute campus and local community.

Recently named one of the “28 Men of Change” by BET, Ndaba Mandela will deliver a presentation titled “The Village Idiom: Empowering Youth Through Education, Interconnectivity, and Employment,” where he will address the critical issue of how education and interconnectivity leads to employment in all areas – from the largest universities to the smallest local schools. He also educates audiences on how to literally apply the tools it takes to realize his grandfather’s eternal message of the importance of education in one’s life, and also how to create the necessary solid support system of teachers, parents, civic leaders, and mentors that it takes to succeed.

“In focusing on one of the Rensselaer themes that addresses ‘The Unity Underlying Diversity,’ the lecture invites us to explore how the contributions of diverse scientists, engineers, artists, and thinkers can solve complex problems,” said Cameron McLean, director of student activities in the Rensselaer Union. “In collaboration with the Rensselaer Union Speakers Forum, the annual lecture creates an extraordinary learning opportunity for us to prepare students to further develop the intellectual agility, multicultural sophistication, and global awareness that will enable them to change the world.”

Today, Ndaba Mandela is showing the world, through his actions and orations, that his grandfather’s voice and message of freedom still carries and rings true. Currently, he is organizing the 95th celebration of Nelson Mandela Day and was also instrumental in creating the International Day of Happiness at the United Nations. He continues to keep Nelson Mandela on the world’s mind.

During the presentation, Ndaba Mandela will entertain and inspire audiences with tales only he could tell. With pride and presence, he speaks passionately about Africa, its people, and its future – which he says is looking brighter than ever. This is good news, not only for the continent, but also for corporations looking to get in on the ground floor of a steadily rising nation, embracing its vast potential and natural resources, according to Mandela. He is the co-founder and co-chairman of the Africa Rising Foundation, an organization dedicated to promoting a positive image of Africa around the world and to increasing its potential for growth in the areas of education, employment, and international corporate alliances for profit and partnership.

Ndaba Mandela remains true to his inspiring grandfather’s message. “I carry with me the values of my grandfather,” he said. “I am an African, and I know what it means to be African, and I’m proud of it.” He also regales audiences with quips and quotes from his famed, father-like teacher and inspiration.

Ndaba Mandela lets audiences peek through the keyholes of the Presidential Palace and proudly shares lessons of love learned from his grandfather. “I saw him interact with kings and presidents, and with our household cook,” he said. “He treated everyone the same. This was his key value.”

Launched in 1998, the Rensselaer Union Speakers Forum is a lecture program that brings a broad range of speakers to campus. Invited guests deliver remarks on topics that include high adventure, education, personal experience, entertainment, social science, the arts, entrepreneurship, culture, athletics, current events, politics, and recreation, among others.

The Rensselaer Union Speakers Forum exemplifies The New Polytechnic, an emerging paradigm for teaching, learning, and research at Rensselaer. The New Polytechnic emphasizes and supports collaboration across disciplines, sectors, and regions to address the great global challenges of our day, using the most advanced tools and technologies, many of which are developed at Rensselaer.

For more information, contact the Rensselaer Union at (518) 276-6505 or email activities@rpi.edu.