Rensselaer Ranks in Top 10 Undergrad Schools in the U.S. for Game Design and Animation 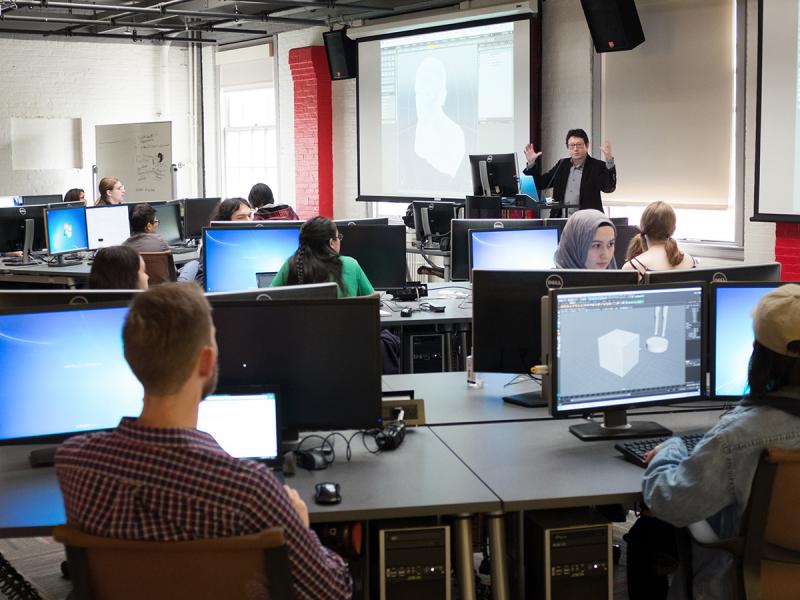 Video games represent one of the largest and fastest-growing entertainment industries in the world, and the Capital Region is becoming an influential location in digital gaming. The GSAS program was established in 2007, with the first class graduating in 2011. Rensselaer students enrolled in the GSAS program study fields as diverse as electronic arts, artificial intelligence and cognitive science, digital graphics, software development, psychology, and human-computer interaction, and computer graphics in communication and the arts. Photo credit: Rensselaer Polytechnic Institute

Rensselaer Offers Scientists and Engineers a New Pathway to Entrepreneurship
EMPAC is back in-person
EMPAC Re-Opens to Public with Ambitious Fall Season of World Premieres, Award-Winning Original Films, and Artists’ Talks
Men in Same-Sex Couples Suffer Earnings Decline When Preventative HIV-Medicine Is Available
Stress, not laziness, is behind procrastination. Here are 3 ways to ‘retrain your brain’
July 18, 2017

Rensselaer Ranks in Top 10 Undergrad Schools in the U.S. for Game Design and Animation

Troy, N.Y. — When it comes to studying game design and animation, the Rensselaer Polytechnic Institute Games and Simulation Arts and Sciences program (GSAS) keeps hitting the mark. The program was recently ranked No. 10 nationally on the Animation Career Review list of top game design programs in the United States. Among East Coast colleges and universities, Rensselaer came in at No. 5 out of 25 programs, and placed seventh on the list for private schools and colleges and third among programs offered in New York state.

“Rensselaer is a uniquely rich environment for games studies, and our GSAS degree program provides an undergraduate experience like few others available anywhere in the country,” said Mary Simoni, dean of the School of Humanities, Arts, and Social Sciences (HASS), which houses GSAS. “Our program draws on RPI’s Computer Science, Cognitive Science, Arts, Communication, and Media, and Science and Technology Studies departments—a combination of resources few other games programs can even claim, let alone match. GSAS emphasizes a deep theoretical foundation along with collaborative, interdisciplinary teamwork, which is how games are actually created. This equal emphasis on theory and practice means that students graduate fully prepared to work in the games industry, and the program does indeed have a considerable success rate in post-graduate employment.”

“There is tremendous talent and creativity in games at Rensselaer, in Troy and around the Capital Region, and throughout New York state,” said Ben Chang, associate professor and director of the GSAS. “Researchers are discovering new ways of using games in education and health care, nonprofits are teaching game design to kids and building creative communities, and game developers of all kinds are constantly reinventing the medium. There is no question that games is a growing, dynamic and exciting field, and GSAS is definitely a leader.”

“Interactive technology is changing how young people learn, and assisting training efforts in physical fitness, biomedicine, and so much more,” Simoni added. “Rensselaer continues to produce graduates who are shaping the future of gaming, and we are pleased to once again be recognized among the top institutions in the country for studying video game design and animation.”

Video games represent one of the largest and fastest-growing entertainment industries in the world, and the Capital Region is becoming an influential location in digital gaming. In 2016, the Empire State Development announced three new Digital Gaming Hubs in New York state at Rensselaer, New York University, and Rochester Institute of Technology. The Digital Gaming Hubs, selected through a request for proposals process, will receive $150,000 each per year for three years. The new Digital Gaming Hubs will encourage students and businesses to create new innovative technologies.

The Digital Gaming Hub brings together partners in the game development community, including the nonprofit organizations Tech Valley Game Space and Games in Education, local studios including 1st Playable Productions and Vicarious Visions, the Paul J. ’69 and Kathleen M. Severino Center for Technological Entrepreneurship in the Lally School of Management at Rensselaer, and the Emerging Ventures Ecosystem at Rensselaer.

Animation Career Review started publishing regional and national rankings in 2012, in response to myriad emails from aspiring animators and game designers asking for the best schools in the U.S., a given state, or a particular area of the country. In preparing the 2017 rankings, the organization considered hundreds of schools in the United States that offer programs geared toward game design or animation.  Criteria include academic reputation, admission selectivity, depth and breadth of the program and faculty, value as it relates to tuition and indebtedness, and geographic location.

The GSAS program was established in 2007, with the first class graduating in 2011. Rensselaer students enrolled in the GSAS program study fields as diverse as electronic arts, artificial intelligence and cognitive science, digital graphics, software development, psychology, and human-computer interaction, and computer graphics in communication and the arts.

For information regarding the 2017 animation ranking, visit: http://www.animationcareerreview.com/articles/top-50-animation-schools-and-colleges-us-%E2%80%93-2017