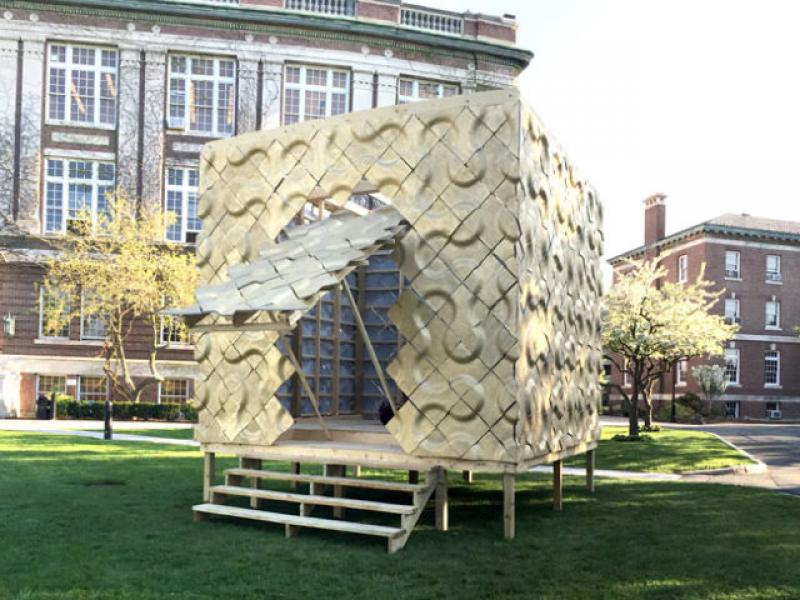 Two projects designed and built by students in the School of Architecture at Rensselaer Polytechnic Institute have been recognized among “The Best Student Design-Build Projects Worldwide 2017” by the architectural news website ArchDaily.

From hundreds of submissions, ArchDaily selected the 34 best pavilions, installations, and experimental structures created by architecture students from around the world. Rensselaer was the only university represented among the 34 projects to field two award-winning structures.

“However important it is to always dream the future of our built environment, there’s nothing more inspiring in the profession of architecture than seeing ideas move into action,” said Evan Douglis, dean of the School of Architecture. “The students and faculty associated with these projects have devised ingenious ways to reassess common material in pursuit of a sustainable world. Their creative efforts combining art, science, and technology have certainly not gone unnoticed, given the impressive accolades they have garnished from a jury of their peers on an international stage.”

The Upcycling Agrowaste Pavilion is a custom-built shed composed of recycled cellulose panels that are made using flour and starch as a binding agent. The panels were designed using Truchet tiling patterns and employing historical Ghanaian adinkra symbols to describe the shed’s social and environmental program. The pavilion was designed as an inexpensive, easily constructed prototype for the Chale Wote Street Art Festival in Accra, Ghana. The festival is aimed at using dynamic public programming and creative arts to, among other goals, influence a new model for urban regeneration.

The Chale Wote Pavilion, called a “fascinating shading structure” by ArchDaily, is made almost entirely of agricultural byproducts. The panels of the shelter are made from coconut husk fibers, a common waste product in Ghana, and soy binders. The ropelike coir fiber extracted from a coconut husk can be pressed with the coconut’s pith to form a biocomposite that is as strong as plywood. The panels were bolted together to form a kiosk to display at the Chale Wote festival.

Ten students took part in the project under faculty leaders Demetrios Comodromos, professor of practice at the Rensselaer Center for Architecture Science and Ecology (CASE), Josh Draper, lecturer at CASE, Mae-Ling Lokko, and Anna Dyson, professor of architecture and director of CASE.

These projects epitomize the goals of The New Polytechnic, a new paradigm for learning and research at Rensselaer that addresses complex global challenges, the need for interdisciplinarity and true collaboration, and the use of the latest tools and technologies, many of which are developed at Rensselaer.

This is the third year ArchDaily has recognized the best student design-build projects by recent graduates from around the world. Founded in 2008, ArchDaily covers architecture news, competitions, and projects and is visited by millions of architects each month.