Cultivating What It Means To Be Human 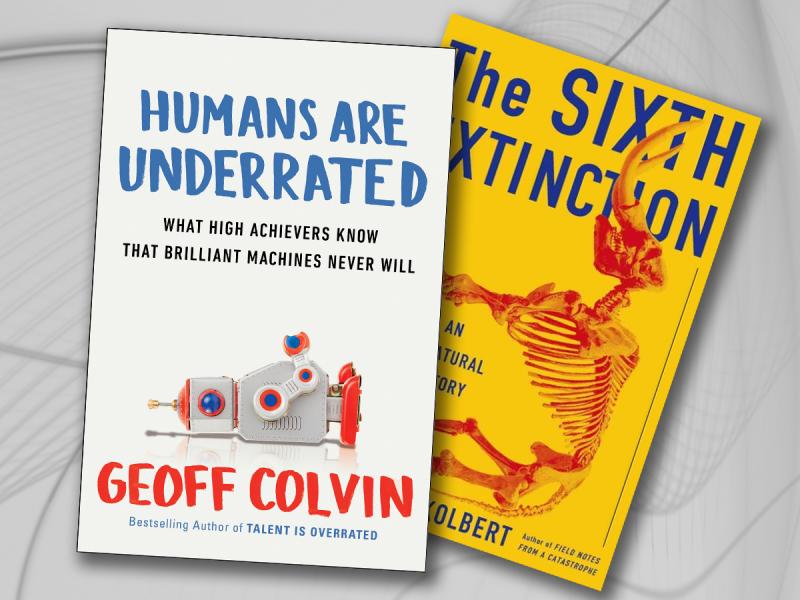 Cultivating What It Means To Be Human

Faculty from the Rensselaer Polytechnic Institute School of Humanities, Arts, and Social Sciences (HASS), in partnership with Student Life, have selected two titles for the 2017-18 Community Read. The selected books are Humans are Underrated: What High Achievers Know That Brilliant Machines Never Will by Geoff Colvin, and The Sixth Extinction: An Unnatural History by Elizabeth Kolbert.

The tradition of a Community Read for Rensselaer students was established in 2015, using the theme of the President’s Commencement Colloquy as a concept for exploration by the entire Rensselaer community in the following academic year. The theme of the 2017 colloquy, on which the current book selections were based, was “Criticality, Incisiveness, and Creativity.”

“These inspiring and provocative books will be used in many of our HASS Inquiry courses―courses designed to challenge first-year students to question the essential nature of some of the biggest problems facing humanity from a multitude of perspectives,” says Mary Simoni, dean of HASS. “We aim to deeply cultivate what it means to be human…to be curious, empathic, passionate, and creative.”

The HASS Inquiry curriculum brings together first-year students from all five schools within Rensselaer for an intensive set of courses designed to make them think about their roles as global citizens in a global community as they embark on their Rensselaer education. These courses focus on fundamental social, ethical, philosophical, and economic questions that intersect all areas of study.

HASS faculty who teach classes in the HASS Inquiry curriculum were instrumental in selecting the books, and will incorporate them into their classes.

Bram van Heuveln, lecturer in the Department of Cognitive Science, teaches Minds and Machines, one of the HASS Inquiry courses which, he says, are based on themes or “big questions” and cut across disciplines.

“The ‘big theme’ of Minds and Machines is artificial intelligence: Is it possible, and if so, is it desirable?” says van Heuveln. “We’ll take a look at whether it is possible for machines to be just as intelligent as humans are, and even if not, the effect that AI has on us and society at large.”

While robots-taking-over-the-world scenarios are a bit far-fetched, says van Heuveln, the effect that AI has on our daily life is undeniable, from smartphones and smart search engines to smart cars and smart houses. And, as the book Humans are Underrated points out, AI technology has the potential to take over many of the jobs of humans.

“We’ll use the book to explore the question: What is it that humans bring to the table; what is it that makes humans valuable, and that humans are good at, and machines are (at least as of yet) not?” says van Heuveln. “And I like the positivity of that message: It puts the focus on humans, not machines.”

The book aligns with the theme of Criticality, Incisiveness, and Creativity, says van Heuveln, in that “AI is a big topic that requires us to make some critical decisions as to how we want to move forward with it. It presents us with one of those ‘great decision-moments in time’!”

Daniel Thero, lecturer in cognitive science, will use Humans are Underrated, which he calls engaging and thought-provoking, in his Philosophy, Technology, and the Human Future course.

“One of the main goals of the course is to help students develop the ability to critically and intelligently evaluate predictions―often contradictory predictions―about what opportunities and challenges will be engendered by emerging technologies over, say, the next 50 years,” says Thero. “Therefore, for each of the books that we will be reading, including Humans are Underrated, students will consider the conclusions that the author draws and the reasonableness of the evidence put forth in support of the conclusions.”

Community Read and HASS Inquiry courses are an integral part of The New Polytechnic, a new paradigm for learning and research. Rensselaer leads by using advanced technologies to unite a multiplicity of disciplines and perspectives, in order to take on large, multifaceted challenges to become transformative in three fundamental ways: in the global impact of our research, in our innovative pedagogy, and in the lives of our students.