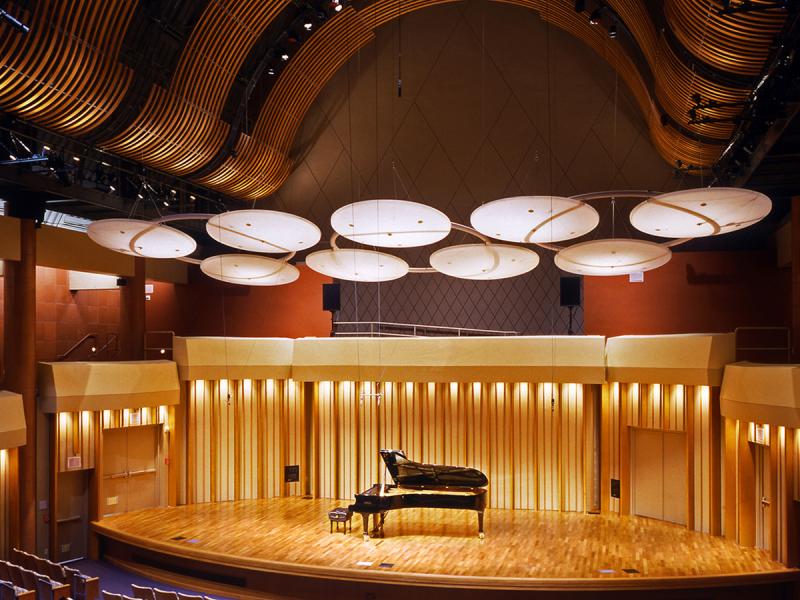 As the world has grown louder, research scientists have gained extensive knowledge of how to improve the acoustics of interior spaces and block out the noise that hampers workplace productivity, patient care, and learning.

Rensselaer Polytechnic Institute has made a significant contribution, with a world-renowned graduate program in architectural acoustics that teaches practitioners and scholars to design spaces with optimal sound quality. Established nearly 20 years ago in the Rensselaer School of Architecture, the program is among the most comprehensive in North America, at a time when boosting sound quality is becoming urgent.

“The need to understand acoustics is more profound than ever,” said Ning Xiang, the program’s director. “As we have more sound and understand how to control and improve the sound, we are making a real difference in society.”

A researcher, educator, and inventor, Xiang is one of just 16 individuals worldwide to win the Wallace Clement Sabine Medal, the field’s top honor. Now, he has edited Architectural Acoustics Handbook (504 pages, J. Ross Publishing), which culls the theory and applications from some of the leading minds in architectural acoustics.

The handbook, which includes information not found elsewhere, is geared for use in research, undergraduate and graduate study, and application by acoustics consultants, industry engineers and recording professionals.

“This reference will play a fundamental role in the sustainable progress of architectural acoustics research and practical applications,” according to J. Ross Publishing. “World-renowned experts in the field from both the research and consulting communities contributed to the 15 chapters covering a wide range of sub-fields including computational modeling, noise, vibration controls, and environmental acoustics in the built environment and around buildings.”

Xiang earned his Ph.D. in electrical engineering at the Ruhr-Universität Bochum in Bochum, Germany. After working in industry in Germany, he came to the University of Mississippi as research scientist at the university’s National Center for Physical Acoustics and an associate professor of electrical engineering.

He has published three previous books and more than 300 articles, and has served as an associate editor of the Journal of the Acoustical Society of America (JASA) for more than a decade. Xiang is also on the journal’s editorial board. He received the Wallace Clement Sabine Medal in 2014.

Also among his achievements, Xiang has helped advance a new generation of micro-perforated absorbers that can be easily disinfected. He and his research partners have invented wallboards incorporating light-weight, low-cost materials that reduce sound transmission loss.

The architectural acoustics program he heads at Rensselaer has educated more than 130 specialists who collaborate on the world’s great concert halls, libraries, airports, corporate headquarters, and university venues. Graduates also help boost healthcare, education, and workplace productivity by assuring that people in these settings hear the critical information—and not the unwelcome, distracting noises.

“In architectural acoustics we are dealing with two sides: the beauty of the sound and the ugly of the sound,” noted Xiang, a full professor in the program. “Back in the 1960s, noise level averaged 60 or 70 decibels. Now one finds easily 90 or even 100. You have to get rid of the ugly side of the sound if you’re near a highway or an industrial operation, where a lot of activities are.”

Programs like architectural acoustics exemplify the Rensselaer vision of The New Polytechnic, an emerging paradigm for higher education which recognizes that global challenges and opportunities are so great they cannot be adequately addressed by even the most talented person working alone. Rensselaer serves as a crossroads for collaboration—working with partners across disciplines, sectors, and geographic regions—to address complex global challenges, using the most advanced tools and technologies, many of which are developed at Rensselaer.