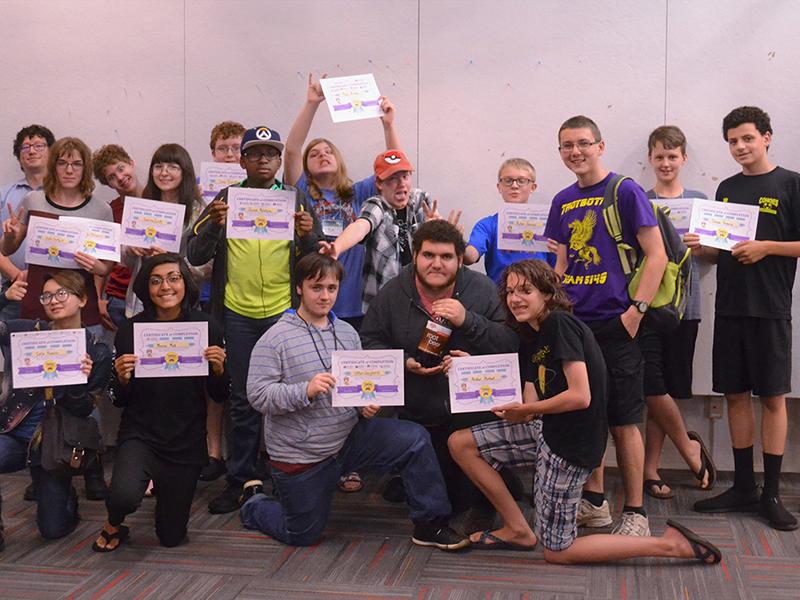 Area teens got a taste of STEM education at Rensselaer recently.

Local teens got a taste of STEM education

According to organizers, the Teen Game Workshop is a free, weeklong workshop for local teens who may not have the resources to explore STEM (science, technology, engineering and math) fields. “By the end of the week these teens will gain confidence and excitement in seeing this as a potential career available for them to pursue in upstate New York,” said Tobi Saulnier, CEO of 1st Playable Productions and president of Games in Education.

This year’s workshop included 14 new students and nine returning students, according to Amanda Kirk ’06, lead designer and producer at 1st Playable Productions, one of the workshop’s organizers. “Most of them have never created a game before,” she said.

“Every year I’m amazed to see what these students are able to create in the course of the week, and how excited they are to learn about technology,” Kirk said. “Many of these students haven never programmed before. This year, we had a student who doesn’t even have a PC in their home and they were able to use their creativity to build a project that expresses themselves. We hope by being able to provide this program, we can get these students excited about pursuing STEM careers.”

Besides learning how to program and use various art tools, the students learned how to seek solutions on their own, express their thoughts in a narrative story, work with others on a team, and to share knowledge and persevere when met with technical challenges.

“The Capital Region and New York state are home to tremendous talent in game design, and the students just starting out today will be the ones bringing new visions and stories to the future of the industry,” said Ben Chang, associate professor and director of the Game and Simulation Arts and Sciences program at Rensselaer.

Video games represent one of the largest and fastest growing entertainment industries in the world, and the Capital Region is positioned to be a growing location in digital gaming. The Digital Gaming Hub brings together partners in the game development community, including the nonprofit organizations Tech Valley Game Space and Games in Education; local studios including 1st Playable Productions, Vicarious Visions, Velan Studios, and Warner Brothers; the Paul J. ’69 and Kathleen M. Severino Center for Technological Entrepreneurship in the Lally School of Management; and the Emerging Ventures Ecosystem at Rensselaer.

Games in Education, based in Troy, is a nonprofit volunteer organization with the goal of creating opportunities for educators and students. “We seek to enable and empower forward-thinking educators as well as inspire local youth to engage in STEM,” the organization states.

Students studying at Rensselaer will experience The New Polytechnic, a new paradigm for learning and research. Rensselaer leads by using advanced technologies to unite a multiplicity of disciplines and perspectives, in order to take on large, multifaceted challenges to become transformative in three fundamental ways: in the global impact of our research, in our innovative pedagogy, and in the lives of our students.