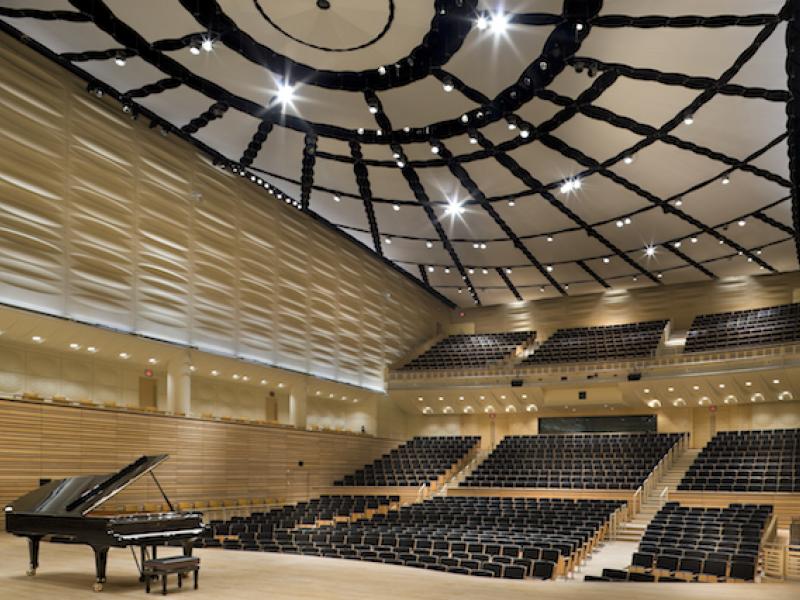 Tours will highlight new technologies and the center’s programmatic capabilities

Throughout the fall 2017 season, the Curtis R. Priem Experimental Media and Performing Arts Center (EMPAC) at Rensselaer Polytechnic Institute will offer a series of free building tours on the first Saturday of each month. Led by a different member of the EMPAC team, each tour will focus on a different thematic or technological area, from audio, to stage technologies, to the programmatic capabilities of the center as a whole. Tours begin at 2PM in the EMPAC 7th-floor lobby and are open to the public.

On September 2, EMPAC director Johannes Goebel will start the series with a special overview of the center. Before Goebel became the director of EMPAC, he worked extensively with the architects and engineers to design and build virtually every feature of the space. On this tour, Goebel will take visitors through the EMPAC building with an eye and ear to the specific “human-scale” functions he strove to achieve in taking the project from a lofty vision to one of the world’s most advanced media centers.

On October 7, lead audio engineer Todd Vos will lead a tour focused on the center’s audio infrastructure, acoustics, and recording capabilities. From the specialized sound panels in Studio 1, to the frequency-calibrated Nomex ceiling fabric in the Concert Hall, and into the miles of fiber optic cable that connect each of EMPAC’s performance spaces to its recording studios, audiophiles will take a deep-dive into EMPAC’s acoustic design and capabilities.

On November 11, director of stage technologies Geoff Abbas will take visitors on a behind-the-scenes tour of the spaces and technologies behind EMPAC’s performance venues. Each of EMPAC’s performance spaces were designed as a blank canvas, endlessly customizable according to the needs of EMPAC’s diverse productions. Abbas will show all the nuts and bolts that make the spaces work, including the robotic rigging system, the Concert Hall ceiling grid, and the Theater’s 80-foot fly tower.

Finally on December 2, EMPAC curators Argeo Ascani, Ashley Ferro-Murray, and Victoria Brooks will lead a tour from the programmatic perspective of how the spaces can be optimized to create boundary-pushing work in the fields of dance, theater, music, and time-based visual arts. If the EMPAC building is the center’s hardware, the curatorial team is its software operating system. This tour will highlight EMPAC’s media infrastructure in the context of contemporary performing arts and discuss the unique advantages resident artists have in working at the center.

The Curtis R. Priem Experimental Media and Performing Arts Center (EMPAC) at Rensselaer Polytechnic Institute is where the arts, sciences, and technology interact with and influence each other by using the same facilities and technologies, and by breathing the same air. EMPAC hosts artists and researchers to produce and present new work in a building designed with sophisticated architectural and technical infrastructure. Four exceptional venues and studios enable audiences, artists, and researchers to inquire, experiment, develop, and experience the ever-changing relationship between ourselves, technology, and the worlds we create around us. EMPAC is an icon of the New Polytechnic, a new paradigm for cross-disciplinary research and learning at Rensselaer, the nation’s oldest technological research university.