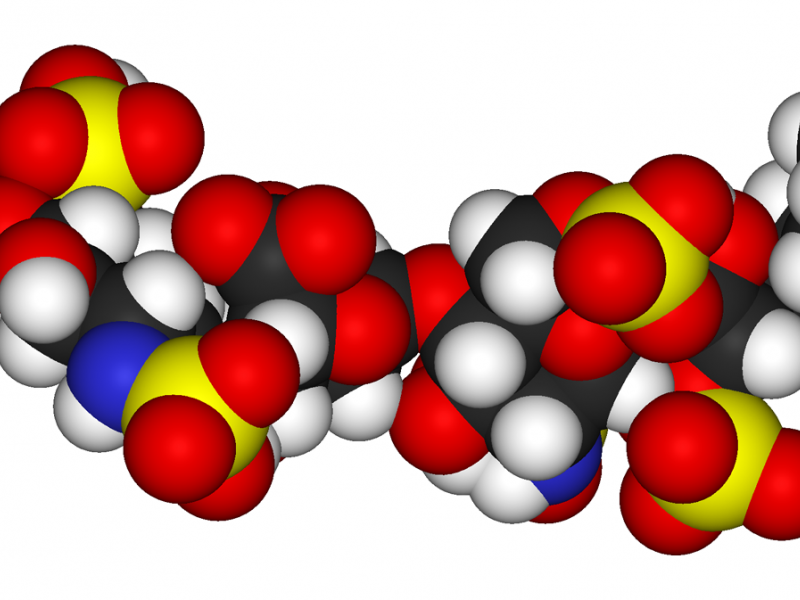 A synthetic version of low molecular weight heparin is poised for clinical trials and development as a drug for patients with clotting disorders, and those undergoing procedures such as kidney dialysis, heart bypass surgery, stent implantation, and knee and hip replacement. Naturally derived low molecular weight heparin is extracted from pig intestines and the synthetic version offers several advantages: a synthesized version poses less risk for contamination in manufacturing, and, unlike its natural counterpart, it has been engineered to be safer for patients with poor kidney function and reversible in cases of complication.

Results of preclinical studies, which demonstrate the compounds’ safety and efficacy in animal models of deep vein thrombosis and sickle cell disease, appear in the journal Science Translational Medicine today.

“This is at the cusp of clinical trials and commercial use. There is no question about the science; we have proven that this is a safer, more effective alternative to its natural counterpart, and what now determines its success or failure is the marketplace,” said Robert Linhardt, the Ann and John H. Broadbent Jr. ’59 Senior Constellation Professor of Biocatalysis and Metabolic Engineering at Rensselaer Polytechnic Institute (RPI), a member of the Rensselaer Center for Biotechnology and Interdisciplinary Studies (CBIS), and one of the inventors of the new drug.

Animal pharmacology and toxicology studies involved researchers at Loyola University Medical Center, the University of North Carolina at Chapel Hill (UNC), and Rensselaer. Researchers at Rensselaer – which was involved in all previous stages of developing and manufacturing the compound – assisted in synthesis by providing structural analysis of compounds manufactured at UNC, and tested at UNC and Loyola.

“We streamlined and altered the molecular structure of low molecular weight heparin in ways that vastly improve the function of the drug, and make it more cost-effective to synthesize, but also make it more of a challenge to analyze,” said Xing Zhang, a post-doctoral research associate in the Rensselaer Department of Chemistry and Chemical Biology working in the Linhardt Labs. “At Rensselaer, we developed sophisticated NMR and mass spectrometry techniques that ensure the high quality and purity of synthesis.”

Heparin, which has been in use since the late 1930s, is an anticoagulant. There are three main types of heparin: unfractionated heparin, the more highly processed low molecular weight heparin (LMW) – both of which are extracted from pig intestines – and fondaparinux, a wholly synthetic ultra-low molecular weight heparin. Worldwide sales of heparin are estimated at $4 billion annually, and LMW heparin makes up more than half the U.S. market for heparin.

In a 2014 paper published in Nature Chemical Biology, a team led by Linhardt and Jian Liu, a UNC professor and former student of Linhardt, announced creation of a synthetic version of LMW heparin. Synthesizing LMW heparin allowed them to make many improvements on the animal-derived form of the drug currently available. Up to 5 percent of patients receiving heparin experience some form of uncontrolled bleeding, but naturally derived LMW heparin does not fully respond to a protamine, a Food and Drug Administration-approved antidote to unfractionated heparin. The researchers altered the molecular structure of the synthetic version so that it is neutralized by protamine. Naturally derived LMW is also cleared from the body through the kidneys so the researchers altered the synthetic version to make it safer for renally compromised patients.

The natural form of the heparin was in the spotlight in spring 2008 when more than 80 people died and hundreds of others suffered adverse reactions to it, leading to recalls of heparin in countries around the world. Authorities linked the problems to a contaminant in raw natural heparin coming from China. Linhardt has devoted his career to developing a safe, synthetic alternative to drugs like heparin to eliminate the risk of similar catastrophes.

The research was led by Liu, Linhardt, and Jawed Fareed, a professor of molecular pharmacology and therapeutics at Loyola University. “Synthetic oligosaccharides can replace animal-sourced low-molecular weight heparins” was supported by the National Institutes of Health.

Linhardt’s research is enabled by the vision of The New Polytechnic, an emerging paradigm for higher education which recognizes that global challenges and opportunities are so great they cannot be adequately addressed by even the most talented person working alone. Rensselaer serves as a crossroads for collaboration — working with partners across disciplines, sectors, and geographic regions — to address complex global challenges, using the most advanced tools and technologies, many of which are developed at Rensselaer. Research at Rensselaer addresses some of the world’s most pressing technological challenges — from energy security and sustainable development to biotechnology and human health. The New Polytechnic is transformative in the global impact of research, in its innovative pedagogy, and in the lives of students at Rensselaer.