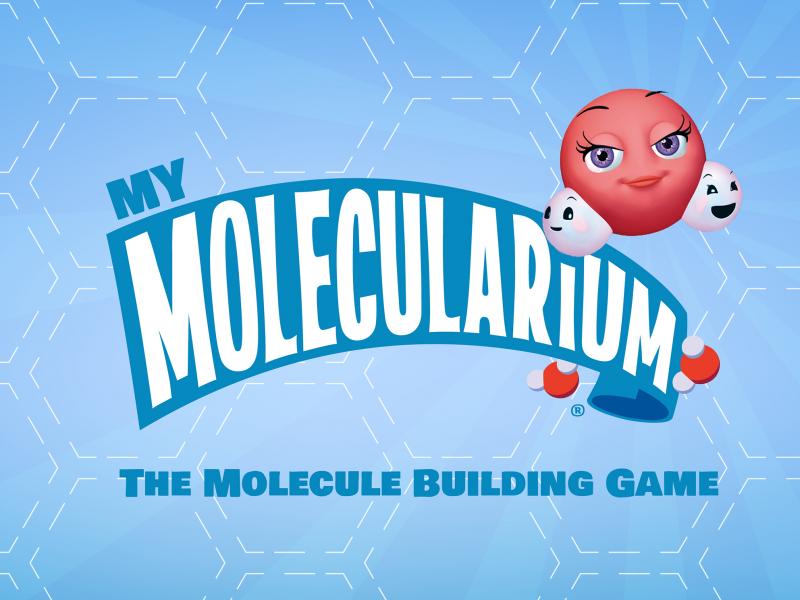 The free My Molecularium app is available at molecularium.com.

Gamers of all ages will be blown away by a new free app called My Molecularium, a fun, action-packed molecule building game. This fast-paced, free game app challenges players to build a wide variety of fascinating molecules, from H2O and vitamin C to caffeine and adrenalin.

My Molecularium is available for free at the Apple App Store or Google Play today. Or, you can access it here: http://molecularium.com/MyMolecularium.html

The action-oriented app is played by launching atoms at target bond sites to assemble molecules of increasing complexity and difficulty. Players aim and launch their atoms by moving their device using innovative laser-guided gyroscopic technology. The object of the game is to create as many molecules as you can in the shortest period of time. Fun facts about each molecule are shared with players, along with an accuracy bonus for each completed molecule. A wide range of achievements can be earned as players advance through the different levels, each with their own challenges.

The app is the latest effort of the successful Molecularium® Project, spearheaded by faculty at Rensselaer Polytechnic Institute and funded by the National Science Foundation and others to excite audiences of all ages to explore and understand the molecular nature of the world around them. “It’s a fun, challenging game for all ages. Everyone can have a great time learning about the structures of a variety of important molecules while they play,“ said Richard W. Siegel, founding director of Rensselaer’s Nanotechnology Center and one of the innovators behind the Molecularium Project. “This game app was the next logical step in continuing to expand our innovative educational productions that make learning about science great fun.”

The app opens with an animated trailer from the Molecularium Project’s giant-screen animated adventure film Molecules to the MAX!  Players then get started by launching atoms to assemble molecules, including water, methane, propane, fructose, and others of increasing complexity and difficulty. Players move their device to aim the atoms needed to build a molecule, earning points and learning chemical and structural formulas as they make their way through three levels of 33 essential molecules, all of them depicted by accurate 3-D molecular models. Other features include variable speed atom launch control and a rapid-fire power up that is available as an in-app purchase. A leaderboard allows players to check out their scores and achievements, and they can then challenge their friends with their best high score and share scores via social media.

The familiar faces of Oxy, Carbón, and the crew of atom characters from Molecules to the MAX! are featured in My Molecularium. The computer from the film, Mel, guides players through the game and shares fun facts and details about each of the molecules with the players. For example, after building H202, Mel shares that rainwater contains hydrogen peroxide, and that it makes plants grow faster.

The innovators behind the app project—Richard W. Siegel, the Robert W. Hunt Professor of Materials Science and Engineering at Rensselaer, and Kurt Przybilla, producer—joined forces with a highly regarded professional team of artists, animators, and web developers to create the new game app.

In addition to the My Molecularium game app, the Molecularium Project's educational media include: Molecules to the MAX!, originally made for IMAX and other giant-screen theaters, and now available on DVD and Blu-ray and soon to be streaming; NanoSpace®, winner of the Center for Digital Education 2013 Best of the Web award, an online educational amusement park, which includes more than 25 fun, interactive and educational games, short animated films and activities; and the digital-dome experience Molecularium-Riding Snowflakes, a 23-minute, award-winning show that introduced the characters Oxy, Carbón, Hydra and Mel.  The project has also developed extensive free educator resources for K-4 and 5-8 for teachers, homeschoolers, and informal science educators.

These resources, NanoSpace, and further information about the project and its media, can be found at http://www.molecularium.com.